KIERAN TIERNEY has talked about the difficulty of leaving Celtic following this afternoon’s record-breaking £25million switch to Arsenal.

The Scotland international left-back finally agreed a five-year deal with the London side this afternoon after weeks of speculation.

Tierney, 22, who made his Hoops debut just over four years ago, admitted he had “lived my dream”, but it was “the right time” to take up a new challenge with the Gunners.

The defender, speaking to the Arsenal website, said: “I had to speak to my family and my close friends and my agent as well because it’s a hard decision to leave a club that you love so much.

“People need to know that as well. I feel Arsenal is a massive club and it’s a great opportunity for me as well. I’m delighted to be here. 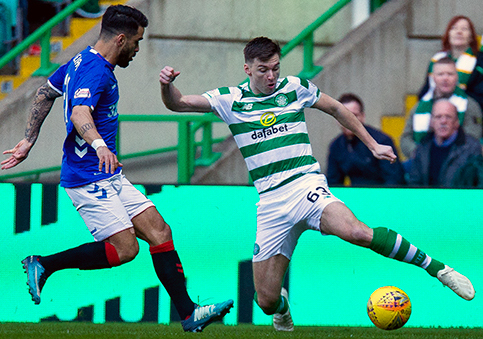 THE LAST HURRAH…Kieran Tierney in action in his final appearance against the Ibrox side in March.

“But when you get older… I’ve done that, I’ve made my dream, I’ve lived my dream and I’ve loved every single minute of it.

“Now I just feel was the right time to take a step on. I feel this is a great opportunity for me.”

Tierney added: “It feels great. I’m delighted to be here. Obviously, I’m injured now, but I’m just looking forward to getting back on the pitch, training and getting involved with the squad.

“It’s been fine for me. I’ve been working hard in rehab and I’ve had good people around me as well. It’s been easy for me.

“At Celtic I was training hard, working hard and just looking to get back fit. That was my main focus.

“I got told at seven o’clock last night that I had to be at the airport in an hour, so I had to go quickly.

“I was actually down the park with my friends training. They play with their local team, so I was down watching them and I got a phone call that I needed to go.

“I got to the airport and the flight was delayed two-and-a-half hours, with another hour’s drive for a hotel and I probably got zero sleep, so I was back up at half five today.”

Tierney has made only nine first team appearances for the Hoops in 2019 and hasn’t featured in the pre-season following a double hernia operation at the end of the season.

He has been sidelined with a pelvic problem and his last outing for the club was the 3-0 Scottish Cup semi-final triumph over Aberdeen at hampden on April 14.

Jonny Hayes was in his left-back position during the 2-1 Scottish Cup Final victory over Hearts on May 25 when the Parkhead men sealed the historic treble treble.