HIBS defender Darnell Johnson has been hit by a two-match ban for serious foul play.

The on-loan Leicester City full-back was booked by referee Craig Thomson for his wayward challenge – branded “clumsy” by Hoops boss Brendan Rodgers – on Emilio Izaguirre eight minutes from the end of the champions’ 2-0 win at Parkhead last Wednesday. 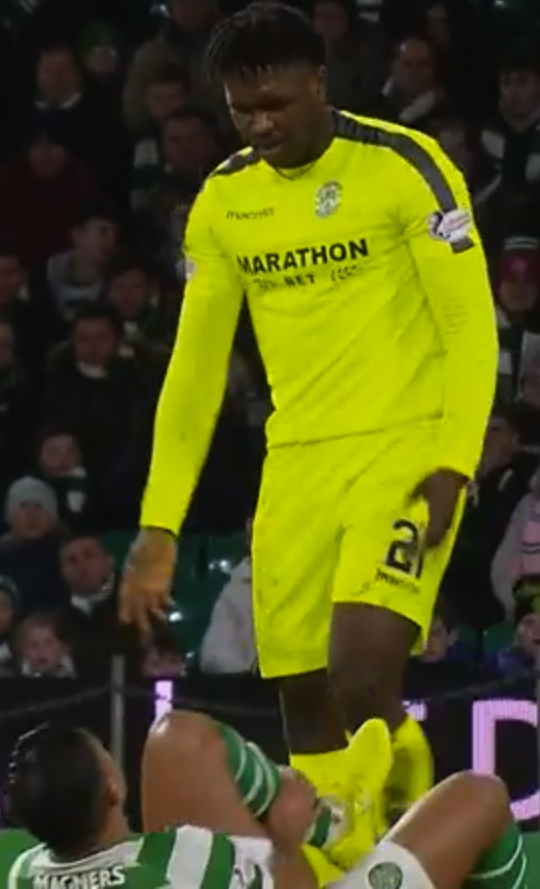 DOWN AND OUT…Emilio Izaguirre is grounded following Darnell Johnson challenge.
The Honduran had to be stretchered off with an ankle injury and he missed Sunday’s Scottish Cup 5-0 mauling of St Johnstone.
Izaguirre is also a major doubt for the visit of Valencia in the Europa League on Thursday.
Johnson, who was making his debut for the Easter Road side as a second-half substutute, was handed a notice of complaint by the SFA and the two-game suspension was confirmed at a disciplinary hearing at Hampden Park.
Celtic and Hibs will meet again next month in the Scottish Cup quarter-final at Easter Road after last night’s ballot.
Click Here for Comments >
Share. Twitter Facebook Google+ Pinterest LinkedIn Tumblr Email
Previous ArticleEdinburgh twice in a week, tough fixtures loom for Celtic
Next Article PRAISE INDEED! ‘PLAYERS ARE ABSOLUTELY AMAZING,’ RODGERS