Celtic Quick News on News Now
You are at:Home»Latest News»JACKIE ON THE BRINK
By CQN Magazine on 6th October 2016 Latest News
FORMER Celtic skipper Jackie McNamara has one game to save his job as manager of York City.
The ex-international defender has watched his team struggle in the National League and they were walloped 6-1 on Tuesday by rock-bottom Guisley, who had previously not won a game. 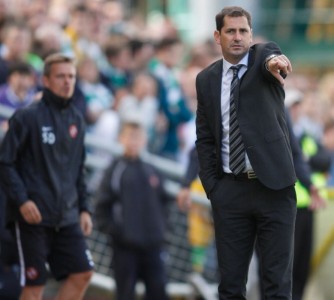 McNamara, 42, who has also managed Partick Thistle and Dundee United, held discussions with chairman Jason McGill yesterday and it has been decided he will quit if the team do not gain a “positive result” against fellow-strugglers Braintree Town at the weekend.
A club statement read: “Following a meeting with the chairman this morning and in light of the disappointing performance and result last night, York City manager Jackie McNamara has considered his position going forward.
“It has been decided that, if the team fails to gain a positive result at Braintree Town on Saturday, the York City manager will tender his resignation.”The manager will be looking for a passionate and committed reaction from the players after the capitulation at Nethermoor Park on Tuesday evening.”City were relegated from the English league’s fourth tier last season and McNamara, who was appointed team boss last November, embarked on a major overhaul of the squad during the summer.

However, they have claimed only 12 points from their 14 games during this campaign and sit just one place above the relegation zone following their defeat at Guiseley, which extended their run without an away victory to 29 games.