SAIDY JANKO is hoping to impress Brendan Rodgers and make up for lost time after last season’s false start.

A complicated ankle injury curtailed Janko to a mere 13 appearances, but with Mikael Lustig still working on his fitness levels, there is the opportunity for the 20-year-old to stake a genuine claim for the right-back berth.

He said: “The manager has been very positive with me and the rest of the squad. He gives me a lot of advice and he’s encouraging me, too. I’m motivated to do well for Celtic and the manager. 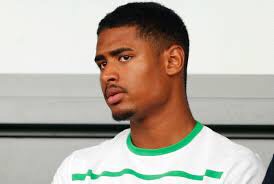 “This is a fresh start for me at Celtic. That’s the case for everyone, to be honest. The manager wants to take us to the Champions League and everyone is giving their all.

“It motivates me to be involved again and I know that’s the case for a few of the other guys, as well.”

Janko admitted last year was just about a write-off, He said: “It was very frustrating. I got kicked in training and some of the ligaments went in my ankle.

“I was out for five months, but they originally said it would heal naturally in eight to 12 weeks.

“It didn’t and I had to have the operation, so I was out again for eight to 12 weeks. That was the problem.

“I was devastated. I got a few starts for Celtic and I was also doing well with the national team.

”It was very hard for me. Football is everything and it was my first serious injury, but my family, friends and the club helped me get through it.

“Celtic is a big family and everyone is supportive, especially the foreign players such as Dedryck Boyata, Nadir Ciftci and whoever else helped me through it.

“My family were also the main people who helped me through it.

“They are still in Zurich but my girlfriend came over after it happened and then my mum and dad, along with my brother.”

He added: “I’m fully fit now. Obviously, everybody needs to get their match fitness and that’s why we have had so many friendlies because these qualifiers are so important.

“The main thing is to get the fitness back now.

“I’m just looking forward to the new season. It was very frustrating, but it’s good to be back.”

Get your copy of the hilarious book that the Zombies tried to ban! Have a great laugh at both Ibrox clubs – living and dead – only at www.cqnbookstore.com – you will love it!