IT all went downhill after 57 seconds at the Parc des Princes this evening.

Celtic got off to the sort of start no-one would have dreamed of when Moussa Dembele thrashed in the opening goal – the first Paris Saint-Germain have conceded in five Champions League games this season. 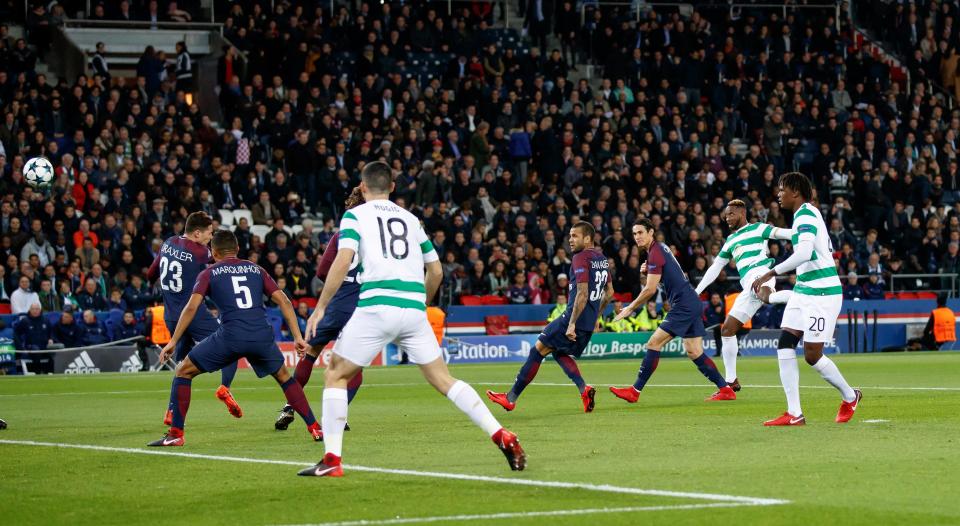 However, the dream disintegrated into a nightmare as the expensively-assembled French outfit came back and set about a hesitant Hoops team that surrendered possession far too easily and didn’t take care of fundamental duties in defence.

Brendan Rodgers’ team’s cause wasn’t helped when Mikael Lustig limped out of the affray after only 18 minutes with what looked like a twisted knee injury.

Nir Bitton took his place and looked as comfortable as a giraffe on ice. The Israeli has many talents, but playing wide right in defence is not one of them. He proved that conclusively on this occasion.

Neymar was allowed to strut his stuff, Edinson Cavani was terrorising Dedryck Boyata and Jozo Simunovic in the heart of the danger zone and Kylian Mpabbe was popping up in unguarded areas with far too much regularity to be comfortable or acceptable.

The defence switched off in key moments and paid a heavy price. They had been warned in Glasgow what this team could do if you presented them with opportunities. Five times Craig Gordon had been required to pick the ball out of his net in Glasgow. 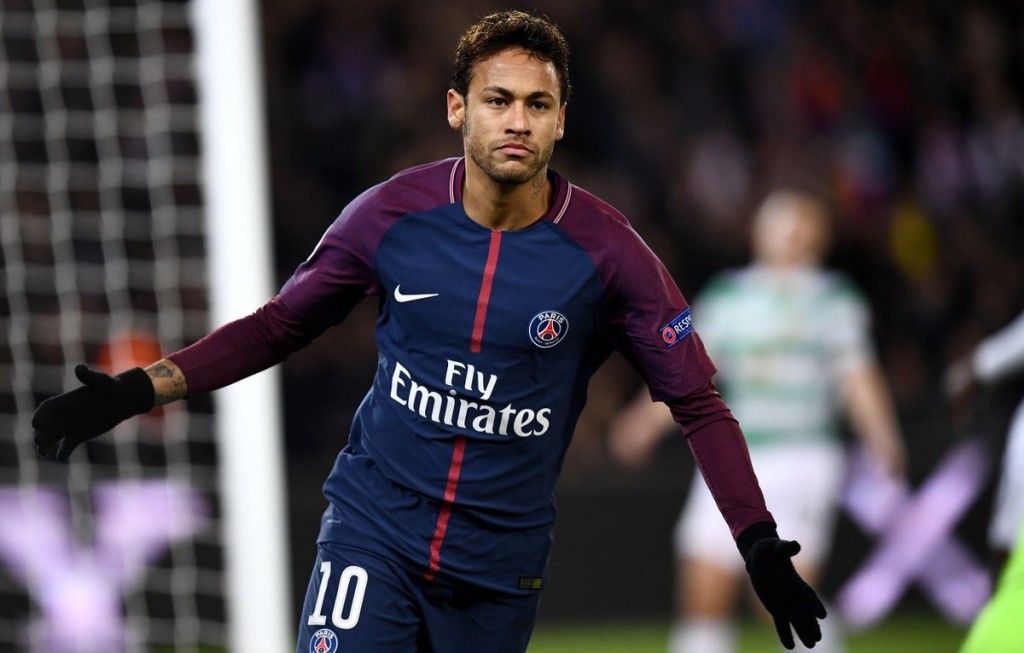 This time around, the Scottish international was beaten four times in 26 first-half minutes as defenders went AWOL and the French swarmed around his 18-yard box with an eagerness and awareness not matched by the visiting players. In the end, seven goals were walloped behind him.

What a start, though. Celtic had two touches of the ball and that was enough for keeper Alphone Areola to be beaten for the first time in the competition.

A bizarre passback shortly after their kick-off brought the Hoops a corner-kick on the right. Olivier Ntcham swung it to the edge of the penalty area where his French pal Dembele met it first time to send it looping high over the shoulder of Areola.

And then the roof collapsed. In the ninth minute a bad pass from Scott Brown was seized upon in midfield and fed through to to Neymar by Cavani.

The Brazilian hit it low across Gordon and the keeper was slow to react as it swept in at his far post. The Scotland international should have done better with his angles.

He looked rattled and that was highlighted when a dreadful clearance drifted out of play to present the French with a throw-in when he was under no pressure a couple of minutes later. 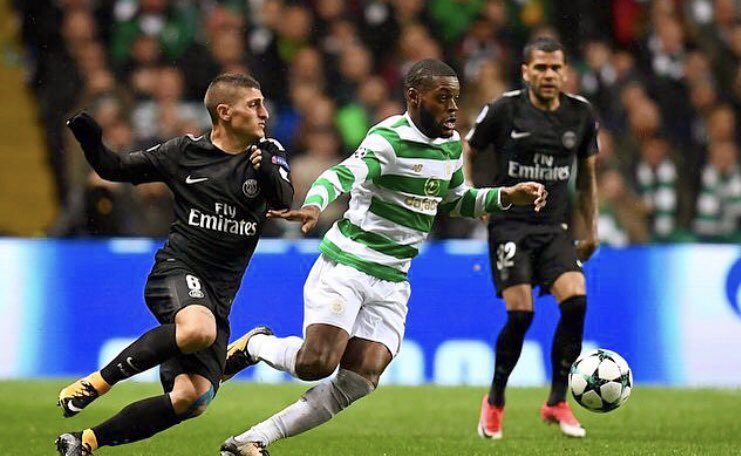 Celtic’s cause wasn’t helped when Lustig was forced to leave the field and Bitton came on in his place.

In the 21st minute, Dembele and Ntcham combined cleverly on the left, but the midfielder’s 25-yard drive zipped just wide of the keeper’s left-hand post with Areola at full stretch.

A minute later, it was 2-1 for the tournament favourites. A simple one-two with Marco Veratti through a static defence allowed Neymar a sight of goal and he tucked it away with Gordon helpless on this occasion.

At this stage, Celtic were all over the place, gifting possession, being dispossessed far too easily and looking for divine inspiration as they struggled to get into any sort of rhythm.

In the 38th minute, Bitton conceded a needless corner on the left and eventually it was swung into the box and Cavani won’t score an easier goal in his career as he steered it past Gordon from close range.

Seven minutes, a complete defensive shambles allowed Mpabbe to score No.4 when a free-kick created all sorts of problems.

A dreadful first-half came to a halt with the struggling Simunovic and Bitton booked.

Greek referee Tasos Sidiropoulos ignored a late penalty-kick plea when Dembele went down, but the calls were more in hope than expectation. 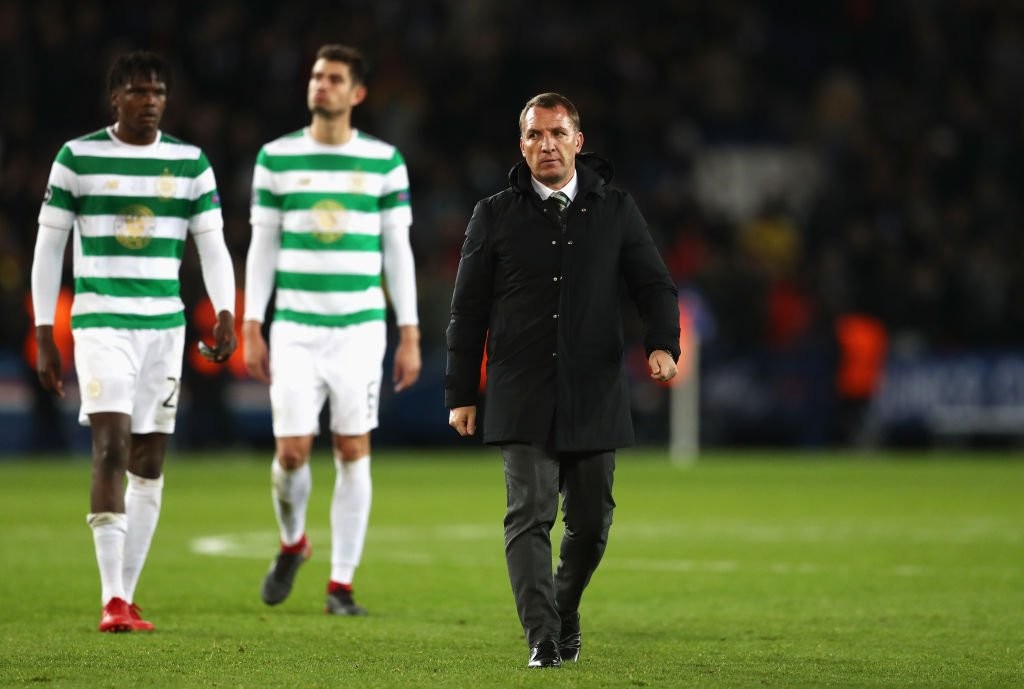 The second-half was memorable only for the final whistle. It had been that sort of evening in the French capital.

There were far too many misplaced passes to help Celtic’s cause, so many of them not enforced errors. There is little point in naming the players who failed to respond to the challenge, but they will know who they are and they will also realise they will have to react with more determination to such tasks and tests in the future.

PSG completed the game with three goals in six minutes with Veratti getting the fifth when Mpabbe outpaced Tierney on the flank to deliver the ball inside.

Brown inadvertently knocked it in front of Veratti and he gleefully slammed it low past Gordon to his right.

In the 79th minute, Cavani fired one into the net off the inside of Gordon’s far post and the misery was complete moments later when the Hoops shotstopper misjudged a 25-yard effort from Dani Alves that escaped his clawing right hand.

And that was that. PSG had 10 shots on target and seven found their way past Gordon. Twelve conceded in two games against admittedly world-class opposition. 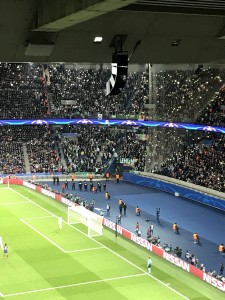 It’s time now for the players to dust themselves down and go again with silverware up for grabs at Hampden on Sunday.