CQN is turning the spotlight once again on the Celtic players who never had the honour of playing for their country.

Joe Miller was a fabulous addition to Billy McNeill’s centenary double-winning squad when he arrived from Aberdeen in November 1987.

He became part of McNeill’s Three Musketeers along with Frank McAvennie and Andy Walker as the Hoops swept all before them. Despite his consistent form and crucial goals, he was never deemed good enough to achieve a full Scotland international cap.

Here is Joe’s story in another EXCLUSIVE CQN feature.

JOE MILLER snapped on to a fatal error from Gary Stevens to drill the ball behind Rangers keeper Chris Woods for the only goal of the 1989 Scottish Cup Final.

The sun shone on Hampden that afternoon as jubilant Celtic fans roared: “Where’s your treble gone?”

The slight and pacy winger, signed by Billy McNeill from Aberdeen on November 13 1987, had silenced Graeme Souness and Co who had gone into the showpiece promising their fans they would complete a domestic clean sweep.

However, Miller and the holders of the trophy, 2-1 winners over Dundee United the previous season in the Hoops’ memorable centenary year, had other ideas and it was Joe who made the Ibrox men eat their words. 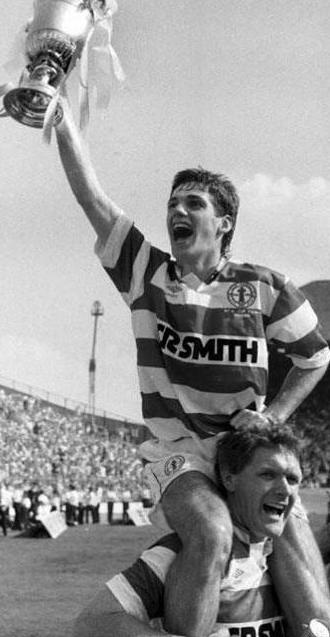 Miller, of course, had been a key player for Billy McNeill on the lead-up to Hampden. Without the goal threat of Frank McAvennie who had returned to West Ham, the player took over as attack-leader and claimed the only strikes of the league wins over Hibs and St Mirren before completing his own particular hat-trick at the national stadium.

The Glaswegian, born seven months after the epic Lisbon win in 1967, liked to do things in style as he demonstrated so capably when he scored on his debut at Parkhead 24 hour hours after arriving from the Pittodrie side in a £650,000 switch. He rifled in one against Dundee in McNeill’s side’s 5-0 triumph on their way to that season’s league championship.

In season 1992/1993 he was reunited with the returning McAvennie, but the old magic failed to sparkle on this occasion.

Injuries blighted Miller during the reign of Liam Brady and he was sold to Aberdeen to raise funds to bring in Hibs midfielder Pat McGinlay.

The exciting raider, now 53, claimed 33 goals in 150 starts for the Hoops and was an electrifying sight in full flight during the team’s league and Cup double success when the club celebrated their 100th birthday.

However, despite Miller’s dazzling displays on the wing and through the centre, there was no call-up for the Scotland international team.