Celtic Quick News on News Now
You are at:Home»Football Matters»‘JOHANSEN NOT FOR SALE,’ DEILA
By CQN Magazine on 22nd January 2016 Football Matters
RONNY DEILA insists Stefan Johansen in NOT for sale and there is no chance of the Celtic midfielder moving to Aston Villa.
The Premier league strugglers were yesterday linked with a £5million bid for the Norwegian international who has 18 months remaining on his contract. This appeared in a Scottish edition of an English newspaper but there was nothing in their English edition. A quick look at the Villa media yesterday failed to produce any further insight or comment on the Birmingham’s club’s interest in Johansen. 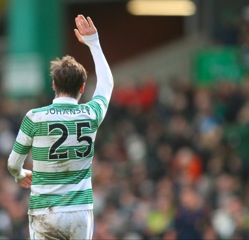 Ex-boss Neil Lennon brought Johansen to Parkhead in a £2million deal from Deila’s former side Stromsgodset in January 2014, a fact that one Scottish journalist got wrong yesterday, stating that Ronny Deila had signed the player for Celtic.
Johansen played his 100th competitve game for the Hoops in the 4-1 win over Dundee United at Tannadice a week ago. His form has shaded during this campaign, but his gaffer is adamant he will not be leaving the club.

Deila admitted: “We want to keep every player here.

“Stefan Johansen is staying here and, of course, we want to keep him.”

Meanwhile the champions are still weighing up a move for Ljuban Crepulja, the 22-year-old Croatian midfielder who is currently at the club’s Lennoxtown training complex.

Deila said: “He’s a player we’ve watched a little bit, but we want to see more of.

“Now he’s training with us and we’ll see during the week if we want to do anything further.”
The midfield anchorman is out of contract at the end of the season and Celtic could get him from his club Slaven Belupo for a bargain £300,000 if Deila decides to make a move this month.
The manager also confirmed new £2million signing Erik Sviatchenko will have to wait for his debut as the central defender will not be ready to face St Johnstone at Parkhead tomorrow afternoon.
He added: “It’s too early for him and he needs some training sessions with the team before he’s ready for his debut.
“Erik will  be at Saturday’s game, but he won’t be available to play.”
Celtic remain active in the transfer market with at least one more expected in and hopefully a few on the extreme fringe of the first team heading in the other direction, hopefully to Holland.