Johnny Doyle was a £90,000 signing for the Hoops in 1975 – the club’s record fee at the time – and he became a player who never gave less than 100 per cent for the cause. However, he was never deemed as a Celt good enough to get into a Scotland international squad.

Here is Johnny’s story in another EXCLUSIVE CQN feature.

IT is highly unusual for a player to be honoured by his country while playing for a provincial club, win a move to Celtic – and then be shunned at international level for the rest of his career.

However, that’s exactly what happened to Johnny Doyle, one of the most committed players in the club’s history. The tricky little winger became the first Ayr United player to be capped in forty-four years when he was called up for a European Championship confrontation with Rumania at Hampden in December 1975.
It ended in a 1-1 draw and, by all accounts, the newcomer turned in an accomplished performance mixing in the company of Kenny Dalglish, Andy Gray and Archie Gemmill. Four months later, Doyle achieved his absolute football dream – he signed for Celtic.
Jock Stein was still recovering from his near-fatal car crash at Lockerbie in the summer of 1975, but he was canny enough to sanction a £90,000 bid for the Somerset Park player. Ayr United were happy with the fee they received for a youngster they picked up for nothing from Viewpark Boys’ Club in 1970 and, as you might expect, there was no haggling over wages from Doyle.
Ironically, he signed for the club – a record for Celtic and £10,000 more than they paid Partick Thistle for Ronnie Glavin – at Glasgow Airport as they prepared to fly out to East Germany for a European tie against Sachsenring Zwickau.
Doyle had just completed a 21-day SFA suspension – for being ordered off against the Hoops in a Premier League game at Parkhead!
Comparisons, of course, were immediately made with Jimmy Johnstone, who, ironically, also hailed from Viewpark in Uddingston, which were unfair. Johnny Doyle was good, but not THAT good! Who was? 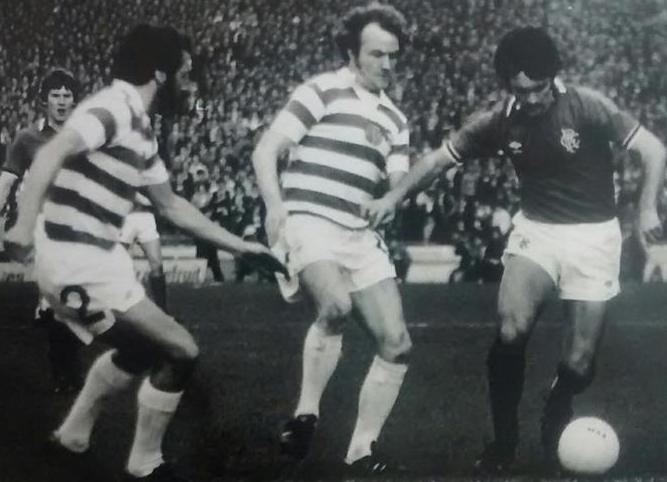 JOHNNY BE GOOD…winger Johnny Doyle, aided by Danny McGrain, puts the pressure on Rangers’ Davie Cooper.
He came into a first team that was struggling during a period of transition on and off the field. The touchline terror missed a chunk of the run-in to the campaign after being injured on his debut against Dundee at Dens Park a few days after signing. The following season, though, he was in the line-up that clinched the title against Hibs at Easter Road and was a regular in the No.7 shorts.
Doyle had a temperament that attracted attention and unwanted headlines. He was red-carded the unforgettable evening in the east end of Glasgow when Celtic overwhelmed Rangers 4-2 to clinch the championship in May 1979. The spectacle is now in Hoops folklore as ‘The Night Ten-Men Won The League’. Doyle even played a part in the club’s history when he was AWOL!
He died tragically young at the age of thirty after an accident at home in Kilmarnock in October 1981. His passing saddened the Celtic family who realised just how much the club meant to him.
Doyle, in fact, could have picked up hefty signing-on fees at Motherwell and Hearts when it looked as though his days at Parkhead were numbered after the introduction of Davie Provan to the outside-right berth. But he pledged to remain and fight for his place.
Although he was good enough for Jock Stein and his successor Billy McNeill, he never again pulled on the dark blue of his country. Football is littered with such bizarre tales.
Click Here for Comments >
Share. Twitter Facebook Google+ Pinterest LinkedIn Tumblr Email
Previous ArticleHOOPS STEP UP KEEPER SEARCH
Next Article HOOPY BIRTHDAY, CALMAC