MIKEY JOHNSTON has been made aware of Neil Lennon’s demands with the new season’s kick-off only a fortnight away.

The slightly-built winger cemented his breakthrough campaign with a start in the Scottish Cup Final against Hearts at Hampden a month ago.

However, Johnston had already been replaced by Scott Sinclair in the 71st minute when Odsonne Edouard clipped in his second goal of a historic afternoon to complete the phenomenal treble treble.

Lennon now expects the exciting 20-year-old raider to become a 90-minute man to meet and overcome the rigours of a crucial term at home and abroad.

Johnston claimed five goals in 23 appearances – 12 from the subs’ bench – and the Irishman expects that progress to continue in the forthcoming months. 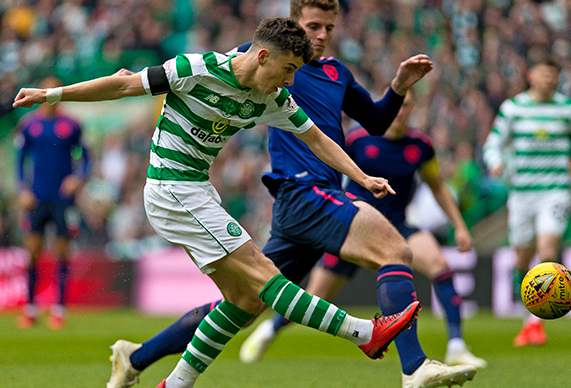 BY THE RIGHT…Mikey Johnston thumps in  the first of his two goals in the league win over Hearts last month.

The Hoops gaffer, speaking to the Evening Times, said: “It’s a big season for Michael because it’s the next one.

“I like him. He needs to get fitter and more robust – and he’s been told that.

“He came off in the Youth Cup Final and Scottish Cup Final with cramp. But we need to look at the conditioning of all the players who aren’t playing on a regular basis.

“We maybe need to work them a bit more during the season so they are up to speed when they come in.

“Vakoun Issouf Bayo went away with the Ivory Coast and ruptured his hamstring. Jack Hendry picked up an injury in that area, too.

“We need to stay on top of those boys and make sure they are getting as much work as those who are playing.

“We can’t have them being at risk of injury 60 or 70 minutes into games. Michael falls into that category, but we believe in him – he started the Cup Final.

“That was a shot in the arm for him and he has a lot of talent.”

Johnston is hoping to play his part when the Parkhead men face FK Sarajevo in Bosnia in the first leg of the Champions League qualifier in two weeks’ time.