Celtic Quick News on News Now
You are at:Home»Latest News»JOTA OR KENT? WHO DO YOU PREFER? ASKS SUTTON
By CQN Magazine on 23rd October 2021 Latest News

CHRIS SUTTON is urging his old club Celtic to splash the cash to secure £6.5million-rated Filipe Jota’s future at the club.

The 22-year-old winger agreed a season-long loan from Benfica in the summer and has proved to be an instant hit with the Hoops fans.

Sutton, who cost £6million when Martin O’Neill signed him from Chelsea in June 2000, reckons the Portuguese flyer would prove to be value for money.

The one-time England international frontman has even compared the new Bhoy with Steven Gerrard’s key player Ryan Kent – and asked the supporters who they would prefer in their first team. 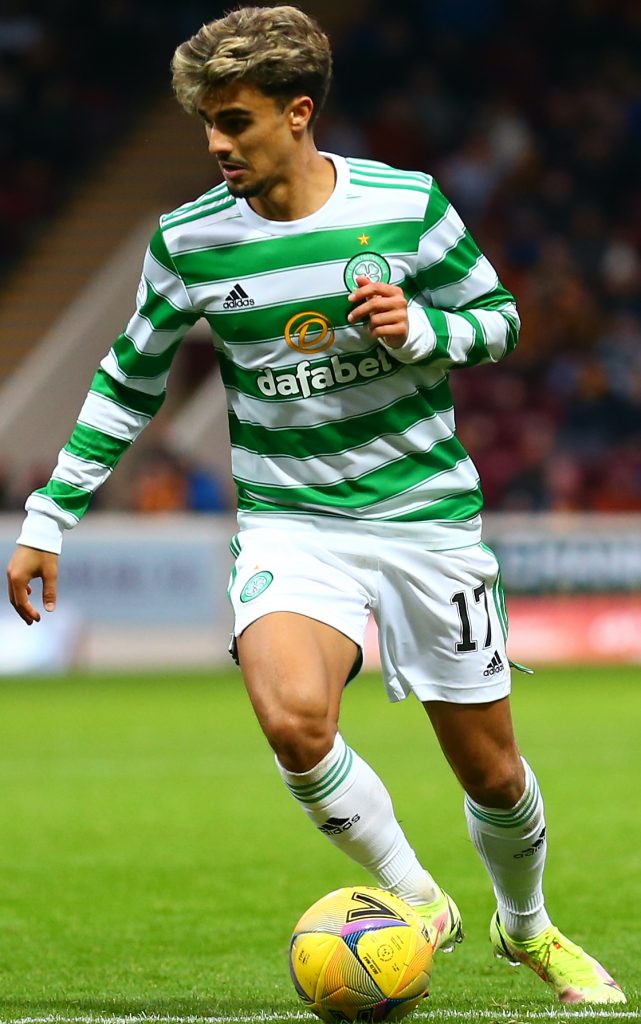 ON THE BALL…Filipe Jota lights up proceedings with his electrifying skills.

Sutton said: “Ange Postecoglou has asked fans to put their faith in him, to believe in his methods and trust his judgement.

“I get the sense most supporters are doing just that.

“The Celtic board need to trust him, as well – and that means backing him when January comes and beyond.

“It also means getting ready to get the cheque book out next summer to secure Jota on a permanent deal.

“I don’t know the ins and outs of his contract situation at Benfica, but if it’s right about Celtic having first dibs on the winger for £6.5million, then they should be ring fencing the dosh right now.

“Jota is only in the door five minutes, but we’ve already seen enough to suggest he is more than decent and you suspect there is even more to come. 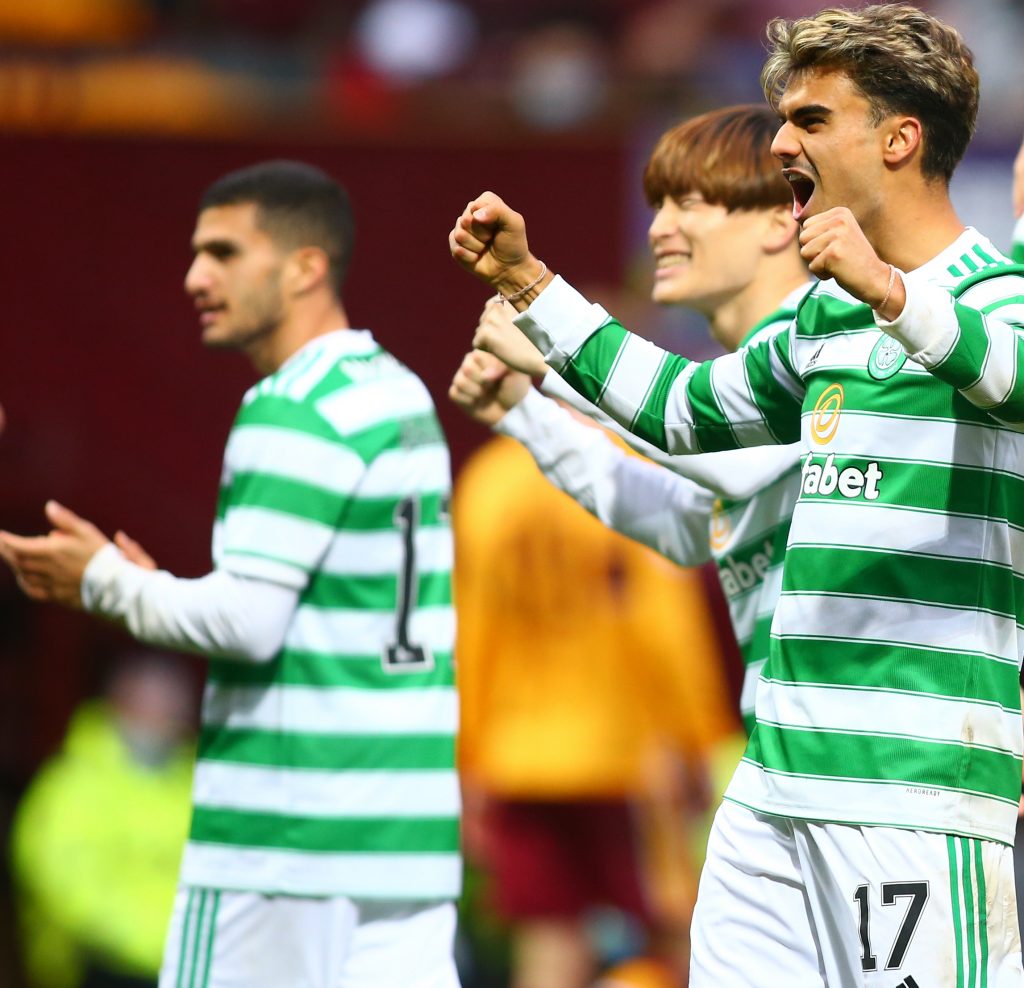 THREE CHEERS…Liel Abada, Kyogo Furuhashi and Filipe Jota celebrate with the Celtic fans after the 2-0 win at Motherwell.

“Six and a half million quid is a lot of money to Celtic. It’s not a sum they’ve stumped up too often over the years.

“But I would spin it around – could they afford not to splash that kind of dosh on a player who will have had a season under his belt at Parkhead?

“Put it another way. Ryan Kent cost Rangers £7million. Who would Celtic fans rather have in their side?

“Kent had a good season last year, but he blows hot and cold. Jota was thrown in to this Celtic side and he’s delivered from the get go.”

Sutton, speaking to the Daily Record, added: “People have gone daft for his pass the other day for Kyogo’s goal against Ferencvaros. It was a terrific ball. But Jota is no one-hit wonder. He’s done the business so far, with big goals and huge contributions and it will be interesting to see how he gets on when he’s fully settled.

“But it is clear Postecoglou can be trusted in the transfer market. 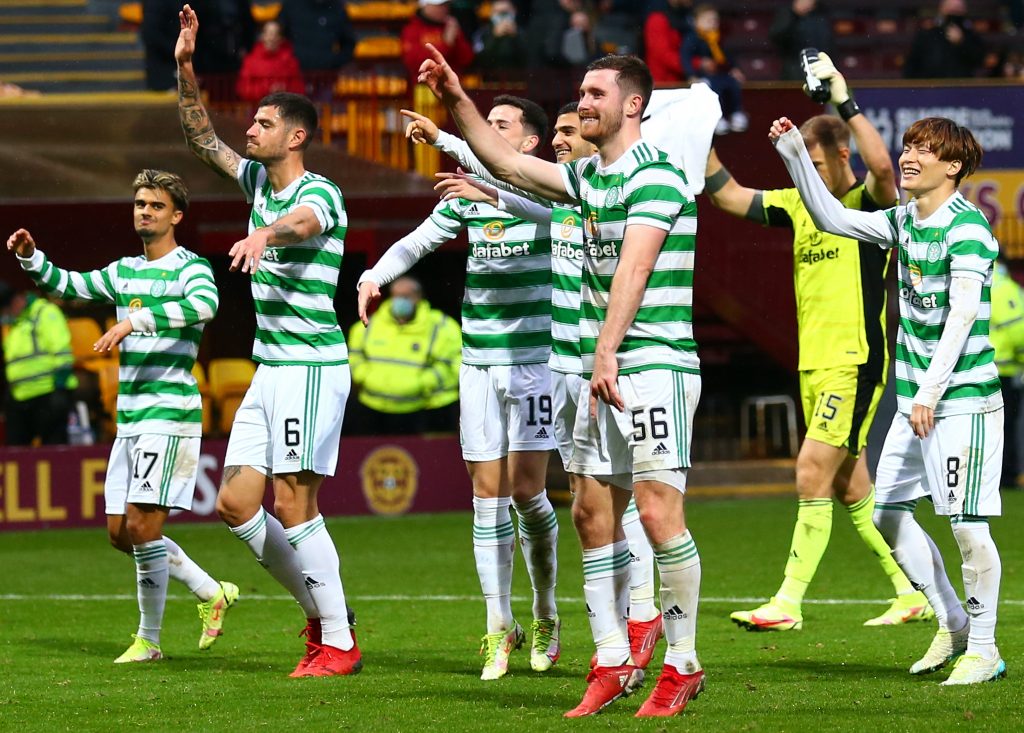 DIDN’T THEY DO WELL…Filipe Jota and his Celtic team-mates share the joy after the victory at Fir Park.

“Listen, no manager has a 100 per cent strike rate when it comes to signings. There are always going to be players who simply don’t work out.

“Postecoglou brought in 12 players in the summer and the jury is still out on a few of them.

“But when you look at the impact of his attacking signings, he certainly has an eye for frontmen.

“Kyogo, Jota and Liel Abada have all made an impact at that end of the pitch.

“We’ll need to see how the ones at the back get on after a bumpy start, but there are no issues at the other end of the pitch.”

The Hoops forwards will hope to endorse those words of the former Celtic attacker when they take on St Johnstone in Glasgow today.