Celtic Quick News on News Now
You are at:Home»Latest News»JOTA: THE BIG QUESTION
By CQN Magazine on 8th May 2022 Latest News

FILIPE JOTA was in the doldrums this time last year as his loan deal with Spanish outfit Real Vallodolid was coming to an end with the team about to lose their La Liga status.

The Portuguese flyer scored one goal in only seven league starts for the struggling team in a season to forget.

A year down the line, Jota’s name was ringing out at Parkhead yesterday as the 23-year-old winger turned in a Man of the Match performance in the 4-1 triumph over Hearts that all but sealed the Premiership title for Celtic.

The flamboyant forward set up the equaliser for Daizen Maeda with a superb burst through the Tynecastle outfit’s defence and an astute pass for the Japanese hitman to stroke under the exposed Craig Gordon. 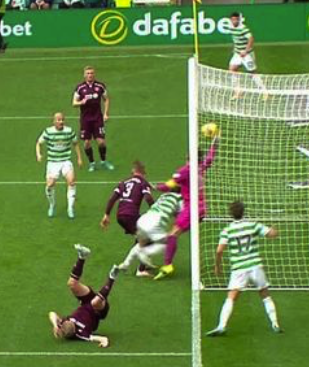 OVER THE LINE…Filipe Jota (No.17) gets a close-up view as Kyogo Furuhashi claims Celtic’s second goal in the 4-1 success over Hearts.

And Jota demonstrated utter determination to get to the back post to nod on a cross from the left to Kyogo Furuhashi to force over the line for the second goal.

The overall display from the gifted attacker eased the Hoops to a thoroughly deserved victory with further goals in the second-half from Matt O’Riley and substitute Giorgos Giakoumakis.

Now the big question is: Where will Jota be playing his football next season?

There have been consistent reports a permanent £6.5million contract is about to be sealed, but boss Ange Posetcoglou admitted there are no guarantees at the moment.

After witnessing another mesmerising show from the little sorcerer, the Hoops gaffer said: “I think Jota showed his love for the Celtic fans and this club. It was reciprocal.

“He understands. He’s humble enough to know that he’s got the talent, but he had the talent last year – you need the platform.

“This football club has given him that. In terms of next year, with him and Cameron Carter-Vickers, we’re in a similar boat.

“If everyone wants something to happen it’ll happen. 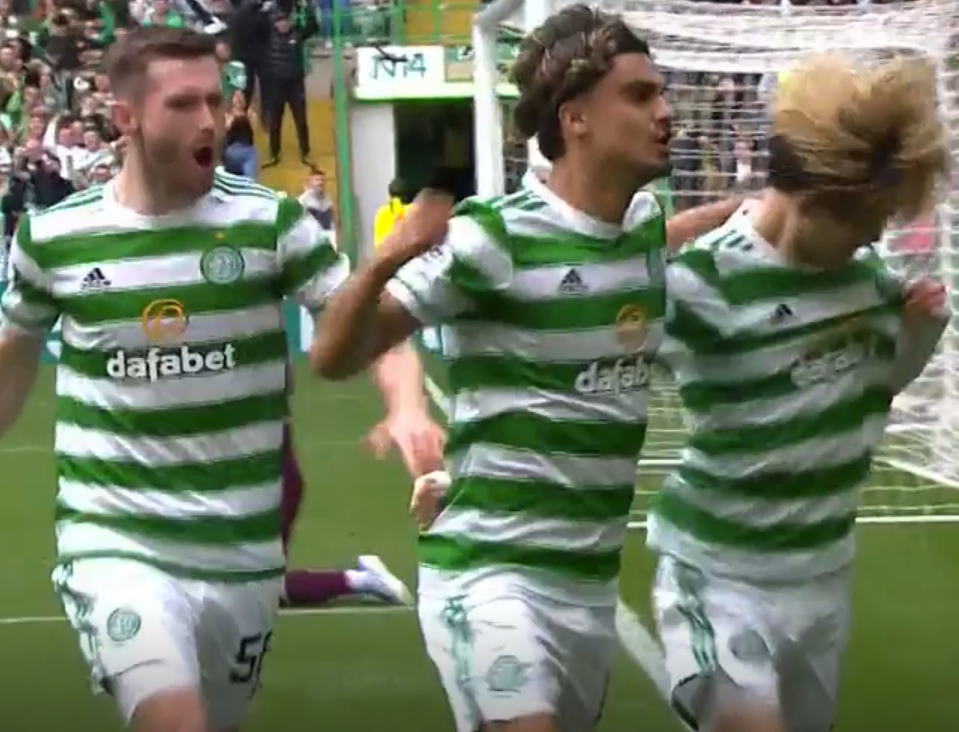 THREE CHEERS…Filipe Jota and Anthony Ralston congratulate Kyogo Furuhashi on his 18th goal of the season.

“But right now the most important thing is they represent this club to the best of their ability and bring success to Celtic.

“Some players might get an offer they can’t refuse. There’s no guarantee any of us will be here next season – I mean I hope I am, but apart from that!

“You have to focus on the present and Jota was great again.”

Postecoglou, speaking to the Sunday Mail, added: “The supporters have definitely played their part this year. Our home form has been ridiculous.

“We have hardly conceded any goals and we have scored so many. That’s been a collective effort.

“Through the rough beginning, the supporters stuck by us and gave us the encouragement we needed.

“They have been there for the journey, so we look forward to the next couple of games and hopefully we finish it off in style.”