Celtic Quick News on News Now
You are at:Home»Latest News»JOZO HEADS FOR HOOPS EXIT
By CQN Magazine on 31st May 2020 Latest News

JOZO SIMUNOVIC has played his last game for Celtic and will join Jonny Hayes among the Parkhead departures.

The 25-year-old Croatian central defender will leave the club in the summer after the champions decided against activating the year’s option on his contract.

Simunovic joined the Hoops in August 2015 for a fee of around £3.5million from Dinamo Zagreb and made 117 first-team appearances over his five years at the nine-in-a-row title kings.

Injuries hampered his development, but he was still a key player during his time at the Glasgow giants.

Hayes, who cost £1.3million when he arrived from Aberdeen in June 2017, had revealed on Instagram that he moving on, as CQN reported.

Boss Neil Lennon praised both players for their service after they played their part in clinching nine successive crowns. 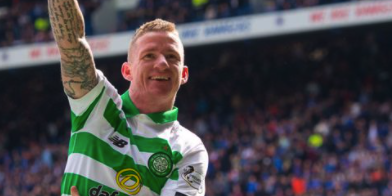 The Irishman said in a report in Sky Sports News: “I would like to sincerely thank both Jozo and Jonny, brilliant lads who have given their all to Celtic over a number of years.

“Jozo has been part of our great club for some time and has given us some wonderful times, playing a really important part in our success. Jonny, too, has been an important player for the club in recent years.

“Above all, both are great men and everyone at Celtic wishes Jozo and Jonny and their families all the very best for the future. We are sure they will continue to be successful in everything they do.

“Both players leave Celtic as Nine-In-A-Row champions, something they have earned, an achievement they richly deserve and something I know they will cherish dearly.”

Hayes, who will be 33 in July, played 61 times, scoring two goals. The most memorable was his late clincher at Ibrox in September when he raced more than half the length of the pitch to seal the 2-0 victory following Odsonne Edouard’s first-half opener.

The Hoops also moved on midfield misit Eboue Kouassi to Belgian outfit Genk during the week as Lennon continues to revamp his squad in the bid for the magical ten.