KRISTOFFER AJER has hailed his central defensive partner Jozo Simunovic with the duo preparing to keep Celtic’s back door locked as they head towards the silverware summit.

The Norwegian and the Croat combined again at an emotion-charged Parkhead at the weekend to shut out Kilmarnock – just one of a string of performances that have seen the rearguard concede a mere three goals in 19 domestic games in 2019.

And Simunovic even chipped in with a memorable headed winning goal as a fitting tribute to club legend Billy McNeill who passed away a week today at the age of 79.

Ajer is just 20 while his defensive team-mate is 24 which augers well for the champions with Dedryck Boyata poised to quit the club at the end of his contract in June while Filip Benkovic will  head back to Leicester City when his loan deal expires.

The double-act have performed together since the Belgian World Cup centre-half ruptured his hamstring in the 2-1 win over Steven Gerrard’s Ibrox side last month.

Scott Bain, who has now attained Scotland international status after becoming the Hoops’ mainstay No.1 at the turn of the year, has also been in form to defy opposing forwards as was witnessed on Saturday with several fine stops, including a crucial one v one situation with Chris Burke in the first-half. 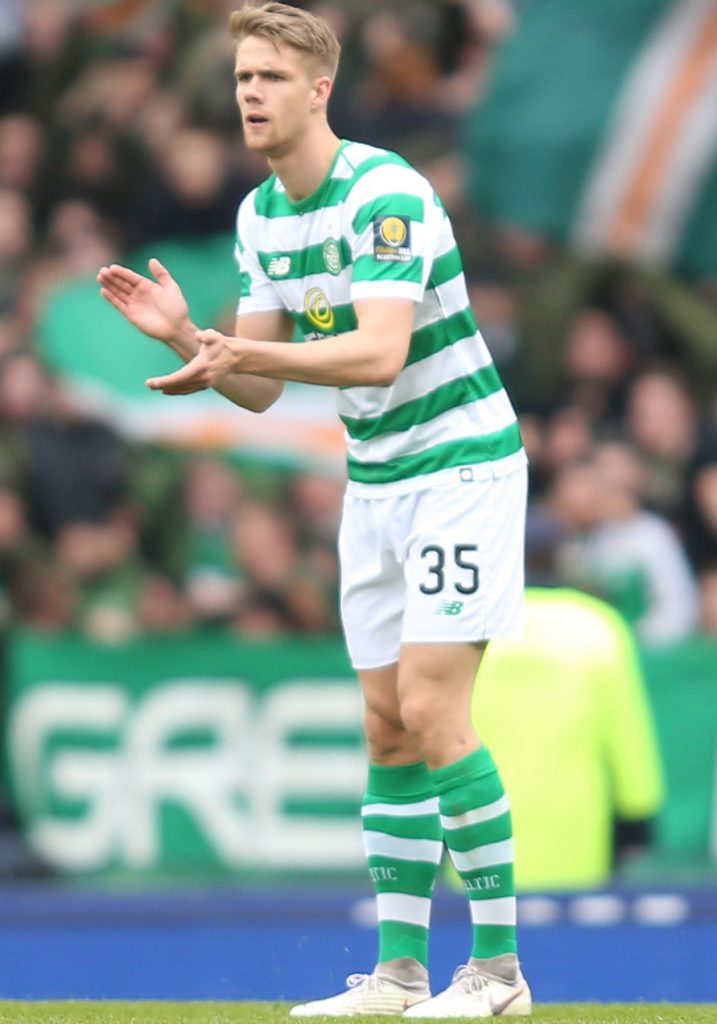 A BIG HAND…Kristoffer Ajer has been outstanding this year.

Ajer, speaking in the Daily Record, paid tribute to his colleagues and said: “I was really delighted for Jozo, the way he works every single day at Lennoxtown on the pitch and in the gym. He’s a top professional and someone I’ve learned a lot from.

“To see him score the winner in the 67th minute, wearing number five, was just incredible.

“The way Jozo’s performing now tells you everything you need to know. He’s a top-class centre-half. He’s still young, but is already extremely experienced and has played a lot of games.

“He’s a great leader for us back there and our partnership’s working well.

“We’ve not conceded many goals in 2019 and we’re happy with that. We’ve been defending well and, when we’ve needed him, Bainy’s been fantastic, as well.

“I think we’ve got a lot of centre-halves in the squad and every week there’s great competition for a place in the team.

“That’s one of our strengths, we have to perform every single week otherwise someone else will come in.

“Jozo and I have performed really well in recent weeks. However, we know that at Celtic, you’re never better than your last game and we have to continue to perform.

“At the moment, we’re at least performing well. You can never know what might happen, so you have to be extremely focused and we immediately work towards the next game at Aberdeen.”