A TEARFUL Jozo Simunovic insists there was something special in the air when he headed the winning goal as a perfect tribute to Celtic legend Billy McNeill, who passed away on Monday.

With remarkable timing, just seven seconds beyond the 67th-minute mark, the current Hoops No.5 rose high to thump a right-wing cross from Callum McGregor low past Kilmarnock keeper Daniel Bachmann for the only goal of a dramatic tussle at Parkhead this afternoon.

Simunovic sought out McNeill’s widow Liz and the McNeill family afterwards to present them with the shirt he wore today. 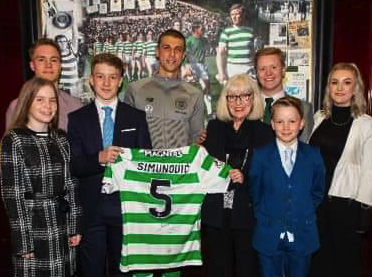 PUT YOUR SHIRT ON IT…Jozo Simunovic presents the McNeill family with his matchwinning jersey.

The 24-year-old Hoops centre-half, who had scored just two goals in his previous four years, marked the occasion with an effort that pushed the champions 12 points ahead at the top of the Premiership on their way to an eighth successive crown.

It was the fairytale day for the club as they gathered together to honour the club legend who lifted the European Cup in 1967.

“It’s an amazing feeling, an amazing guy, a big guy for the club, for the history of Celtic and I’m just very proud.

“Some people will say it’s lucky, but somebody sees everything and especially on this day, remembered for Billy, the feeling is amazing.

“I couldn’t have imagined the scenes when we came here before the game, so many people outside, his family, as well.”

Neil Lennon will see his team clinch the title tomorrow if Steven Gerrard’s team fail to beat Aberdeen at Ibrox.

The Dons have already beaten the Liverpool legend’s outfit three times in Glasgow this season – in the Scottish Cup (2-0), the League Cup (1-0) and the Premiership (1-0).