CELTIC will be hoping their French Connection continues to bring success at Ibrox this afternoon.

Christopher Jullien, bought from Toulouse for £7million in summer, is standing by the make his debut in the Glasgow derby.

The central defender will be delighted to make the same sort of impact of his fellow-countrymen have enjoyed against the Govan outfit.

On September 10, 2016, Moussa Dembele claimed a hat-trick when he took his bow in the fixture as the Hoops triumphed 5-1 at Parkhead. He scored four more goals against the Ibrox outfit, including the League Cup semi-final clincher a month after his trio. 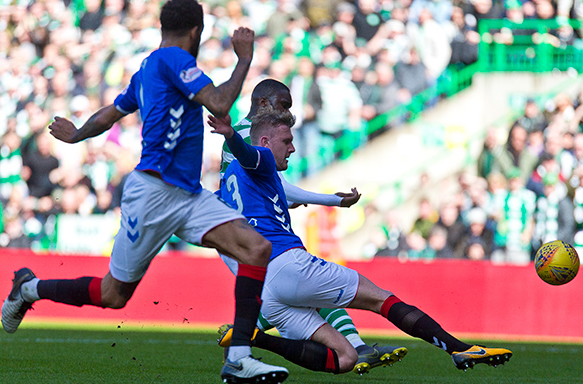 FRENCH FANCY…Odsonne Edouard slams in the opener in the 2-1 win in March.

Odsonne Edouard, the club’s record £10million buy from Paris Saint-Germain, came off the subs’ bench to hit the third goal in his side’s 3-2 victory at Ibrox on March 11 2018.

He followed that up with a double in the 5-1 win a month later and his countryman Olivier Ntcham clinched the points in 1-0 success in the east end of Glasgow in September last year.

Edouard produced a magnificent solo goal in March when he latched onto a volleyed pass from James Forrest to rampage through the back-tracking rearguard before thumping the opening strike beyond Allan McGregor.

He repaid the compliment to his Hoops team-mate when he set up the later winner in the 2-1 triumph that nudged the champions closer to their eighth successive title.

* DON’T miss the unbeatable match report from Newco Rangers v Celtic this afternoon – only in your champion CQN.