CHRISTOPHER JULLIEN told matchwinner Odsonne Edouard he should have had “five or six” goals after Celtic’s hard-fought 2-1 victory over Aberdeen at Parkhead yesterday.

The champions had TWENTY-EIGHT efforts at goal – with 11 on target – but were still drawing 1-1 with the Dons until the French talisman struck in the 66th minute for the goal that places the Hoops five points ahead at the Premiership pinnacle.

Edouard netted his 16th goal of the campaign, but passed up some other chances which were either saved by Joe Lewis or missed the target.

Defender Jullien, who notched his fourth strike of the campaign with the seventh-minute opener, revealed he reassured his compatriot his goal would come.

The £7million centre-back, speaking to the Herald, admitted: “I said to him at half-time: ‘Don’t worry, man, you’re going to score’.

“We know what a threat he is and if he keeps having chances it is going to come. 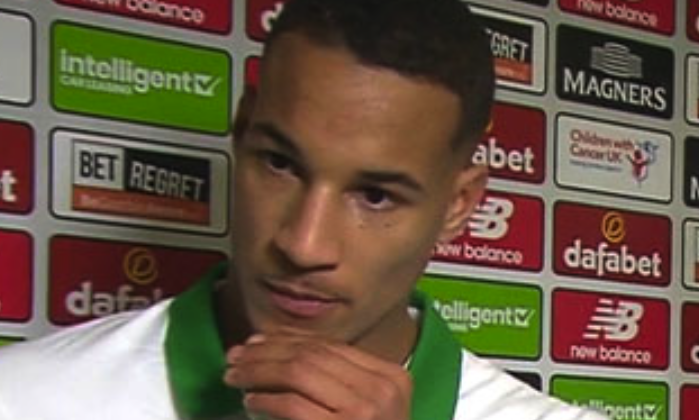 WISE WORDS…Christopher Jullien chats after the win over Aberdeen.

“Odsonne is calm and he is going to score a goal. I told him at the end he should probably have had five or six. But he knows his strengths and we really trust in him.

“He is one of the best strikers I have played with in the final 10 metres. To finish like that after all the chances he missed, to keep that strength of mind, shows how good he is for us.”

Amazingly, the Pittodrie outfit managed to get a first-half equaliser with their only attempt on target when Sam Cosgrove headed a Niall McGinn free-kick high past the helpless Fraser Forster.

However, shortly after Edouad’s winner, the Dons hitman took a rush of blood to the head with a wayward challenge on Kristoffer Ajer that brought an instant red card from referee Euan Anderson.

Leigh Griffiths replaced the French star late in the second-half as Neil Lennon took no risks with the Boxing Day game against St Mirren in Paisley coming up and also the visit of Steven Gerrard’s Ibrox outfit a week today before the winter break.