Celtic Quick News on News Now
You are at:Home»Match Report»JUST MAGNIFICENT CELTIC! 420 MILLION REASONS TO BE PROUD OF OUR BHOYS!
By CQN Magazine on 28th September 2016 Match Report

BRENDAN RODGERS and his courageous Celtic players deserved to take a bow at the end of a breathtaking Champions League encounter at Parkhead tonight.

Three times they led their opponents only to be pulled back on each occasion. But it was not an evening to rue a missed opportunity.

Instead, it was a confrontation where the Hoops can hold their heads high after answering the critics who wondered if they should even be on the same pitch as their billionaire opponents.

This, however, was not a night to check bank balances. It was a night for bravery, commitment and motivation. Celtic boss Rodgers set out his team magnificently in his battle of wits with Pep Guardiola.

His players chased everything down, hunted in packs and were swift to see openings and attempt to exploit them. The fans, absolutely outstanding from start to finish, kicked every ball on another memorable game under the lights in the east end of Glasgow.

And what a start we got when Moussa Dembele scored in the third minute to roars that practically lifted the roof off the stand.

All credit must go to James Forrest and the accuracy of Scott Sinclair at a left-wing free-kick. The former City player drilled a sublime ball to the right beyond a bemused defence as the winger timed his run to perfection. 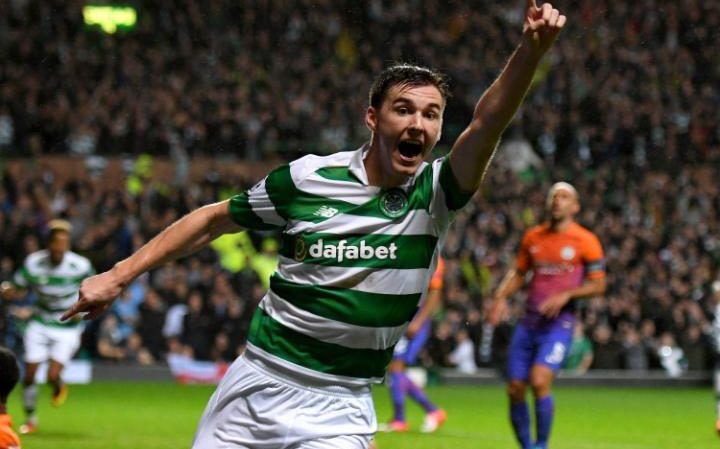 Forrest touched it across for Erik Sviatchechnko to dive full-length in an effort to divert a header beyond Claudio Bravo.

The Dane’s effort carried on to Dembele who showed lightning-swift reflexes to chest the ball over the line. City claimed offside, but Italian referee Nikola Rizzoli was have none of it as he pointed to the centre spot.

Remarkably, Celtic had another opportunity three minutes later to double their advantage. Sinclair created chaos again with another deadly free-kick delivery and the ball was knocked down for Kolo Toure to flash an attempt at goal. Bravo, though, was quick to see the danger and threw himself to his left to push the ball for a corner-kick.

In the eighth minute, Sinclair showed some mesmerising trickery on the left as he came in to set up Tom Rogic. Unfortunately, the Aussie took an extra touch when a first-time effort was required and the City defence hastily booted the ball to safety.

And three minutes later, unbelievably, it was all-square. The Hoops defence failed to deal properly with a ball across from the right and it eventually fell to the feet of Aleksandar Kolarov about 25 yards out. He failed to make a proper connection, but his mishit effort fell perfectly for Fernandinho who tamed the ball and stroked it past Craig Gordon at his left hand side.

In the 20th minute, though, the Celtic support was celebrating again when Rodgers’ men scored a second goal after a superb sweeping movement.

Nir Bitton started it with a nutmeg on Fernandinho and he sent Rogic on his way towards the danger zone. The midfielder released the ball at the perfect time for the rampaging Kieran Tierney and the left-back fired the ball at goal.

His effort took a nick off the studs of Sterling as it flummoxed Bravo. It may go down as an own goal, but that didn’t matter to Tierney and his mates as they took off on mass celebrations. 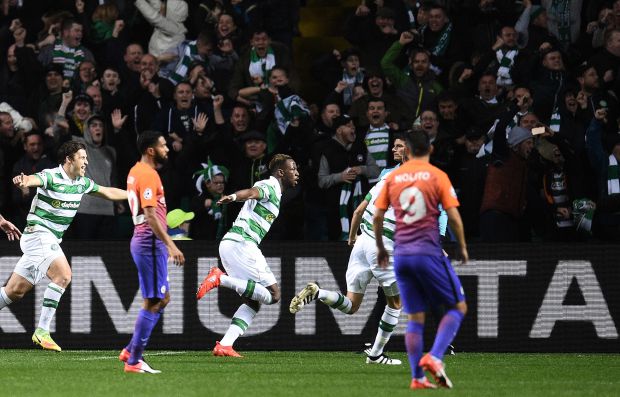 Astoundingly, City levelled eight minutes later. Dembele put skipper Scott Brown in trouble with a bad pass inside that was snapped up by David Silva. He played a quick one-two with Sergio Aguero before releasing Sterling, racing through the middle.

Sviatchenko was slow to react as Sterling cutely turned inside Tierney onto his right foot and, with Gordon also sold a dummy, he swivelled to roll the ball into the unprotected net.

Both sides – and the fans – deserved some respite at the break, but within 72 seconds of the restart, Celtic were ahead again. And once again, it was Dembele on the scoresheet.

Bitton sent Tierney clear on the wing and the left-back swung in an inviting cross. Kolarov was cumbersome as he tried to clear, the ball fell to the French Under-21 international striker and he turned to hit a right-foot effort beyond the static and bamboozled Bravo.

Rod Stewart led the Hoops choir as it gave it pelters, but there was a moment of anxiety in the 50th minute when Gordon was alert to get down and hold a dangerous low drive from Nolito.

Two minutes later, Gordon showed his class again as he swooped to his left to push away a free-kick from Ilkay Gundogan that was sneaking in at the post.

But he had no answer a minute afterwards when Guradiola’s men netted a third goal to draw level once more in an astonishing tie.

Sviatchenko was guilty of giving away possession and the ball was worked into the path of Aguero. Gordon made a superb full-length save to his right to push away the Argentinian superstar’s close-range effort, but, unfortunately, the ball fell straight to the unmarkeD Nolito who whacked it home.

Rodgers pulled off the tiring Rogic in the 57th minute and introduced Stuart Armstrong and Guardiola made a defensive change when he put on centre-half John Stones for Gael Clichy, who had been given a hard time by Forrest.

Patrick Roberts went on for Forrest and Leigh Griffiths replaced Bitton as the Hoops went flat out for the three points.

But City almost stole it at the end when Gundogan had a shot deflected by Sviatchenko, but Gordon reacted in an instant to push the ball over the bar.

It would have been a travesty if the visitors had stolen a triumph in the fading moments.

This was the night where Celtic proved they deserve to be among the elite of Europe. And Brendan Rodgers deserves a massive round of applause for masterminding a truly stupendous turnaround in the team’s fortunes.

That’s one point on the board – let’s hope there are a few more to follow with back-to-back games with Borussia Monchengladbach coming up!