KARAMOKO DEMBELE sent an emotional message to Celtic fans after sealing a four-year deal with French side Stade Brest, as CQN reported yesterday.

The 19-year-old winger, at one stage tipped as a wonder Bhoy prospect, left the Hoops without making a solitary start in his 10 appearances, scoring one goal in a 4-0 win over St Johnstone at Parkhead in May last year.

Now it’s a new beginning for the London-born, Glasgow-raised forward as he prepares for the fresh challenge of Ligue 1 with his new club.

GOODBYE GRIN…Karamoko Dembele holds the Scottish Cup at the end of the treble treble campaign in 2018/19.

However, Dembele took time to reflect as he took to his Instagram page to say:

“After 13 years at Celtic my time at the club has come to an end. I’d like to thank the fans and the people that helped me through this journey. Although not everything went according to plan…the challenges I faced over the past 2 years was not foreseen however with faith and the support of my family I knew it would come to pass. Greater things to come!”

He signed off with: “Lots of love.”

The exciting touchline raider made his debut for the Hoops when Neil Lennon sent him on to replace on-loan Oli Burke at the start of the second-half of the last league game of the season against Hearts at Parkhead in May 2019. 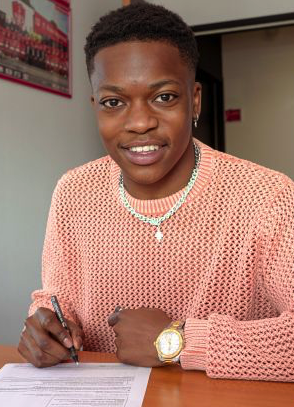 Dembele made a quickfire impression as the champions won 2-1 with a double strike from Mikey Johnston.

The teenager kept his place in the squad, but was an unused substitute when Odsonne Edouard netted two in the identical scoreline against the same opposition in the Scottish Cup Final at Hampden a week later on the iconic date of May 25.

The French international’s goals completed the phenomenal treble treble and Dembele collected his first winner’s medal at the end of a historic campaign.

Now, though, his concentration will be on showing what he can deliver in another country.