Celtic Quick News on News Now
You are at:Home»Latest News»KAYAL v HOOPER, LOOVENS AND WALLACE
By CQN Magazine on 13th May 2016 Latest News

BERAM KAYAL is out on his own in the battle of the former Celts in Brighton’s Championship play-off first leg against Sheffield Wednesday at Hillsborough tonight.
On Sunday evening, the Brighton held their annual awards ceremony at the American Express Community Stadium, with midfielder Beram Kayal picking up the hotly-contested Player of the Season accolade. The former Celtic midfielder picked up 41% of the supporters votes in a closely contested contest.
Just along the English south coast, as we reported yesterday, another ex-Celt also picked up his club’s Player of the year awards. Virgil van Dijk has enjoyed an excellent debut season in English football and was a comprehensive winner of Southampton’s Player of the Year Poll. 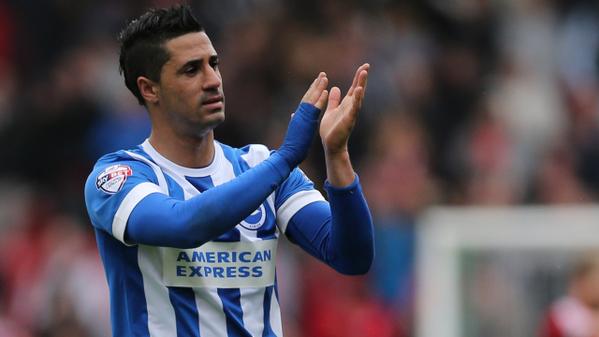 Tonight the Israeli midfielder is up against ex-Hoops stars Gary Hooper, Glenn Loovens and Ross Wallace in the fight for a place in the money-spinning Premier League.
Aiden McGeady, on loan from Everton, has failed to win a regular top team place at the Yorkshire outfit since his move in January. The best the Republic of Ireland international winger can hope for tonight is a place on the subs’ bench.
Kayal, who was sold to Brighton by Ronny Deila in January last year for a small fee, said: “Obviously, this is a very important game for the club.
“Last season it was all about staying in the Championship, but that has changed this time. Now it has been all about promotion and this club deserves success.”
However, the former Celtic trio of Hooper, Loovens and Wallace will present a formidable barrier for Kayal and Chris Hughton’s side this evening.
Wednesday’s Portuguese gaffer Carlos Carvalhal will welcome back his first team regulars for the game.
He rested a host of players for last week’s game against Wolves and the ex-Celts will come back along with Scotland international midfielder Barry Bannan.
The second leg is at the Falmer Stadium on Monday night which looks like being a 31,000 sell-out.