CELTIC back-up keeper Conor Hazard has answered an SOS from Championship side  Dundee.

The Northern Ireland international – No.4 in the pecking order at the Hoops behind Fraser Forester, Craig Gordon and Scott Bain – was called in by Dens Park boss James McPake in an emergency loan deal.

Hazard will go straight into the Tayside squad for Friday night’s game against Ayr United at Somerset Park.

Regular Dens No.1 Jack Hamilton has been struck down by appendicitis and the club only have youngsters Calum Ferrie and Harrison Sharp on standy-by. 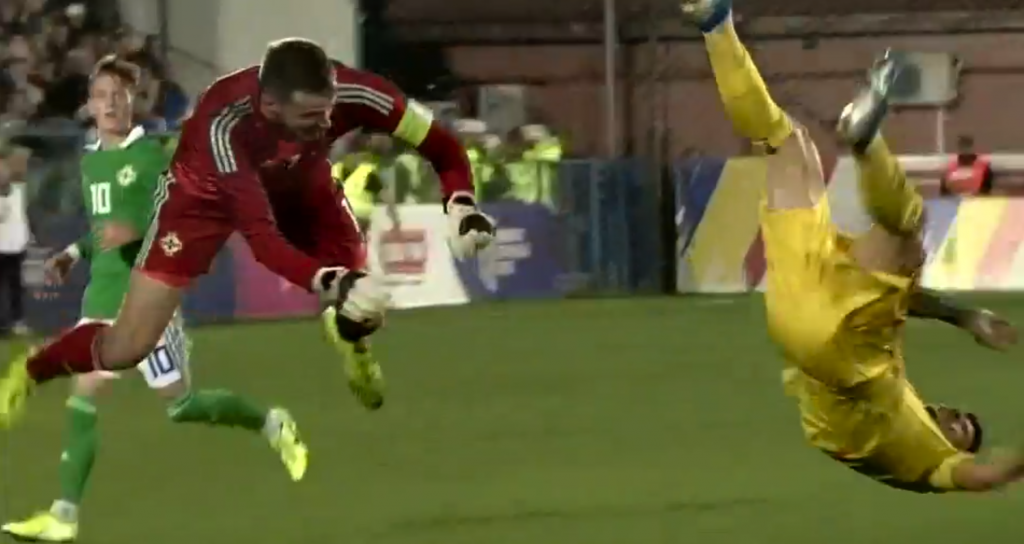 FALL GUY…Conor Hazard involved in the collision that saw him red-carded in Romania.

Hazard spent time on temporary deals with Falkirk and Partick Thistle in the past two seasons.

McPake, speaking to the Daily Record, said: “We have had to act quickly and I’m delighted that we have been able to get someone of Conor’s quality in.

“He is a player who has played in this league over the past two seasons and also has experience of playing at international level.”

Hazard hit the headlines during the international break when he was red-carded in his nation’s 3-0 defeat in Romania in the the European Under-21 Championships.

It was goalless when he was banished in the 38th minute following a spectacular collision with an opponent outside the box.