Celtic Quick News on News Now
You are at:Home»Lions & Legends»‘KEEPING IN PARADISE’ – MEET A LISBON LION TOMORROW!
By CQN Magazine on 24th October 2015 Lions & Legends
LISBON LION John Fallon will always be the subject of one of the all-time bizarre sporting questions: Who won a European Cup medal with Celtic in 1967 and never touched the ball?
Fallon was back-up keeper to Ronnie Simpson throughout the historic run and, of course, the veteran shotstopper – known as ‘Faither’ to his team-mates – performed in every minute of every game through the opening rounds against Zurich and Nantes, to the quarter-final against Vojvodina Novi Sad, the semis against Dukla Prague and, of course, the Final against Inter Milan in Lisbon when the Hoops became the first British club to conquer Europe. 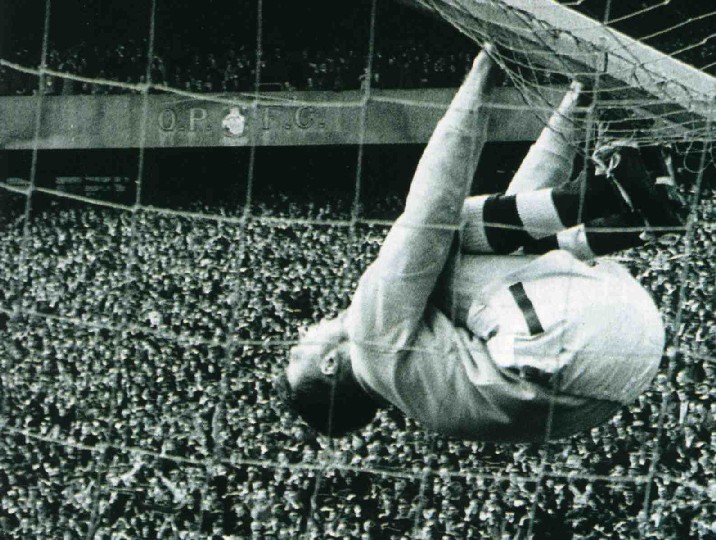 And the unassuming Fallon sat in the dug-outs in Scotland, Switzerland, France, Yugoslavia, Czechoslovakia and Portugal throughout the footballing trip of a lifetime, only too ready to play his part if called upon in an emergency.
It has often been said that Stein had a great distrust of the last line of defence. Billy McNeill reasoned: “You can only believe Big Jock had one or two moments of horror during his playing career as a centre-half. And, of course, the keeper would always get the blame!”
But the flame-haired Fallon, who joined the Parkhead side from Junior outfit Fauldhouse United in December 1958, must have done enough to impress the manager to ensure he consistently had a first team squad place at the club for seven years during that part of Stein’s reign. That, in itself, is a ringing endorsement of the goalie’s ability.
Jock, of course, introduced a flood of keepers to the Hoops over the years as he looked for a long-term replacement for Simpson. Evan Williams, Ally Hunter, Denis Connaghan and Peter Latchford were among the many introduced to life at the Glasgow giants.
Fallon remained longer than most, though, which makes it hugely surprising that he never got the nod to represent his country. This unsung hero did get one call-up to the international squad in the early sixties after he had replaced the eccentric Frank Haffey as the Hoops’ No.1 in 1963.
Haffey, forever remembered for losing nine goals to England in the infamous 9-3 rout at Wembley in 1961, was eventually sold to Swindon Town and Fallon settled into the first team position.
Ironically, Jock Stein sold Ronnie Simpson to Celtic in 1964 while he was manager of Hibs, but it was his ex-Easter Road reserve who took over as the main man at Parkhead after Fallon had played in the breakthrough 3-2 Scottish Cup Final success over Dunfermline in 1965.
Now 75, Fallon can rightly look back with pride at his achievements, especially when you consider he was pitted against the phenomenon that was Ronnie Simpson.
Arguably, his best game for the club came shortly after the Lisbon triumph when Celtic took on Real Madrid in a sold-out Bernabeu Stadium in the Testimonial Game for one of the Spanish side’s  greatest players Alfredo di Stefano.
A goal from Bobby Lennox gave the newly-crowned European masters a 1-0 triumph, but no-one should ever forget the heroics of a marvellous club servant throughout the 90 minutes.
Lisbon Lion John Fallon, will be signing copies of his excellent new book, “Keeping In Paradise”, at the Celtic Supporters’ Club on London Road on Sunday from 12:30. There’s live entertainment also to get you in the mood for the game. The book is also available from the Celtic Superstore and all Celtic stores.
Click Here for Comments >
Share. Twitter Facebook Google+ Pinterest LinkedIn Tumblr Email
Previous ArticleINS & OUTS
Next Article McINNES; MIND THE GAP