JOHN KENNEDY has called on his players to be more ruthless when they attempt to stop the rot against Steven Gerrard’s side at Ibrox on Sunday.

The Hoops have lost three and drawn one of the previous four derbies this season and the High Noon shoot-out in Govan will be their last chance of success in the fixture.

Remarkably, the Hoops have managed only one goal in six hours of football in the outings, a flying header from Mohamed Elyounoussi in the 1-1 Premiership stalemate at Parkhead last month. Odsonne Edouard would have joined him, but fluffed a feeble penalty-kick in the 2-0 Scottish Cup exit earlier this month.

Curiously, two other Celtic players have been on target in those matches – Callum McGregor and Jonjoe Kenny – but, unfortunately, their efforts landed in their own net in the 1-0 loss in Govan in January and the reverse in the national competition.

The other confrontation in October saw Neil Lennon’s side pushed aside in one of the team’s worst performances of the campaign when two goals from Connor Goldson gave Gerrard’s men a 2-0 win. 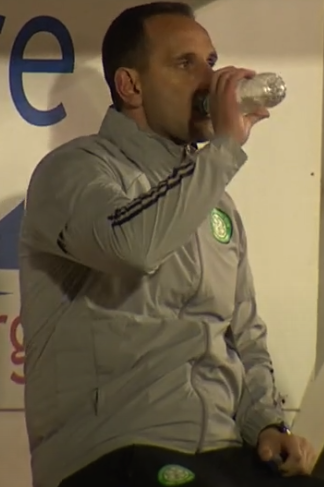 SHOWING SOME BOTTLE…John Kennedy takes a swig while watching the 1-1 draw at Aberdeen last week.

Kennedy, who has been in charge since Lennon’s departure in February, is demanding his players rediscover their killer touch this time around.

The caretaker boss said: “You’re always judged against your biggest rivals and we’ve not been good enough in the games this season.

“We’ve not been ruthless in the vital moments and taken our chances to change the dynamic of the game. In the last game, we gave away two goals which put us on the back foot and then we didn’t take the big moments to get back in.

Kennedy, speaking to Celtic TV, continued: “Results can cloud the performance. In the last six or seven games, the performance has been relatively good, but the deciding factor in games is how clinical you can be. When you’re more clinical it breeds a higher level of confidence and you see more flowing football.

HEADS I WIN…Mohamed Elyounoussi bullets in Celtic’s goal in the 1-1 draw last month.

“That’s why we’ve been successful over the years because we know how to win games and when we get three chances we take two of them. That’s where we’ve come off this year we’ve not been quite as clinical and it’s something we have to fix going forward.

“These are the challenges we’ve faced of late, we haven’t been ruthless enough and that changes the whole dynamic. We have to be better in both boxes, not give anything away in our end and be really ruthless at the top end.

“That’s the difference in football between success and a lack of success. It would be nice for the team to show a ruthless streak there like we did against Livingston.”

Kennedy also dismissed talk he was in the frame for the club’s new director of football role. 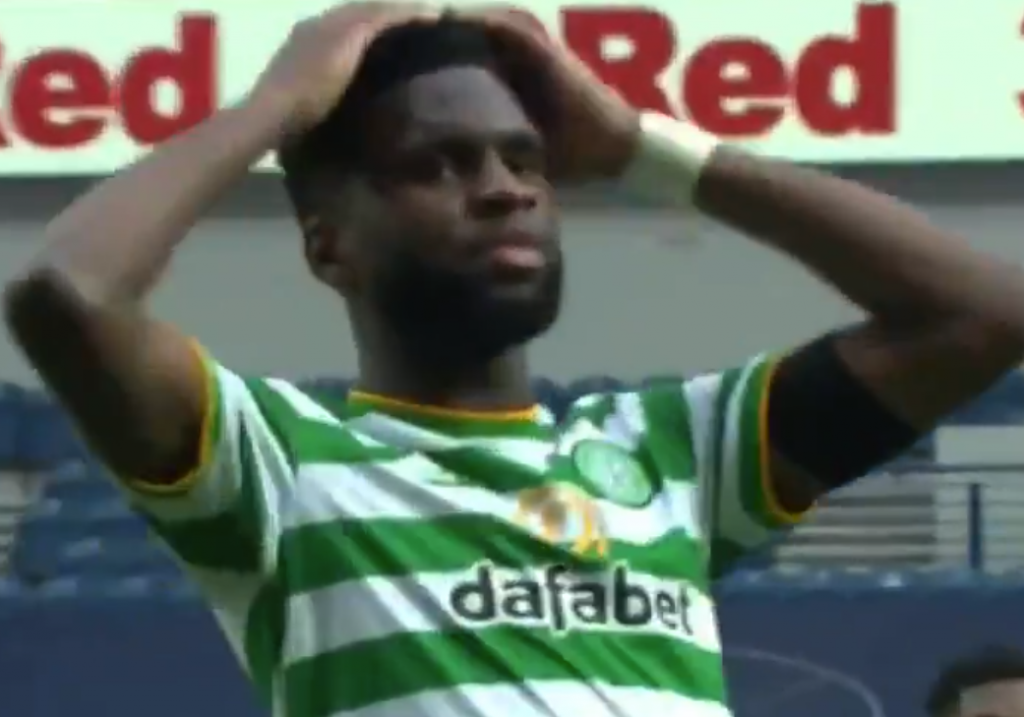 OH NO…Odsonne Edouard can’t hide his anguish after missing a penalty-kick at Ibrox in the Scottish Cup exit.

The 37-year-old former club and country central defender commented: “It has been made up. Someone has obviously had a guess at it. Because there was so much speculation around the manager, behind the scenes and how it might look I think people just start trying to piece things together themselves and putting that out there.

“I have not had any discussions around that role at the club with anyone.”

Asked whether the position would interest him, Kennedy added: “Again, it is not one I have probably considered or spoken about, so it is difficult to really commit to anything.

“I have always been very much about the challenge. When I started out as a youth coach, I always felt progression was important for me in my career.

“I have never been in a massive rush to jump from being a youth coach to manage at the highest level possible straight away.

“At the end of the season, I have to sit down and consider what my options are and what is the right thing for me to do alongside what is available.”