Celtic Quick News on News Now
You are at:Home»CQN Bookstore»KENNY OF THE CELTIC – REVIEWED BY DAVID POTTER
By CQN Magazine on 4th December 2016 CQN Bookstore

Stephen Murray is emerging as one of the better Celtic historians, especially as far as the strange decade of the 1970s are concerned. His Ten Men Won The League was first-rate, and he has now followed this up with Kenny of the Celtic, an account of Kenny Dalglish in his years with Celtic.

It is not the easiest of subjects, for Kenny still causes distress to us. His transfer in August 1977 more or less gifted Rangers the treble in 1978, and in a European sense, we have still not really recovered from the trauma of him being allowed to go and not being replaced. Jock Stein himself never really regained his credibility after that. 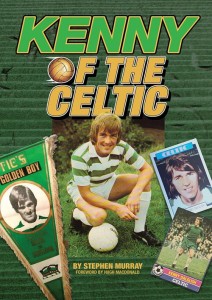 But the pleasant side is the early 70s, and Stephen with his extensive quotations from The Celtic View in particular, reminds us of the great days of Dalglish with his fine goals, his great distribution and his essential love of playing the game from the time he bent down to tie his lace before sinking a penalty at Ibrox until that tragic day of August 1977 when big Jock said “Good luck, you wee bugger” as he departed Celtic Park.

The author writes in an engaging quasi-autobiographical style recalling for example the time that Harold Wilson, ex Labour Prime Minister, was serenaded in 1973 by Celtic fans in Edinburgh after Celtic had won the 8th League in a row, and how the Celtic fans celebrated the 1974 Scottish Cup final with “When the Celts Go Marching In”.

Less pleasant matters are also dealt with – Dalglish’s despicable attempt to get away in 1975 when Stein was in hospital after his road accident, some dreadful Cup finals at Hampden like Rangers in 1973, Aberdeen in the League Cup final of 1976/77 or the game against Dundee on the unplayable pitch in  December 1973. He also does not “sanctify” Kenny (as some supporters do), and is quite prepared to give examples of how the support could, on occasion, turn on him – simply because they always expected that he could do better. I personally recall one awful defeat at Tannadice Park where the word “poseur” was frequently heard in the abuse delivered by supporters.

The one omission, perhaps, is Kenny’s caretaker-managership of the club in 2000 which did at least yield a Scottish League Cup. It might have been an idea to deal with that episode in the context of his unwise association with John Barnes.

It is however a fine book, and well worth buying from CQN at £14.99. There are some pictures that I have never seen before, like the one opposite page 57 which looks like some strange kind of Celtic dance, when all they are doing is celebrating a goal in the game that won the League in 1973 at Easter Road!

But, oh, how the name Kenny Dalglish still hurts!

KENNY  OF  THE  CELTIC by Stephen Murray is published by CQN Books with a cover price of £14.99.

Kenny of the Celtic is available now from www.cqnbookstore.com, from Celtic stores and from Waterstones.