The 43-year-old former Australia star is ready to become part of the Hoops jigsaw and will accept the challenge after being out of work since departing National League outfit Barnet last year after just four months in charge.

Postecoglou has decided to add to his coaching set-up after inheriting assistants John Kennedy, Gavin Strachan, Stephen McManus and goalkeeping guru Stevie Woods when he arrived a year ago. 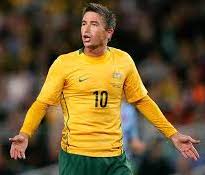 WIZARD OF OZ…Harry Kewell during one of his 58 appearances for Australia.

One-time Liverpool and Leeds United forward Kewell, who has also had stints as boss at Crawley, Notts County and Oldham, will join as a first-team coach.

The 58 times-capped winger just missed out on working alongside Postecoglou for the Australian national side and also Melbourne Victoria.

Kewell, who also spent three years at Turkish giants Galatasaray, is an admitted admirer of the Hoops gaffer and, speaking to Sky Sports in June last year after his Celtic appointment, said: “The one thing Ange told me, and this has stuck with me, is go your own way.

“Once you start listening to other people, you run into trouble.”

Kewell was linked with the Hibs manager’s post in 2019 before Jack Ross was appointed.