Celtic Quick News on News Now
You are at:Home»Match Report»KILMARNOCK 0 CELTIC 1: LAST-GASP BROONY THE HERO – AND THEN HE SEES RED!
By CQN Magazine on 17th February 2019 Match Report

CELTIC moved eight points clear at the top of the Premiership in the most dramatic of circumstances at Rugby Park this afternoon.

A tough, toiling contest was heading for a scoreless stalemate when substitutes Timothy Weah and Vakoun Issouf Bayo combined and defender Aex Bruce managed to divert the ball behind for a corner-kick.

With the clock ticking down and less than a minute of the regulation 90 to go, Callum McGregor raced to take the award on the right.

He swung in to the back post where Dedryck Boyata, who had been a tower of strength throughout, climbed to knock the ball down into space for the inrushing Scott Brown.

The skipper walloped a first-time effort at goal from 12 yards and it took a nick off Bruce on its way past the helpless Daniel Bachmann into the net.

Rugby Park erupted as the ball nestled behind the motionless keeper and the midfielder could not contain his elation and joy as he sped behind the net to celebrate with the cavorting fans.

Alas, that was the last action of Brown in the game as referee Bobby Madden flashed a red card at him as he returned after celebrating.

The powerhouse had been booked in the first-half and he didn’t even argue as he headed straight for the tunnel. 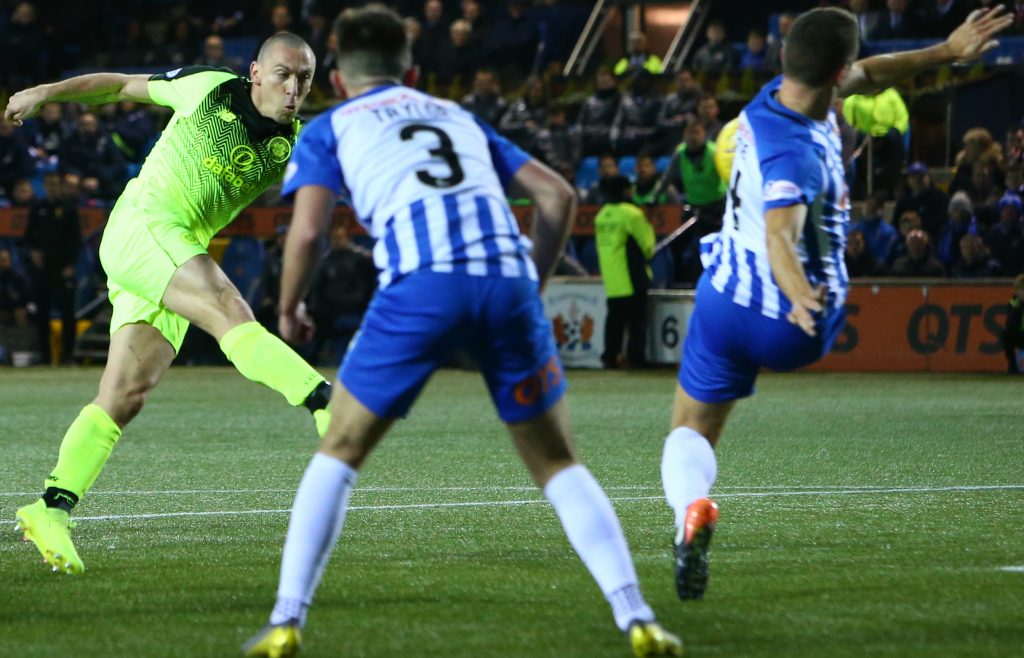 WHAM…Scott Brown first-times the ball towards the Killie goal as Alex Bruce tries to block the effort. 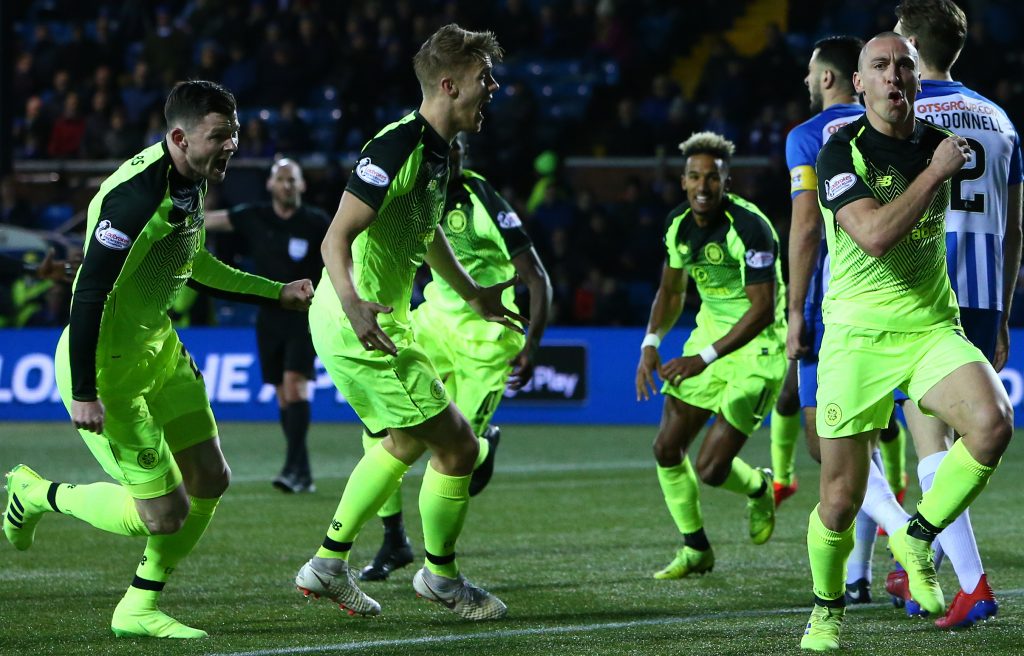 GLORY BHOY…Brown can’t disguise his glee as the ball hits the net as he’s about to be congratulated by his team-mates. 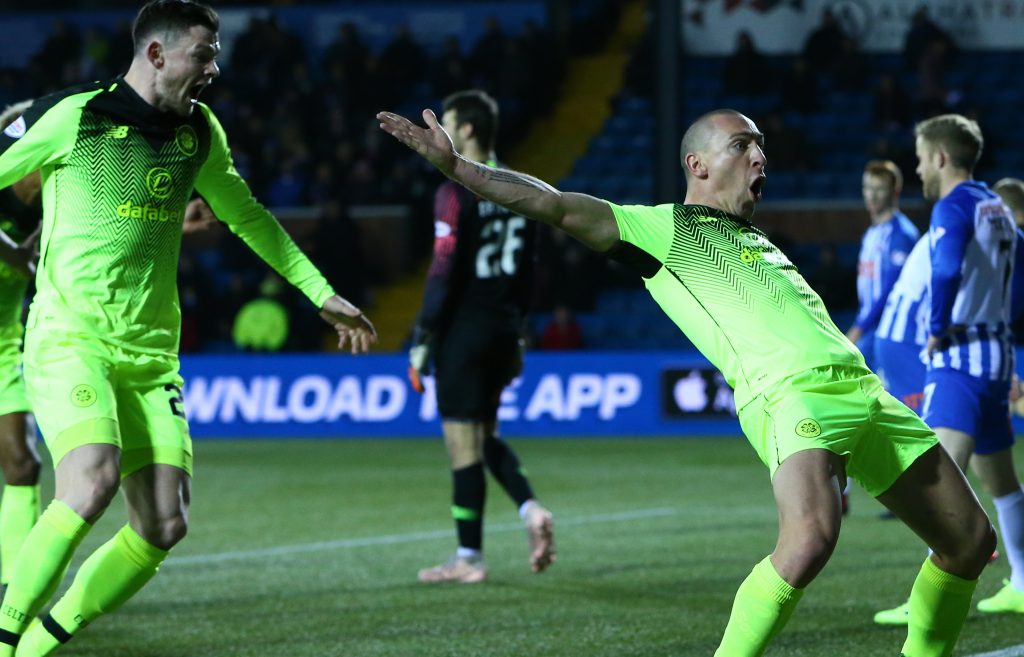 HOW ABOUT THAT, THEN? Oliver Burke prepares to congratulate his skipper. 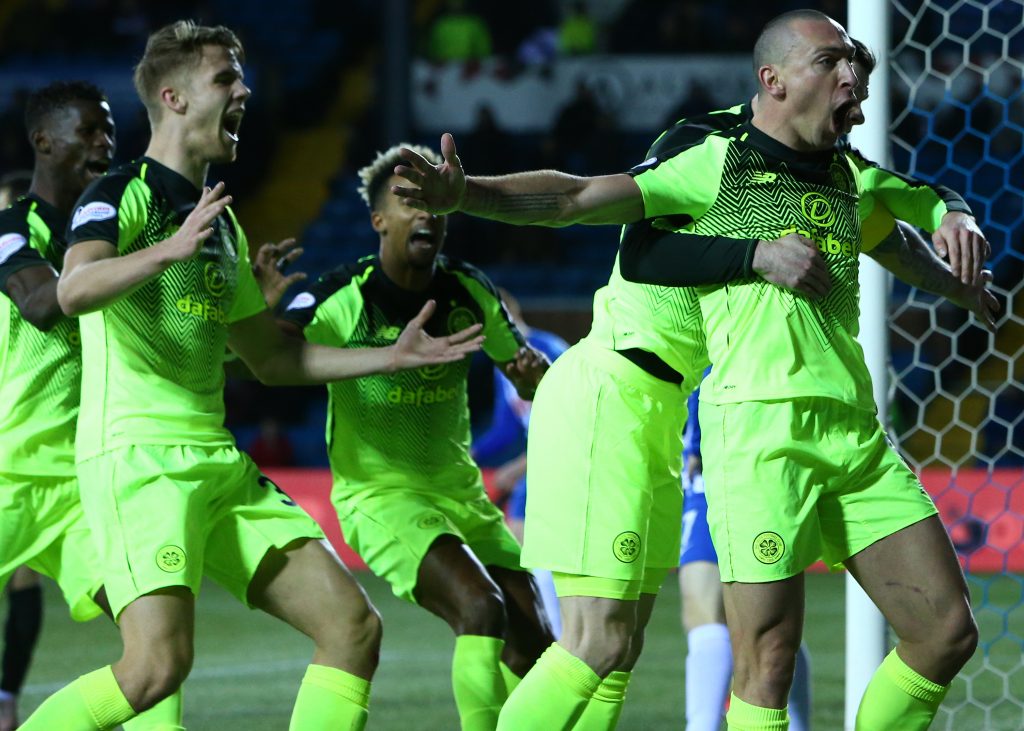 Killie had been reduced to 10 men in the 75th minute when Kirk Broadfoot went in high on Brown and could have no complaints when the match official immediately banished him.

The centre-half should have been booked only moments earlier when he clearly hauled back Odsonne Edouard, but escaped caution.

There was to be no such escape following his assault on the Hoops captain.

Until Brown struck, it looked as though the game was ebbing away from the champions.

Brendan Rodgers made all three substitute changes in the second-half with Oliver Burke, Timothy Weah and Bayo coming on for Edouard, James Forrest and Ryan Christie.

The Highlander, in fact, looked as though he had broken the deadlock eight minutes earlier with a flashing header from a left-wing cross from the hard-working Hayes, but the ball zipped just wide of the keeper’s right-hand post. 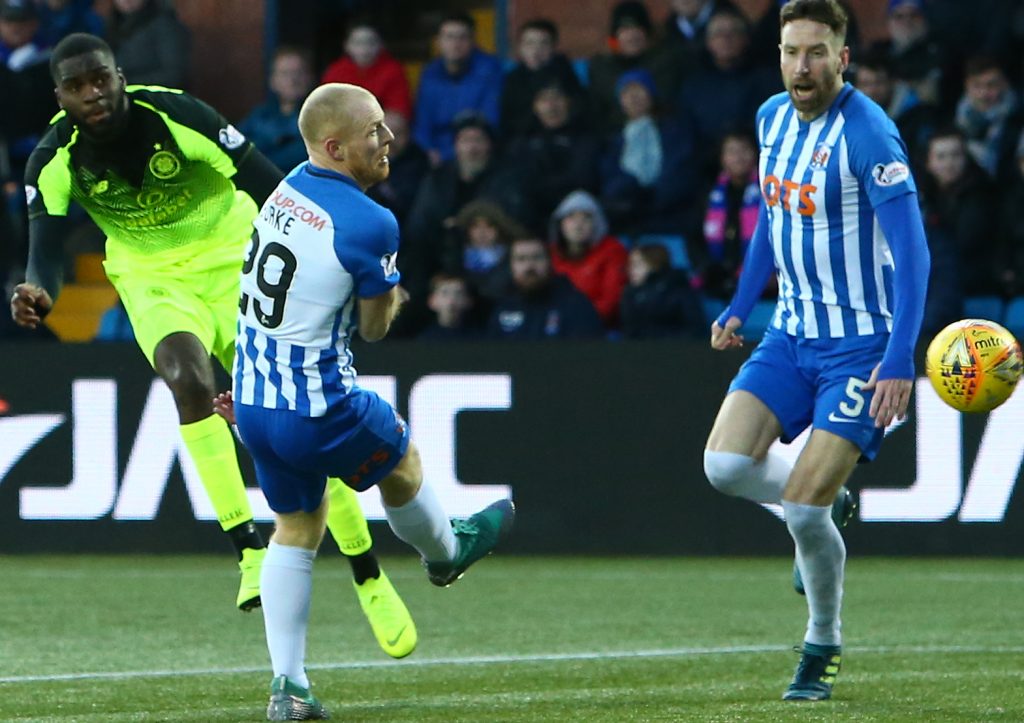 WHOOSH…Odsonne Edouard thumps a shot at goal with Chris Burke and Kirk Broadfoot in attendance.

The Hoops began sprightly with a spring in their step on the dodgy surface, but, worryingly, they faded as the first-half wore on and Killie won a succession of corner-kicks.

In the sixth minute, Scott Bain made a fine sprawling save to his right to touch away a low angled drive from Eamonn Brophy, but the attacker was at least two yards offside before the referee blew.

Two minutes later, Celtic responded with a neat move down the right involving Jeremy Toljan and Forrest and the ball was worked in front of  Edouard.

The £10million Frenchman, starting his first game this year, turned deftly to fire in a low 10-yard shot, but, unfortunately, his aim was just out and his attempt swept wide of the left-hand upright.

The champions were continuing to thread some neat passes around and Hayes looked willing to get involved with a lot of hard running on the left flank.

In the 12th minute, only a fine save from the alert Bachmann defied Edouard the opening goal.

Again, there was a direct move on the right flank with Forrest, Callum McGregor and Christie involved before the ball was shuttled in front of Edouard who snapped a shot at goal.

Bachmann blocked the effort and the ball spun to Forrest who returned it straight into the keeper’s grateful arms. 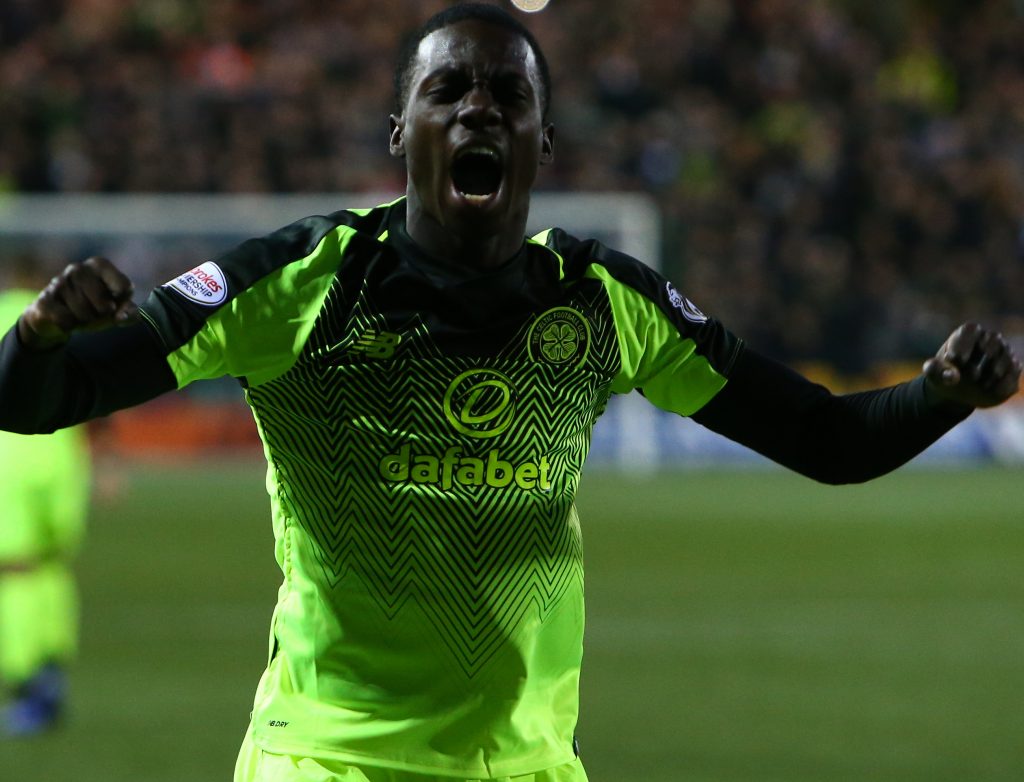 AMERICAN DREAM…Timothy Weah shows his delight at the end.

In the 31st minute, though, there was a hint of danger when a long diagonal ball from Gary Dicker eliminated Hayes and found Chris Burke running into the box.

The winger turned it back to Brophy and only a superb lunging tackle from Dedryck Boyata repelled the menace at the expense of a corner-kick.

The visitors, however, replied shortly afterwards when an Edouard flick set up up McGregor, but the midfielder slipped at the vital moment of contact and the ball sailed harmlessly towards the waiting Bachmann.

Brown then went into ref Madden’s book after an awkward challenge. It was to cost him later in the game.

There could even have been a second goal for the Hoops in the fading moments when Weah turned in an angled drive that struck the outside of the post and ricocheted to safety.

As anticipated, Killie made it tough as their players snapped and snarled throughout the confrontation.

But credit to Celtic who, like the champions they are, refused to accept anything else other than a win.

Now they are only nine successive victories away from their eighth consecutive Premiership crown.

Get that champagne on ice!