LEIGH GRIFFITHS scored his 150th league goal at Rugby Park this afternoon – but there were no celebrations from the Celtic striker or his team-mates on a day to forget.

After leading 1-0 for over an hour, the champions were undone when Chris Burke levelled and Stuart Findlay got the winner with virtually the last touch of the ball.

The second goal came from a “phantom” right-wing corner-kick gifted to the home side by referee Craig Thomson when it looked as though there had been no touch from a Hoops player as a pass from Aaron Tshibola was sent through.

Craig Gordon raced to take the goal-kick only to be astonished by the match official pointing for a set-play for the home side. Adding to the perceived injustice, Burke swung in the kick and Findlay, a former Hoops prospect, got in front of everyone to direct a header down and past the static Gordon.

That finished the game as a contest and left manager Brendan Rodgers and his players clearly frustrated. Killie have now beaten Celtic twice and drawn twice in their past four meetings since Steve Clarke took over as manager.

The visitors had a lot of possession, but precious little penetration. Dedryck Boyata probably had more touches on the ball than any other player on the pitch, but a lot of that was simply moving the ball sideways and not troubling the home outfit. 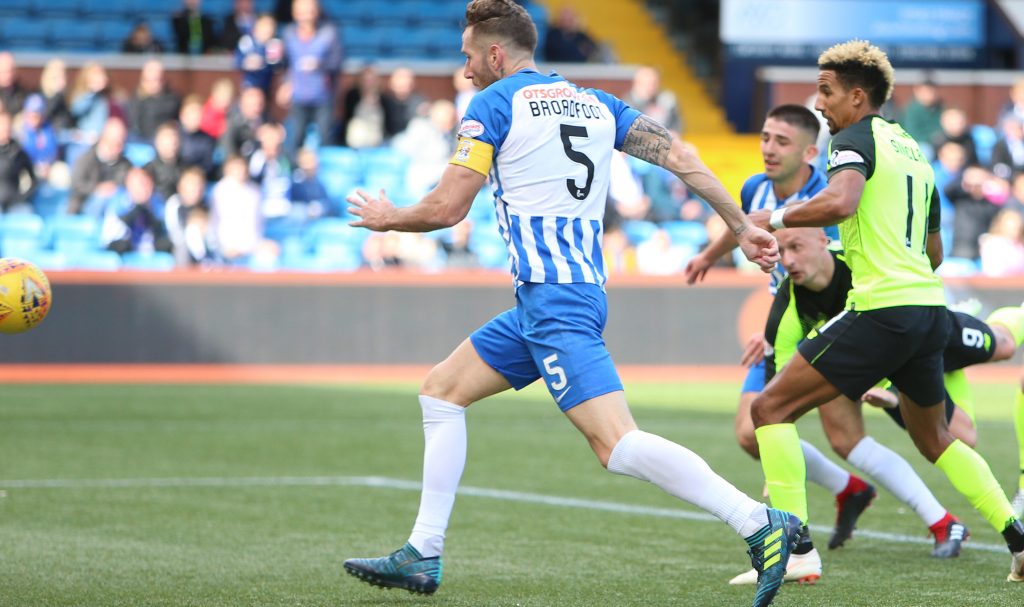 HEAD BHOY…Leigh Griffiths dives to nod in the opener with team-mate Scott Sinclair and opponents Kirk Broadfoot and Greg Taylor getting a close-up view.

Worryingly, too, skipper Scott Brown spent an awful lot of time in his own half when his dynamic presence might have been better deployed further up the pitch if the visitors wanted to kill off the opposition.

So, another miserable away day for Rodgers and his men and you have to go back to 1998 when Celtic failed to win the first three games on their travels in the league. That campaign did not end well for Jozef Venglos or the team.

There was drama even before the kick-off when Filip Benkovic, so impressive against Rosenborg, pulled up in the preparations for the game. The Croatian central defender was hastily replaced by Jack Hendry. He was later diagnosed with an Achilles problem.

The home side were up for the challenge in the opening exchanges on a surface that clearly was not to the liking of the Hoops players. 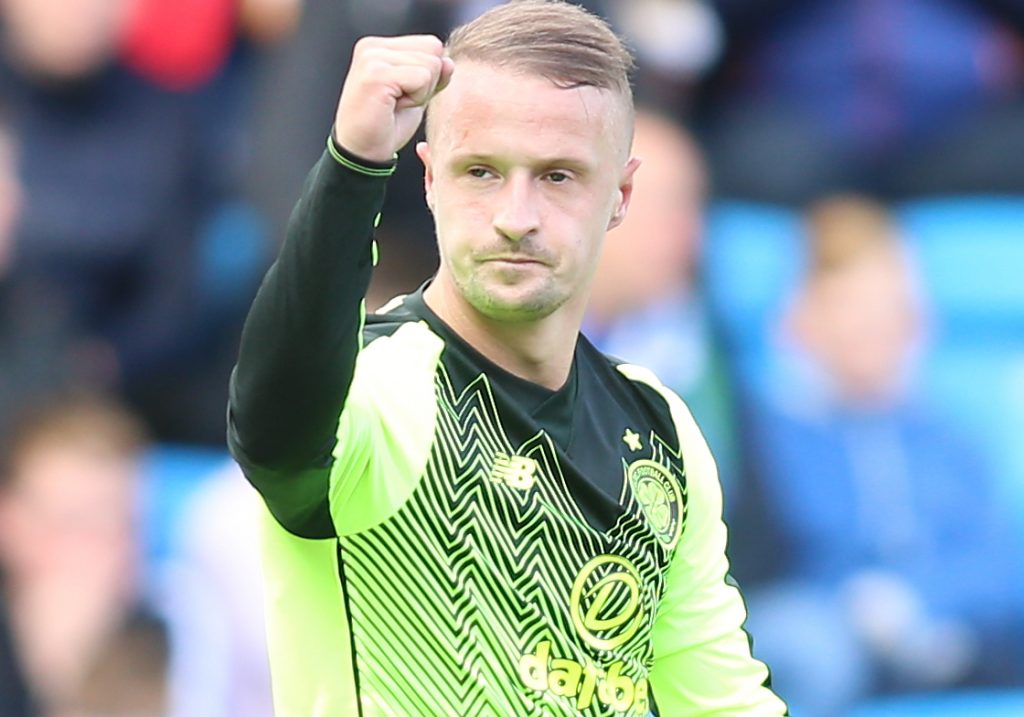 GOAL No.150 in league for Leigh Griffiths who also scored for Livingston, Dundee and Hibs.

Boyata was booked in the fourth minute for clipping the heels of Jordan Jones, a winger who appears to have an inordinate fondness of embracing the plastic Rugby Park pitch.

There was a flash of danger in the 10th minute when Tshibola got up at the back post to make a good connection with a Burke right-wing corner-kick.

It was pushed away at his right-hand post by Gordon and Youssouf Mulumbu, making his first start in place of the banned Olivier Ntcham, completed the clearance by hoofing the ball to safety.

Six minutes later, Boyata should have claimed the breakthrough goal after a cunning right-wing corner-kick from Griffiths was whipped into the penalty box. The central defender misguided an effort over the bar from only four yards to the relief of the home defenders.

In the 22nd minute, Griffiths tried his luck with a long-range free-kick that skidded and bounced across the surface before Jamie MacDonald dived to his left to push the effort for a corner-kick.

But the lively raider had better fortune in the 34th minute when he once again displayed his razor sharp reactions to an opportunity in a packed penalty box.

Mulumbu, putting a lot of energy and endeavour into patrolling the midfield, slipped a pass to Kieran Tierney on the left. The defender fired in a dangerous ball that took a deflection off Kirk Broadfoot and looped towards the far post where Greg Taylor panicked and smacked a wayward clearance off the face of his own crossbar.

That was all Griffiths needed as he launched himself forward to make perfect contact with the rebound to send a header thundering into the net with MacDonald helpless. 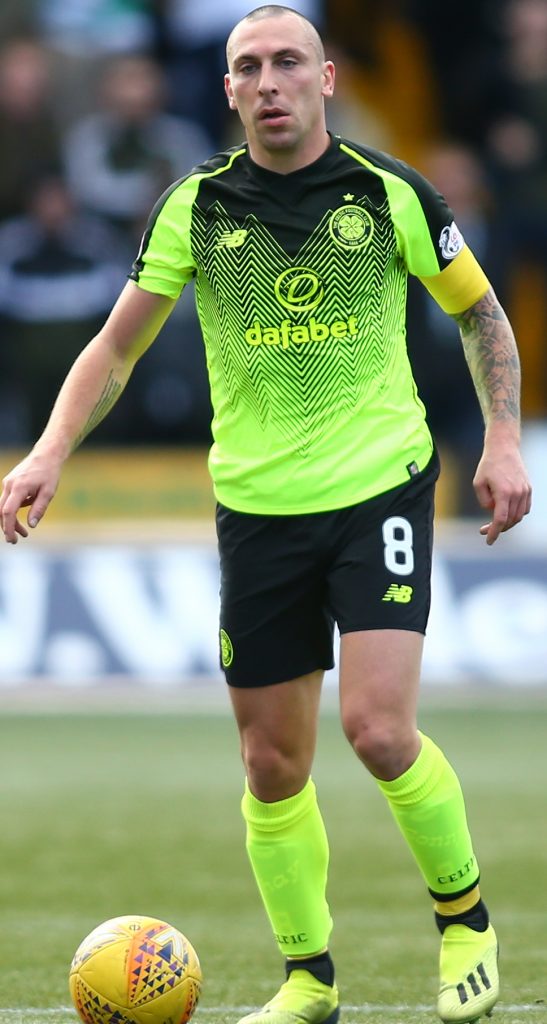 IN AT THE DEEP END…Scott Brown who spent a lot of the game in his own half.

Three minutes later, the Hoops almost doubled their advantage when Boyata headed a Griffiths corner-kick down into the surface and MacDonald scrambled to push the bouncing ball over the crossbar.

The Belgian central defender was creating chaos when he ventured forward for deadball kicks and only the referee, who had a clear view of the incident, can reveal why there was no clear-cut penalty-kick decision when the Celt was wrestled to the ground by the toiling Broadfoot who had both arms around his opponent.

There was a low-key start to the second-half, but it came alive when Mulumbu, who had been granted a “welcoming reception committee” from his old colleagues, was booked alongside Tshibola after a clash on the touchline.

In the 51stminute, there was a poignant moment when both sets of supporters applauded in the memory of the legendary Tommy Burns who gave such unforgettable service to both clubs. It was a heartwarming minute or two before the attention was again attracted to the actions on the pitch.

STOPPAGE-TIME SHOCKER…Stuart Findlay nods the winner beyond Craig Gordon to send the champions spinning to defeat.

In the 64th minute, Killie levelled with a goal from nothing. Following a badly-defended corner-kick, the ball eventually landed at Burke’s feet about 30 yards out and he decided to have a go. His low effort bounced in front of the sprawling Gordon, smacked the inside of his right-hand post and ricocheted into the net.

Rodgers introduced Lewis Morgan, Callum McGregor and Odsonne Edouard,in the second-half, but all to no avail.

Ryan Christie came close after a nice reverse pass from Morgan, but MacDonald got down well to push his low drive wide of the upright.

The Hoops have now taken one point from a possible nine away from home as they go for eight titles in a row. There is no other way of putting it – that is an extremely concerning statistic.

There was very little spark from the champions at Rugby Park – as there had been at Hearts and St Mirren. Six goals scored in six Premiership games tells its own story.

Suddenly, as if someone has thrown a switch, there is little adventure, lack of flair, sparse invention and no cutting edge. It is not a winning combination.

Brendan Rodgers has never lost a League Cup encounter since arriving at Celtic in May 2016. It has got to be hoped that statistic does not alter following the team’s midweek trip to Perth to face a St Johnstone team thrashed at Ibrox at the weekend.

THE END…Celtic players barely have time to kick off after Killie’s second goal. Pics: Geo.