However, the Hoops gaffer is hopeful rest will be enough to clear the persistent problem which has blighted the left-back this season.

Tierney hasn’t featured since the Europa League clash against RB Salzburg at Parkhead last month and missed the Premiership tussles against Hibs, Motherwell, Dundee and Aberdeen.

He was on the substitutes’ bench at Ibrox, but any chances of making an appearance were wrecked when Filip Benkovic and Mikael Lustig took first-half knocks and had to be replaced by Kristoffer Ajer and Anthony Ralston.

That left Rodgers with only one change to make and that was Odsonne Edouard for teenager Mikey Johnston on the hour mark. 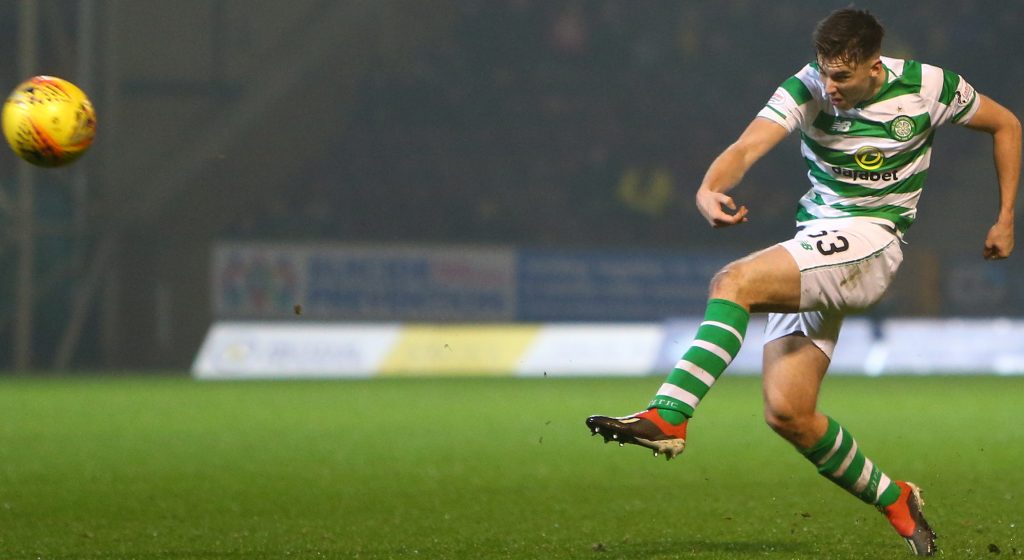 WALLOP…Kieran Tierney thumps in a shot in the 1-1 draw with Motherwell at Fir Park last month. Pic: Geo.

The defender hasn’t trained during the club’s training HQ in Dubai and the Hoops chief will take a closer look at the situation next week.

Asked if Tierney may need an op, the manager said: “I’m not sure. We are just monitoring it and we will see how he is.

“He’s still not training, but he’s out here with the rehab team, so, hopefully, next week we’ll see if there is any reaction when he starts training.”

The champions have struggled to replace Tierney and Emilio Izaguirre, Jonny Hayes and Callum McGregor have been asked to fill in during his enforced absence.

The midfielder, who toiled at Ibrox before the turn of the year, limped out of training on Tuesday and the Irishman explained: “Olivier felt his hamstring tight in training, so he’s going to have a scan.

“Odsonne will join in the training in the latter part of the week.”