The Scotland international defender was forced to miss 10 weeks and 15 games with a persistent pelvic problem.

Tierney made his comeback in the 4-1 win over Motherwell at Parkhead on on Sunday, February 24 – two days before Brendan Rodgers’ swift defection to mid-table Leicester City.

The defender missed training with the Euro 2020 squad yesterday, but he is likely to be in the No.3 position when Alex McLeish’s side kick off the qualifiers against Kazakhstan in Astana.

Reflecting on the injury speculation, KT, speaking to the Sun, said: “I never came out and said that I had a hip injury.

“But, apparently, I was going for a hip operation and it was the same one Andy Murray had.

“It’s funny how things grow arms and legs, with people saying one thing which leads to another.

BY THE LEFT…Kieran Tierney fires a shot at the Dundee goal on Sunday.

“You don’t believe everything you read. The Celtic fans were always with me, asking: ‘When you are you back?’

“They really cared and that makes you feel wanted, as well. It was unfortunate for me that I had 10 weeks out, but that’s football.’

“It was always just rest  I needed. There is nothing you can do for the problem other than rest.

“There is no operation that would have been helpful in any way for it. It was just overused and the 10 weeks did me the world of good. Today I actually feel alright with it. It’s perfect.

“Maybe next season with all those games so tight together again it could feel a bit achy.

“But it’s nothing  likely to affect me in the long-term. Walking around was fine, but I just couldn’t play to my full capacity.

“When you are at Celtic, you need to be able to do that.

“And in the left-back position, as well, you need to be able to get  up and down the pitch for 90 minutes.

“If I can’t do that, then that’s a big chunk of my game missing. You don’t want that.

“There were ways that I could maybe have battled through a game or two. But battling through 10 weeks of pain like that wouldn’t have been good for anyone.” 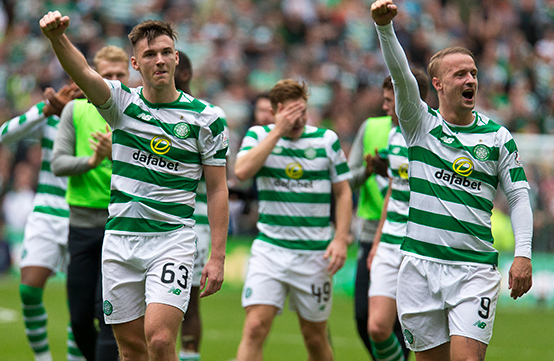 HAPPY DAZE…Kieran Tierney leads the Celtic players as they acknowledge the fans after the win over Steven Gerrard’s team in September.

Tierney, who will also be in line to face San Marino despite the return to the squad by skipper Andy Robertson, added: “Injuries happen, defeats happen, wins happen — anything can happen in football.

“So, you just need to keep everything maintained at the same level and make sure you don’t get too high or too low.

“You need to stay positive throughout everything.”

Tierney will also set his sights on the visit of Steven Gerrard’s Ibrox side on March 31 when the champions have the opportunity to move THIRTEEN points ahead at the top of the Premiership as they zero in on their eighth successive title.

The back-four operator was forced to sit out the 1-0 lapse in Govan in the last game of December before the winter break.

Rodgers was forced to play Callum McGregor in the position and it was a switch that back-fired with the Hoops missing the guile and control of Tierney’s fellow-international in the middle of the park.

It is likely to be a different story in Paradise at the end of the month.