Celtic Quick News on News Now
You are at:Home»Latest News»KT PLANS DADDY OF ALL PARTIES
By CQN Magazine on 15th May 2018 Latest News

KIERAN TIERNEY is hoping to lead the celebrations that will be the daddy of them all at Hampden on Saturday.

Celtic can cement their place in the history books if they defeat Motherwell in the Scottish Cup Final to claim an unprecedented double treble.

And the Scotland international defender he will be able to party with his dad Michael – just like he did at Parkhead on Sunday as the Hoops lifted their seventh successive Premiership crown.

The 20-year-old left-back borrowed the megaphone from the fans to lead the sing-a-long only minutes after the league curtain had come down following the 1-0 loss to Aberdeen.

Tierney was joined by his mum and dad on the pitch and he insisted the family would never take these wonderful occasions for granted.

He said: “These are days I’ll never forget in my life. I can say I grew up dreaming of doing this, but I never thought in my wildest dreams I would have been able to do what I’ve done.

“Growing up, my mum and dad gave up everything for me and sacrificed so much for me. You could see my dad coming on the pitch – he was more hyper than me and that’s saying something!

“We all just can’t believe what’s happened to me in recent years and we’re all so grateful for it.

“At Celtic, you want to win every game and give 100 per cent and on Sunday it wasn’t our day and it didn’t work for us. But the celebrations at the end were about a season overall and not just one game and we celebrated being deserved winners of the league.” 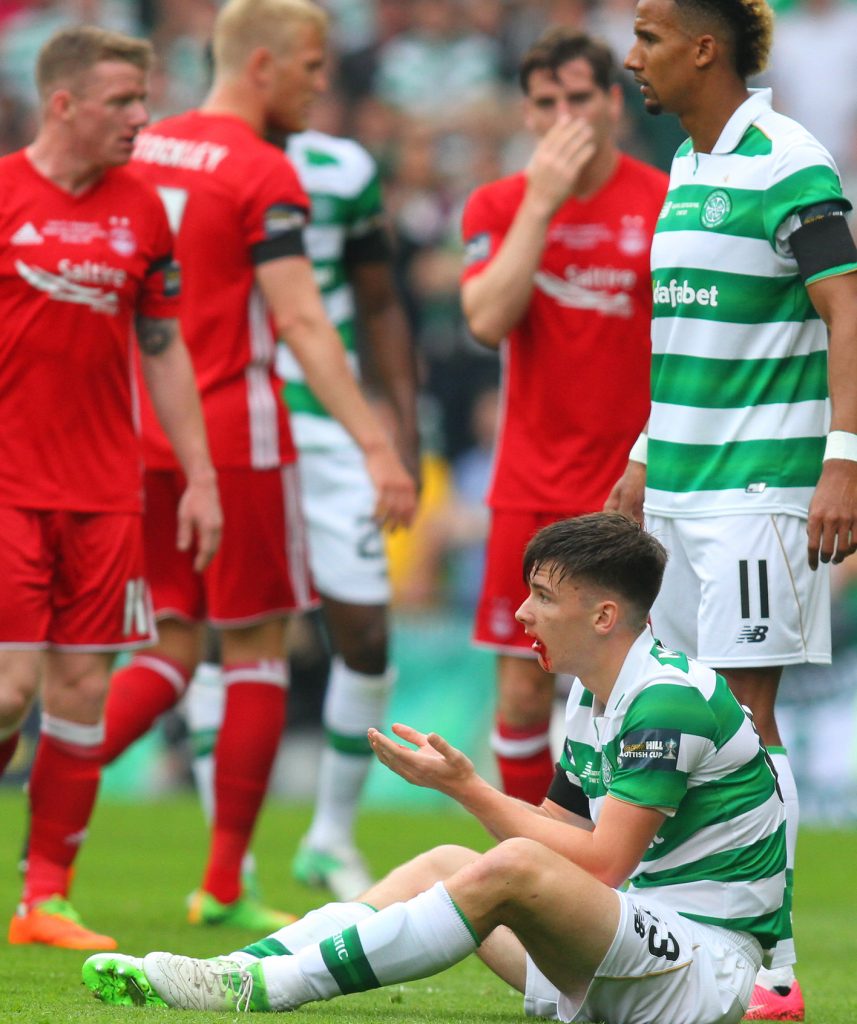 BLOODIED BUT UNBOWED…Kieran Tierney is left groggy on the pitch after being struck on the face.

KT is hoping Saturday’s match at Hampden doesn’t include an impromptu visit to nearby A&E at nearby Victoria Infirmary.

A swinging elbow from Aberdeen striker Jayden Stockley floored the youngster in the first-half and he had to be taken to hospital with a facial injury.

Brendan Rodgers immediately recast his formation and put on Tom Rogic in midfield and pulled back Callum McGregor to cover for his stricken colleague. How ironic, then, that the Aussie should get the winning goal in stoppage time.

Tierney raced through the car park for his memorable moment as he picked up his medal and waved the trophy to the Celtic legions.

He added: “The Cup Final has been talked about a lot, but we’re just focusing on working hard in training and doing our talking on the pitch.

“Everybody knows what’s at stake, no-one has to say it, and we’re just looking forward to the game.”

* Tierney was speaking to The Celtic View, on sale now. 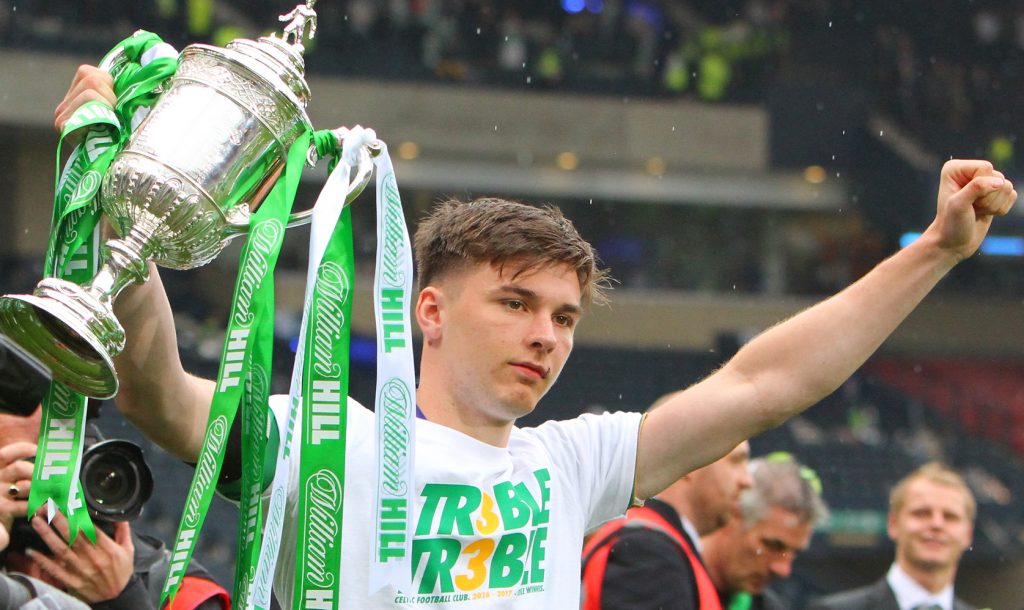 HAMPDEN HAPPY BHOY…no stopping Tierney as he returns to join in the Cup-winning celebrations. Pics: Geo.