KIERAN TIERNEY did make an appearance at Parkhead last night – unfortunately it was AFTER full-time.

Celtic were deprived of the services of the Scotland international defender as they collapsed to a disappointing 2-0 loss against Valencia in the first leg of their Europa League last-32 encounter.

Emilio Izaguirre had a horror show in his place at left-back and it was not a performance the Honduran will reflect on fondly.

He played the Spaniards onside as they took the lead just before the interval and he allowed Ruben Sobino to get in front of him to knock in a left-wing cross for the killer second shortly after the turnaround. 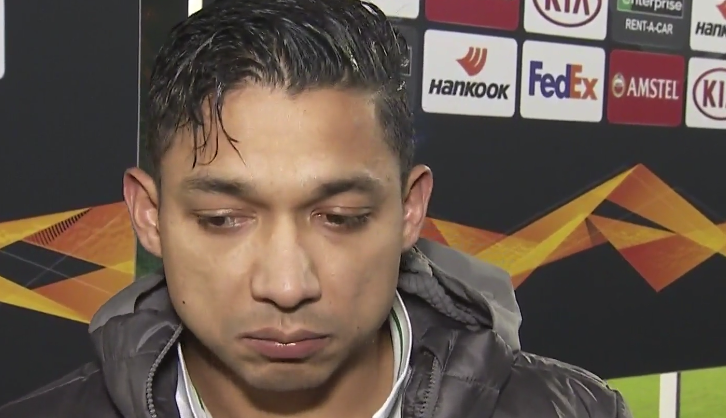 Brendan Rodgers had hoped Tierney would be able to make his first appearance for the Hoops in just over TWO MONTHS and gave him a deadline on the day before the tie.

Unfortunately, the 21-year-old fans’ favourite failed to convince the Irishman he was up to the rigours of a tough test against La Liga opponents.

Izaguirre got the nod ahead of Jonny Hayes and the 32-year-old full-back had an evening to forget.

Tierney came onto the pitch following the final whistle as he continued his rehabilitation following hip problems.

Rodgers has hinted the defender could make his return against the Spaniards in the Mestalla on Thursday.

It is unlikely KT will be risked on the plastic surface against Kilmarnock at Rugby Park on Sunday, so the second leg against Valencia is the player’s more likely comeback date.