KIERAN TIERNEY is well aware of Celtic’s recipe for success – and that did not include a Chinese takeaway following the team’s Betfred League Cup Final triumph over Aberdeen at Hampden on Sunday.

The Hoops defender was forced to have low-key celebrations at home as he prepared for tonight’s Premiership encounter against Motherwell at Fir Park – the Hoops’ fifth consecutive game away from Parkhead.

Tierney said: “In the changing room after the game at Hampden, it was brilliant. The scenes were amazing and will live with me forever.

“But when you go home on the Sunday, you can’t even eat unhealthily.

“I wish it could have been a Chinese! But you have to keep doing the right things because there’s another game coming right away and that’s what you have to do to try and be successful.

“Myself and the family have a small celebration, spend time together and that is what’s important. My family and friends keep me going and spur me on.

“These are the great times and we are in it together.”

Tierney and his team-mates whooped it up on the pitch in front of the cheering supporters and had some impromptu celebrations in the dressing room as they clinched their seventh successive piece of silverware in Brendan Rodgers’ two-and-a-half years at the club. 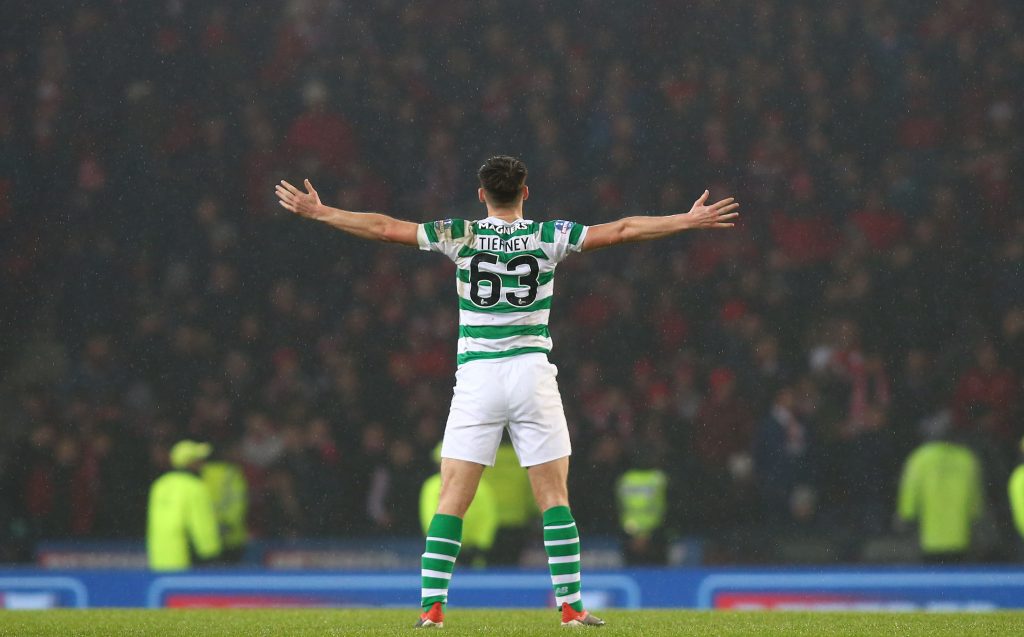 However, only hours earlier the champions, bidding for their eighth successive Premiership crown, dropped off the top of the table following Steven Gerrard’s Ibrox side’s 2-1 win over Hearts at Tynecastle.

The Hoops now have a game in hand as they prepare for this evening’s tussle against Stephen Robinson’s outfit and face another aix league outings before the turn of the year.

Celtic will bring down the football action on 2018 with a trip to Govan on Saturday, December 29.

Scotland international Tierney added: “There was nothing we could do with dropping to second. It was a Cup weekend and we had to miss our game so that we could win that trophy.”

“That was the most important thing on Sunday and now the focus turns to Fir Park and that is a tough game because Motherwell always make it tough.

“They will now be thinking the same way as I’m sure Aberdeen would have been thinking in terms of: ‘Right, Celtic have just come off a hard game, let’s try and make it tough for them’.

“To be honest, that’s probably the way every team is going to be thinking these days.

“That is a crazy situation, but that is what gives us the hunger.

“We know the expectation is there and we don’t want to let anyone down, especially not anyone in our own changing room or the fans.

“We gave the fans a great night in Norway and another one at Hampden and that’s our thank you for the way they support us.”