KIERAN TIERNEY thanked the Arsenal fans after his long-awaited debut in the 5-0 Carabao League Cup triumph over Championship outfit Nottingham Forest at The Emirates last night.

The Scotland international left-back, who left Celtic in a record-breaking £25million switch last month, played for 77 minutes before being withdrawn by boss Unai Emery.

Tierney, with one his boots inscribed ‘Bhoys’, was making his first appearance since playing for the Hoops when they sealed their eighth successive Premiership title with a 3-0 victory over Aberdeen at Pittodrie on May 4.

The 22-year-old sat out the remainder of the campaign and missed the Scottish Cup Final triumph over Hearts three weeks later that sealed the unprecedented treble treble. 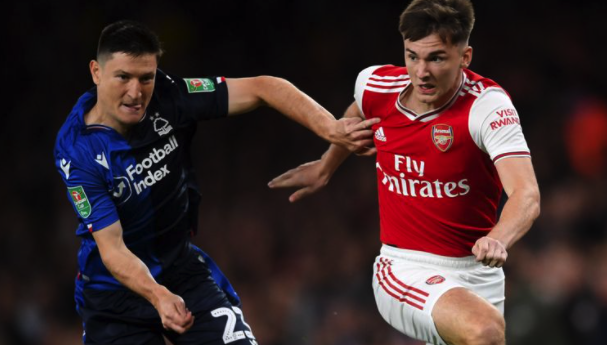 Tierney underwent a double hernia operation in the summer which delayed his first match for the Gunners.

After the game, the defender took to Instagram to say: “Thank you so much for all your support … very grateful.

He is now standing by to make his Premier League bow against Manchester United at Old Trafford on Monday night.