CELTIC top scorer Kyogo Furuhashi is at the centre of a World Cup blow-up.

The Hoops hitman was snubbed by Japanese boss Hajime Moriyasu for a starting place in his line-up for the crucial qualifier Qatar 2022 against Saudi Arabia last night.

Kyogo, who has scored eight goals in 10 starts for Ange Postecoglou’s side since his £4.6million arrival in the summer, spent the first hour on the substitutes’ bench as his nation toiled to take control.

He was pushed on and ordered to play wide left as his country conceded a 71st-minute to Firas Al-Buraikan as his country suffered their second loss in three qualifying games.

They are now struggling to gain automatic qualification for next year’s soccer spectacular after Tom Rogic played for 63 minutes of Australia’s 3-1 home win over Oman to top the section with nine points from three outings and the Saudis just behind on goal difference.

Japanese star Masakiyo Maezono hit out the manager and insisted he was not making most of Kyogo’s qualities. 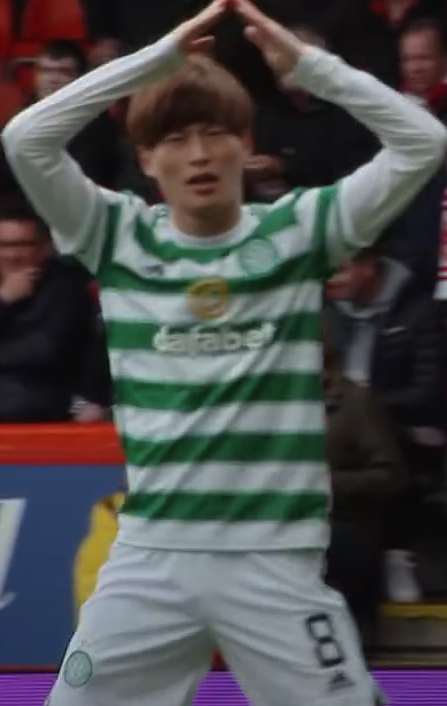 SUNDAY BEST…Kyogo Furuhashi celebrates his eighth goal for Celtic against Aberdeen at the weekend.

He said: “Why did we not start Kyogo Furuhashi? He’s fit enough to start for Celtic, so he should be fit enough for us.

“It was bad enough not playing him, but then when he did come on, he was stuck on the left wing and was unable to have any influence on the game.”

Maezono, in a report in the Daily Record, added: “His manager at Celtic, Ange Postecoglou, has got the best out of him by playing him as a striker and he has scored a lot of goals.

“It makes no sense to not play him in a position where he scores goals.

“The manager needs to start using players in their correct position or else we have no chance of qualifying for the World Cup.”

Kyogo was on target for the Hoops when he opened the scoring in the 2-1 win against Aberdeen at Pittodrie on Sunday in his second comeback game following a five-match lay-off after sustaining a knee injury in his nation’s 1-0 win over China at the start of last month.