Celtic Quick News on News Now
You are at:Home»Latest News»LAMBERT’S PRAISE FOR DANNY GRAHAM
By CQN Magazine on 9th May 2016 Latest News

PAUL LAMBERT, among the many names linked as Ronny Deila’s successor, quit Blackburn Rovers at the weekend – and then urged the club to snap up Danny Graham.
The 30-year-old striker, who is reported to be interesting the Hoops, scored his seventh goal in 18 games in the 3-1 win over Reading.
Graham joined the Ewood Park club on loan from Sunderland in January and will be a free agent in the summer.
Former Celtic and Scotland skipper Lambert ended his six-month reign at the Championship side after triggering a release clause in his two-and-a-half year contract. 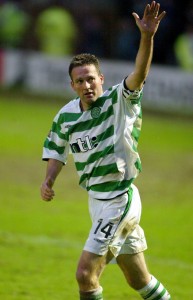 But he believes former Swansea hitman Graham should be persuaded to sign a permanent deal to keep him at the club.
He said: “He’s scored seven goals for us and that’s a big return as he’s only been here for three months.
“My advice to the club would be to try and sign him. No two ways about it.
“But I don’t know what Danny wants to do. He has to be the judge of that.
“He’s been a revelation since he’s been here and he’ll be sought after, no doubt about it.”

Lambert, whose side finished 15th the league. added: “I’m delighted for the team and the way we played against Reading was outstanding.

“In the first-half, it could have been four or five – we were excellent. It’s easy to turn up on the last day of the season and just see it out, but we did great and scored two fantastic goals.

“The first one, from Elliott Bennett, was a brilliant volley and Danny Graham’s was a great goal, too.

“And then Simeon Jackson came on and got his goal. It was great to sign off with a win.”
If Paul Lambert is unveiled as the new Celtic manager next week then if you put two and two together, Danny Graham – who has also been linked with a move to The “Rangers” – could be an early arrival for the re-building as Celtic set out for 6 in a row.
Oh and a better return from cup competition participation, both domestically and in European football.