Celtic Quick News on News Now
You are at:Home»Latest News»LAST CHANCE FOR STOKES
By CQN Magazine on 16th December 2015 Latest News
PROBLEM Bhoy Anthony Stokes will return to Celtic today in the realisation this is the final opportunity to save his Celtic career.
The Republic of Ireland international striker is due back at Lennoxtown this morning with his two-week suspension now expired.Club chiefs and a frustrated Ronny Deila, upset at Stokes’ Twitter rant before the game against Inverness Caley Thistle in the Highland capital earlier this month, banned the player after a succession of issues.He was told to stay away and given a strict ultimatum that he must begin to produce the goods on the park after falling down the frontline pecking order behind Leigh Griffiths, Nadir Ciftci and recent signing Carlton Cole. 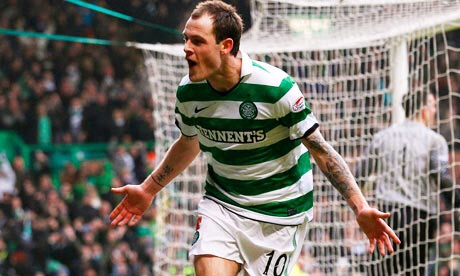 Deila insists the former Hibs and Sunderland frontman could still have a future at Parkhead if he reaches the manager’s requirements.The Hoops boss said: “He has a future here. There are things that need to improve and that’s with all the players, as well. If people are improving, they have a future because he can play football.”If he makes the improvement that we want, everything is possible.”

With next month’s transfer window approaching, the 27-year-old hitman has already been linked with Championship outfits Cardiff City and Preston.

The Welsh side were reported to have been quoted a price in the region of £1million during the August window, but, if Stokes doesn’t come up with the answers, they will realise he could be up for grabs at half the original price.
It’s now down to the player to show he wants to play his part in a successful Celtic side aiming for the domestic treble.
Stokes must also realise this is his last chance to convince everyone he has a career with his boyhood idols.
With next month’s transfer window approaching, the 27-year-old hitman has already been linked with Championship outfits Cardiff City and Preston, and rather than put money on the striker staying in the SPL, I’d spend it on bestbingosite.co.uk.
——————————————————————–

* Get the TOTAL LARSSON absolutely FREE when you order The Winds of Change from CQNBookstore.com today!
The Winds of Change continues the story of managing Celtic after Jock Stein and follows on from Caesar & The Assassin. We pick up the story in 1991 just as Billy McNeill is leaving the ground having been sacked. What happens next illustrates perfectly just how much of a legend Caesar (or Cesar if you prefer!) is.
Seven Celtic managers and one caretaker come and go until May 2005 when Martin O’Neill leaves the club.
So order The Winds of Change today and receive the TOTAL LARSSON DVD for FREE! Offer ends midnight Wednesday.  Order HERE or click on the image below. All orders will be posted by 9am tomorrow morning to arrive pre-Christmas.