PETER LAWWELL has hailed the achievement of Neil Lennon and the Celtic players for achieving their eighth successive title following an emotional fortnight for everyone connected with the club.

In the sad wake of the passing of two Lisbon Lions, greatest-ever captain Billy McNeill and European Cup-winning goalscorer Stevie Chalmers, the champions made certain they honoured the Parkhead legends by being crowned the best club in the country for a historic 50th time.

The chief executive, talking to the Celtic website, said: “Securing our eighth successive title is a fantastic achievement and everyone involved in delivering this for the club deserves huge praise.

“It has been a difficult number of weeks for so many people associated with the club losing such greats in Billy and Stevie and Saturday’s title win was a fitting tribute to these fine men. I am sure they would have been proud of their club making it eight-in-a-row.

“I would like to thank Neil and the players for once again ensuring we are the best team in the country. The commitment and dedication shown by the players again across this season cannot be underestimated. Under pressure again to continue to deliver success and once again win the League by such a healthy margin is a great achievement. 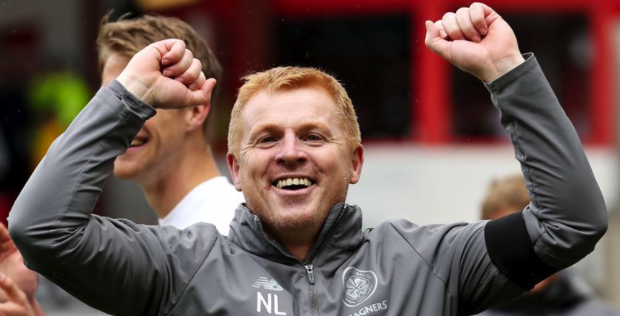 “Winning can never be taken for granted. It comes from real ability, hard work and professionalism, something which our players have in abundance.

“Led by Scott Brown, a fantastic Celtic captain, the players have been phenomenal. Our players should celebrate and enjoy these moments. They gave everything to our cause and delivered when they needed to right across the season.

“I would like to thank Neil for his crucial role in the campaign.  At a difficult time for us, he took on the challenge, winning big games and driving us over the line.

“He knows all about winning with Celtic and deserves real credit, as does John Kennedy who provided great continuity and a significant contribution throughout the season, Damien Duff and, of course, the rest of the backroom staff.

“Brendan, too, played a huge part in our success this season laying the foundations for another title win and we thank him for this great contribution. Throughout his period as Celtic manager, he achieved great things and he deserves our thanks again for being part of eight-in-a-row.

“Most importantly, I would also like to thank our supporters who have once again given us such fantastic backing throughout the season. Everything we do at the club is for our supporters.

“Our objective is always to deliver success and give our fans a club they can be proud of. The club and supporters together, united in our desire to be the best is a powerful force.

“Thank you again. Celebrate and enjoy our eighth title in a row. You deserve it.” 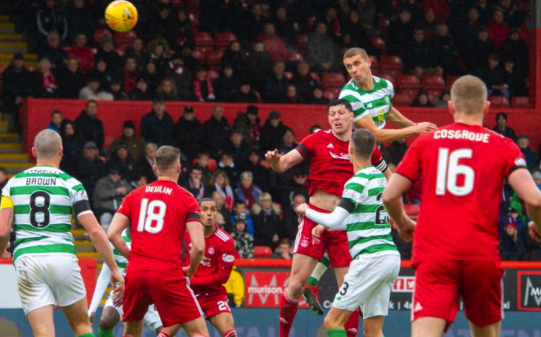 RISE AND SHINE…Jozo Simunovic powers in the second goal against Dons.

Lennon came in on a caretaker basis in February when Rodgers suddenly departed to take over at Leicester City.

The former manager hit the ground running and led the team to a crucial 2-1 victory over Hearts at Tynecastle, a venue at which the team had faltered earlier in the season, and also a 2-0 Scottish Cup quarter-final victory over Hibs at Easter Road only three days later.

The Irishman has been in the dug-out for 11 unbeaten games and got the team over the line on Saturday at Pittodrie with a 3-0 victory over Aberdeen with Mikael Lustig, Jozo Simunovic and Odsonne Edouard on target.

Celtic are now on the brink of an unprecedented treble treble when they face Hearts in the Scottish Cup Final at Hampden on May 25, exactly 52 years to the day when Billy McNeill led the club to its greatest -ever victory when they conquered Europe in the Portuguese capital.