Celtic Quick News on News Now
You are at:Home»Football Matters»‘LAY OFF LAWWELL,’ SAYS DEILA
By CQN Magazine on 24th April 2016 Football Matters
DEPARTING boss Ronny Deila has told Celtic supporters to lay off chief executive Peter Lawwell.
The Norwegian, who will quit at the end of the season, admitted he was stunned at some of the flak that has come the way of the Hoops supremo after 13 years in place.
He said: “Consistency is unbelievably important and he has been successful all the time, so I don’t understand the problem.
“We’ve had trouble getting into the Champions League for the last two years but, again, that can turn around and there’s no reason why we can’t beat a Karagandy or a Malmo or a Legia Warsaw or whatever. We’re more than big enough to do that.“It’s very difficult when everything is a failure when you lose and everything is okay when you win. It’s not normal. 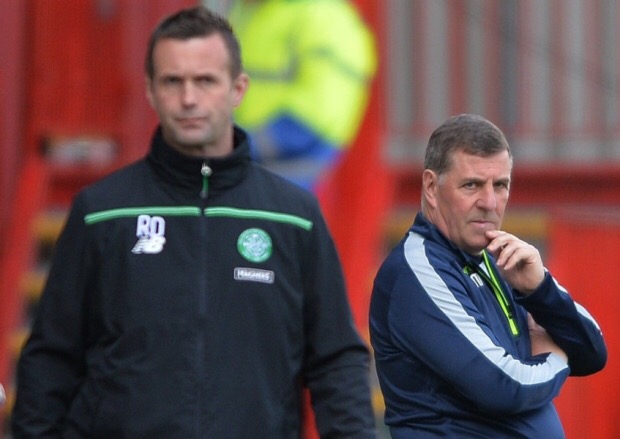 “And that’s something to all the Celtic fans – enjoy winning, because there will come times that we are not doing that.

“It’s been an unbelievable record for trophies. In Peter’s time, I think there have been nine league wins in 13 years and seven or eight times in the Champions League.

“I’ve had a fantastic relationship with Peter. He’s a tough leader. He’s very experienced and fair.

“When he came in here the club was broke. That’s important to remember, with a big, big financial problem.“Now he’s on big boards like the European Club Association because he’s done a fantastic job. He gets offers from other big clubs because they know what he can do.

“What he has meant for the club is huge in my opinion and , of course, you can’t use money you don’t have.”

Delia’s support will be welcome news for Celtic’s Chief Executive who has been under increasing pressure from within the Celtic support in recent times with issues like his role in player recruitment, the strategy of selling the club’s best players every summer to balance the books, only to see the club tumble out of European competition with the subsequent financial hit that involves and of course the fall-out surrounding the Rangers cheating scandal and the complex and numerous issues that has created within Scottish football.