Celtic Quick News on News Now
You are at:Home»In Pictures»LAZIO, LIVI AND A ROLLERCOASTER: WORDS AND PICTURES OF THE SEASON: OCTOBER
By CQN Magazine on 31st March 2020 In Pictures

WINNERS over Lazio and losers at Livingston – the month of October was a real rollercoaster for Celtic and their fans.

There was also a satisfying 2-0 revenge victory over Champions League conquerers Cluj, Ross County were hit for six and Aberdeen were dismissed following a whirlwind four-goal first-half onslaught at Pittodrie while three points were gathered in a routine 2-0 win over stubborn St Mirren at Parkhead.

Neil Lennon’s men kicked off the month with their encouraging victory over Dan Petrescu’s Romanian shock squad who had scored four goals in an extraordinary 4-3 collapse by the home outfit in the east end of Glasgow in August. There was no such flop on this occasion as Odsonne Edouard and on-loan Mohamed Elyounoussi – with his first since his arrival from Southampton – scored the goals for a precious Europa League triumph. 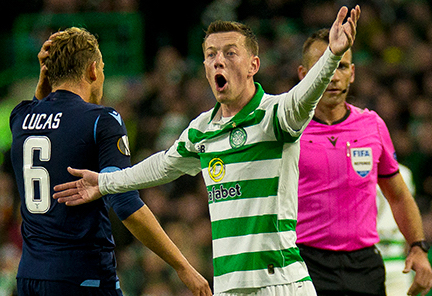 IN WITH A SHOUT…Callum McGregor against Lazio.

Amazingly, though, the wheels unexpectedly came off four days later in West Lothian when the title kings suffered their first Premiership reverse of the campaign when Livi capitalised on Ryan Christie’s 25th-minute red card to win 2-0.

Celtic got back on track with a 6-0 triumph over the visitors from Dingwall before the remarkable 2-1 success over Serie A superstars Lazio at a rocking Parkhead where the Hoops came back from a goal down to level through Christie and gain a dramatic last-gasp triumph with a soaring header from Christopher Jullien. A breathtaking diving save from Fraser Forster in the dying moments denied the Italians an equaliser.

The month came to a halt with two well-merited wins against the Dons and Jim Goodwin’s Paisley outfit.

As ever, CQN‘s top lensmen were there to capture the action. Here is the pick of the pics. 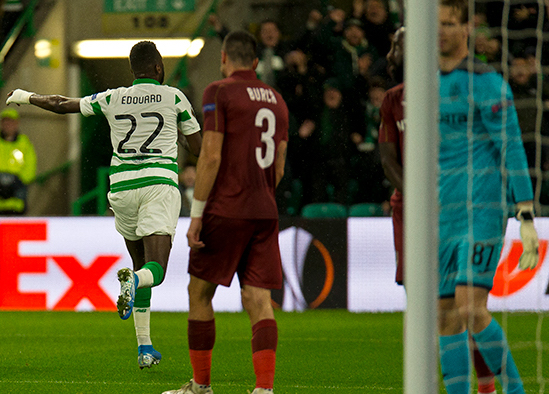 HEAD BHOY…Odsonne Edouard races away to accept the acclaim of the fans after nodding Celtic into the lead against Cluj. 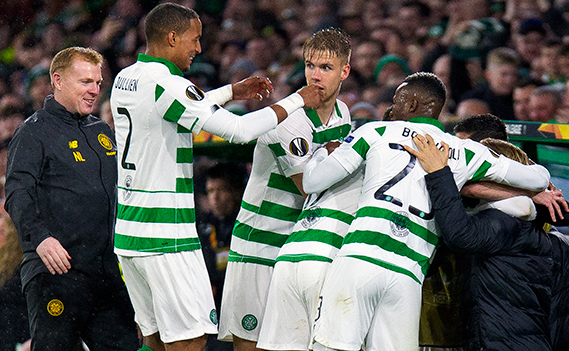 HOOP HOOP HOORAY…a delighted Neil Lennon looks on as Mohamed Elyounoussi is engulfed by team-mates Christopher Jullien, Kristoffer Ajer, Boli Bolingoli and the substitutes after his strike against the Romanians. 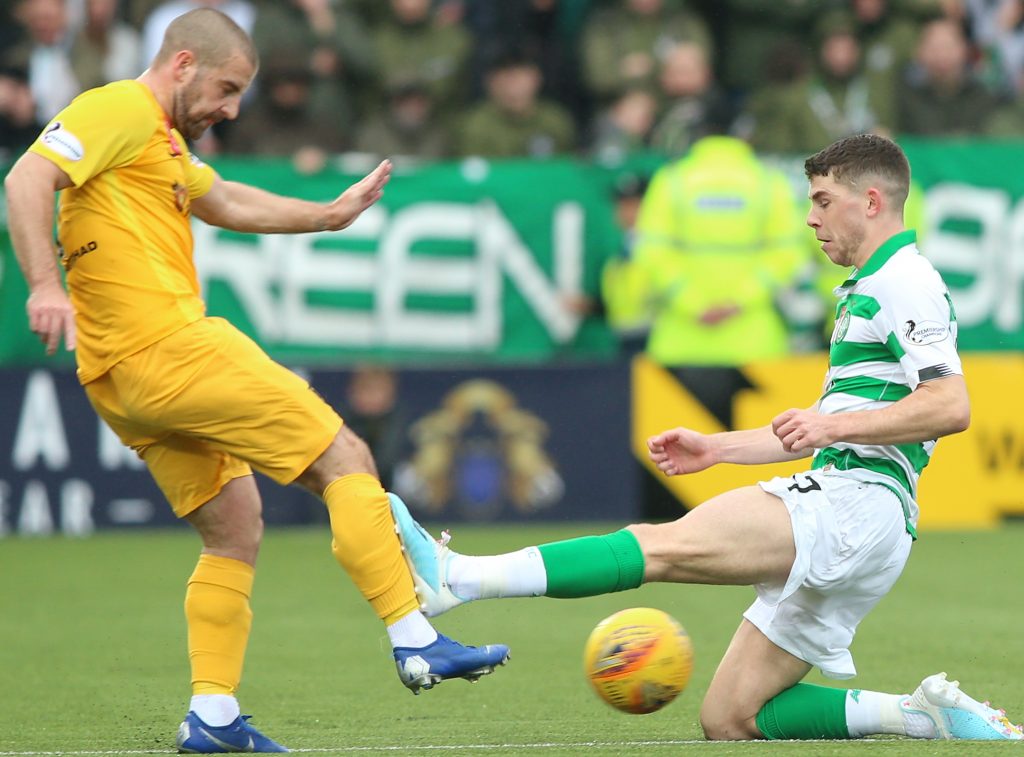 RED MIST…Ryan Christie is over the top in his challenge on Livingston’s Scott Robinson to provoke an instant dismissal in the 2-0 loss. 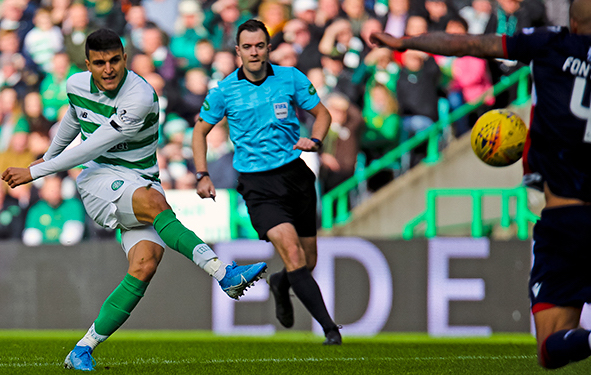 WALLOP…Mohamed Elyounoussi starts the six-goal rout of Ross County with a right-foot effort. 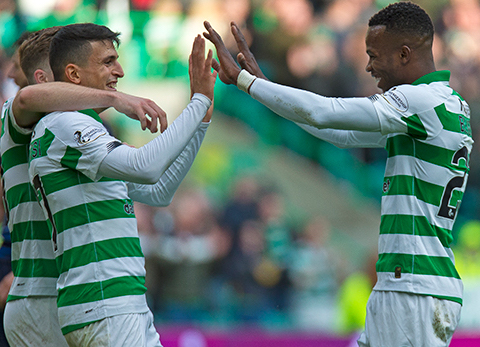 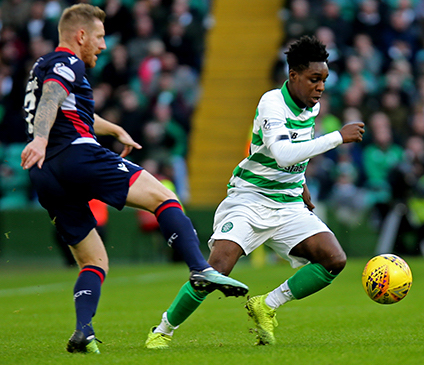 ON THE RUN…impressive newcomer Jeremie Frimong races away from County’s Michael Gardyne. 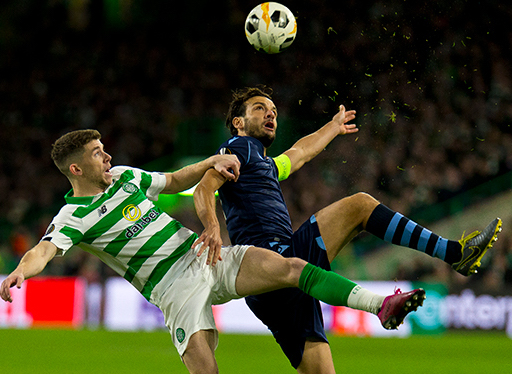 EYES ON THE PRIZE…Ryan Christie is in the thick of it against Lazio. 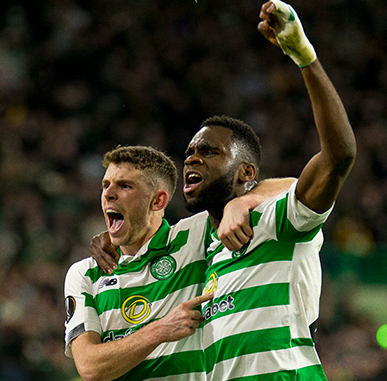 JOY BHOYS…Christie and Odsonne Edouard celebrate the midfielder’s equaliser against the Italians. 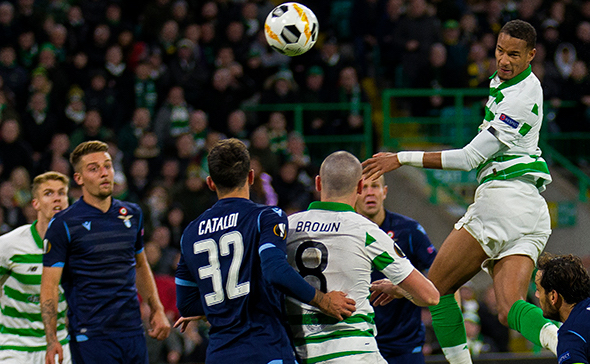 RISE AND SHINE…Christopher Jullien heads in the dramatic late winner against Lazio.

NUMBER ONE…Odsonne Edouard shows some fancy footwork before opening the scoring against Aberdeen at Pittodrie. 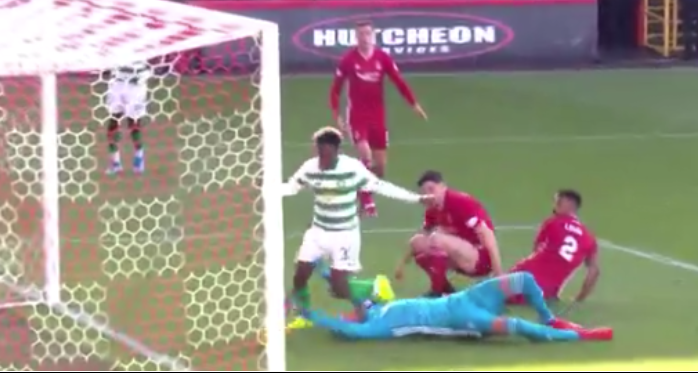 NUMBER TWO…Jeremie Frimpong follows up an attack as he prods home from two yards to notch his first goal for the Hoops. 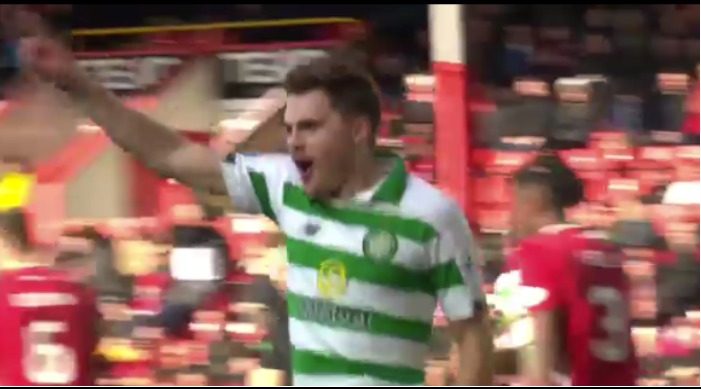 NUMBER THREE…James Forrest celebrates piling the misery on the Dons.

NUMBER FOUR…Mohamed Elyounoussi hits the deck as the ball heads towards the Dons net with keeper Joe Lewis helpless.

TOMORROW: The best in words and pics for November.