CELTIC legend Davie Hay insisted earlier in the season that Odsonne Edouard could prove to be a superior player than Moussa Dembele.

And the former Hoops player and manager backed up his claim after watching the French striker net the winning goal against RB Leipzig in Thursday’s pulsating Europa League Group B encounter at a packed and atmospheric Parkhead.

Hay said: “Odsonne Edouard can go on to be an even bigger player for Celtic than Moussa Dembele was.

“At only 20, Edouard looked every inch a top quality striker against Leipzig.

“I have always thought that he has something about him, but on recent evidence I actually think that he can surpass what Moussa did at Celtic. He can really make a name for himself in Glasgow.

“When he first arrived at the club, I thought that he wasn’t as physically strong as Dembele, but he has really brought that to his game. His power and physique were used to great effect against Leipzig, but he is also faster than Dembele, too.” 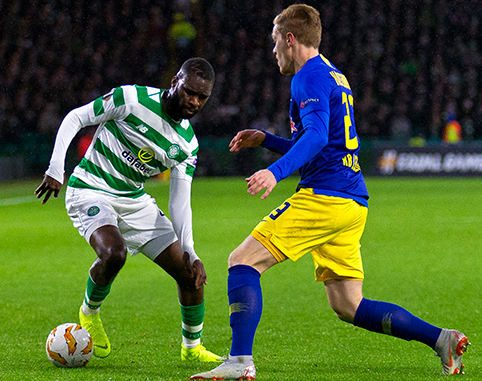 Hay, now a club ambassador, added: “He can be as good as he wants to be. We are not at Christmas yet and already he has scored 12 goals.

“Odsonne will easily break the 20-goal barrier this season assuming there are no issues with injury, but I thought that, overall, he looks as though he is living up to that big price tag.

“He really rose to the occasion on Thursday night and he can be a huge player for the club over the next couple of seasons.

“He is still learning the game and he is doing it with an already hefty price tag on his shoulders, but he really does have that bit of quality.”

Edouard, who notched 11 goals while on loan last season, showed enough for boss Brendan Rodgers to break the club’s record transfer fee by paying £9million to French giants Paris Saint-Germain in the summer to land the exciting youngster on a four-year deal.

Dembele quit the champions on deadline day in a £19.7million switch to Lyon, a move which immediately saw his countryman move up the pecking order for frontline places at Parkhead.

With Leigh Griffiths sidelined, Edouard has accepted the challenge in magnificent fashion and is likely to spearhead the attack at Livingston in the noon kick-off tomorrow.