BERTIE AULD reckons Ryan Christle is following in his footsteps as he emerges as a key member of Brendan Rodgers’ Celtic squad.

The Lisbon Lion can see parallel lines as the Highlander stakes his claim after agreeing a three-year deal last week.

Auld, 80, said: “I had to leave Celtic when I was a teenager to get the confidence to return and prove I was good enough for the top side.

“I was only 18 when I was told Dumbarton were interested in taking me on loan. They were in the old Second Division back in 1956 and it might have been seen by many as a step down.

“As ever, I discussed things with my dad, Joe. I respected his advice and he told me: ‘Take it, son. It’ll be the making of you’.

“Back then, I wasn’t even guaranteed a game in the Celtic reserve team. The club always had a massive squad of players and, as a youngster who had arrived from Matyhill Harp the previous year, I had to be content with biding my time.

“Anyone who knows me will tell you how much I hated not playing football. I didn’t even like being on the bench when substitutes were introduced. I would have preferred to play for second team just to be involved.

“I wasn’t told I would be a regular in the Dumbarton top side, but I knew I would be more in focus and I realised I would also be given a chance.

“And, thankfully, that’s the way it turned out and I went back to Parkhead after a year. I can see something similar with Ryan. He arrived from Inverness Caley Thistle at the age of 20 in the summer of 2015 and was immediately loaned back to the Highlanders.

“Then, of course, he had 18 months with Aberdeen where he got used to first team football.

“At Pittodrie, he was working in an environment where he had to play consistently well to get a regular place in Derek McInnes’ line-up. And that’s the way it should be, of course. Competition keeps you sharp and Celtic and Ryan are now reaping the rewards from that stay up there.”

Auld insisted he has not been surprised by the rise of Christie in the past few weeks.

He said: “You could see the lad had ability. I would watch clips of him playing for the Dons on TV and I was impressed by a lot of what I witnessed. 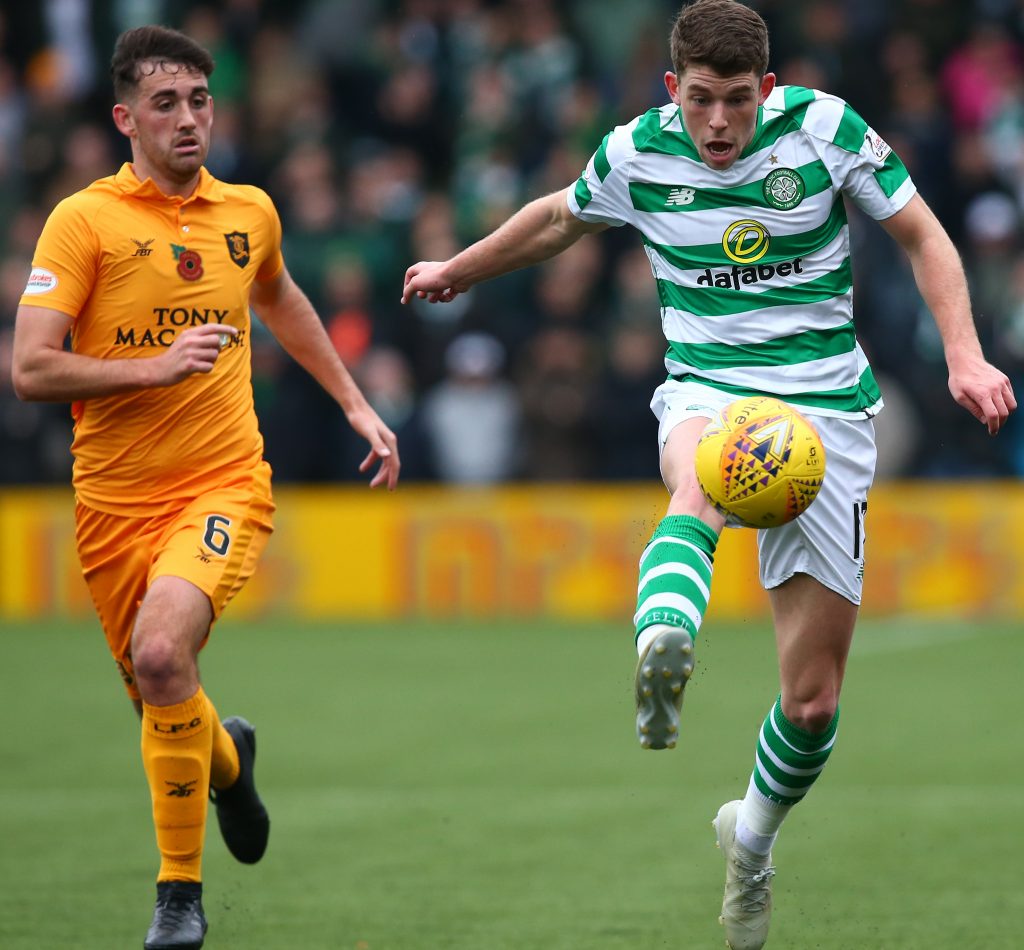 BY THE RIGHT…Ryan Christie brings the ball under control watched by Livingston’s Alan Lithgow in Sunday’s stalemate. Pic: Geo.

“Naturally, this was going to be a massive season for him as he went into the last year of his contract.

“It may have taken injuries to the likes of Scott Brown and Olivier Ntcham in the midfield to open the door for him, but you have to commend his attitude when he got his opportunity.

“He came on against Hearts in the League Cup semi-final at Murrayfield and took the game by the scruff of the neck and helped turn things around.

“It had been goalless at the interval and I think their keeper only had to make one save from a shot by Scott Sinclair.

“However, the introduction of Christie for the injured Ntcham at the interval turn the game on its head. Callum McGregir dropped deeper, Christie took a more offensive position in the middle of the park and he sealed an excellent 45 minutes with a superb third goal in the 3-0 win.

“I like his keenness to get on the ball, making himself available for a pass while giving team-mates options with thoughtful movement off the ball.

“I would have no fear of playing him on the right or left of the midfield and, like Tom Rogic, he is not slow to have a pop at goal from outside the box.

“Overall, I believe the lad is the real deal and I’m looking forward to seeing how he copes with regular games for the team.”

The Celtic great also praised the mental attitude of the 23-year-old playmaker.

He added: “Ryan could have made a big deal of the Livingston player, Dolly Menga, sticking his head in his face on Sunday.

“A lot of players would have gone as though they had just been struck by a wrecking ball. It says a lot for his concentration that he didn’t even think about getting an opponent sent off for an admittedly crude gesture.

“He simply pushed the opponent away and continued to do his job in defending a long throw-in from the right wing.

“I really think being away from Celtic will be the making of Ryan and I’m sure we will witness that in the coming months at home and abroad.”