DAVIE HAY reckons Celtic are on course to win their ninth successive title.

The Hoops legend acknowledges the work done by Neil Lennon after his return to the club’s hot-seat following Brendan Rodgers’ swift and unexpected departure to Leicester City in February.

The comeback gaffer steered the team to its eighth championship in a row while he overcame the quarter-final challenge of ex-club Hibs (2-0), the test from Aberdeen (3-0) in the last four and Hearts (2-1) in the Final to lift the Scottish Cup and complete the unprecedented treble treble.

Lennon has already won the Betfred League Cup after the 1-0 win over Steven Gerrard’s Ibrox side earlier this month – racking up his third silverware success inside a year – and he guided his team to a five-point advantage at the league’s pinnacle in their relentless pursuit for history-making glory.

Former manager and player Hay, now a club ambassador, told the Evening Times: “It looks as though Celtic may well reach their goal of going into the winter break eight points clear, and if they do, then the bookies will stop taking bets on the destination of the Premiership title.

“Okay, there are a few ifs and buts to come before such a scenario comes to pass, but you can’t underestimate the importance of such a lead from a psychological point of view going into the winter break. For Celtic and for Rangers.

“It was no surprise to hear Celtic manager Neil Lennon say that the pressure is now on Rangers after that win at Hearts and, while there is obviously an element of mind games going on, I think there is a lot of truth in that, too. 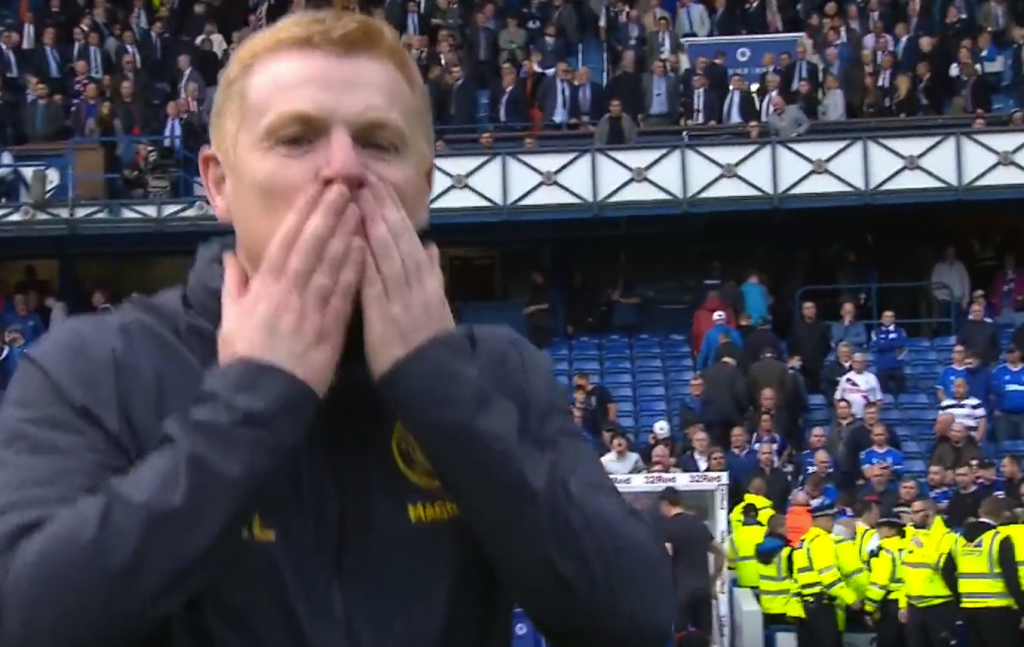 GOVAN GLEE…Neil Lennon expresses his joy after the 2-0 win at Ibrox in September.

“Rangers manager Steven Gerrard has backed his men to block that out and churn out the results they need to narrow the gap once more, but it is a different challenge for them now with that little bit of daylight between the teams.

“All season it has been nip and tuck from day to day over a weekend depending on who was playing first, but now Rangers are chasing their rivals.

“Rangers know they can’t afford to let anything slip at all before the game at Celtic Park. They don’t want that possible margin of eight points being even greater and, if they have any designs on ending their long trophy drought, I don’t think they can afford it to be, either.

“It is so important for Rangers to stay on Celtic’s coattails. If they have any slip up at all, they will go into the game at Celtic Park almost having to win it and they don’t need me to remind them that they haven’t done that for a good long while.”

The Hoops take on Hay’s former club St Mirren in Paisley tomorrow afternoon where three points are a must and managerless Kilmarnock visit Ibrox. If, as expected, both Glasgow sides win, it will set up a dramatic end-of-year confrontation.

Lennon’s side will undoubtedly go into the game looking for the three points that will pile the stress on Gerrard and Co.