The £10million French ace has started the season on fire and declared himself fit for the first Glasgow derby of the term after limping off in the second-half of the 4-1 mauling of AIK in Stockholm in the Europa League play-off second leg, as CQN reported.

Edouard is now ready to lead the line against Steven Gerrard’s outfit with the possibility of new Bhoy Mohamed Elyounoussi, who joined on a season-long loan from Southampton last night, Vakoun Issouf Bayo or Leigh Griffiths as back-up.

The youngster emphasised his power in March last season against the Govan men when he scored a superb solo opener and then set up the winner for James Forrest in the 2-1 triumph at Parkhead. Of course, he has also sampled the joy of a winning strike at Ibrox when he curled in an exquisite effort in a 3-2 victory the previous year. 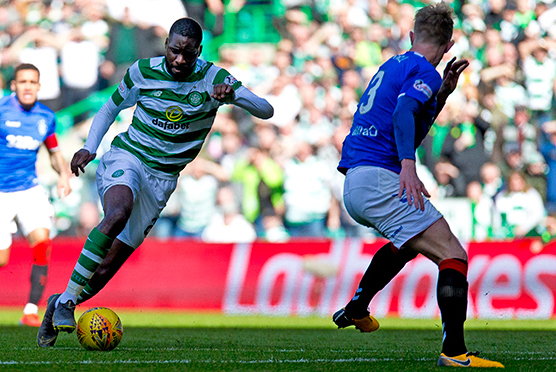 PARADISE DELAYED…Odsonne Edouard prepares to race away from Joe Worrell on his way to scoring the opening goal in March.

The club icon, speaking to the Evening Times, said: “I’ve always been a huge fan of Odsonne Edouard.

“I know that sometimes people say he looks lethargic, but I’m not having that at all and he is really starting to show just what a classy operator he is.

“He suffered a little early in his Celtic career in that he was compared to Moussa Dembele. The price-tag, of course, is something that is held against him when he isn’t quite at his best. 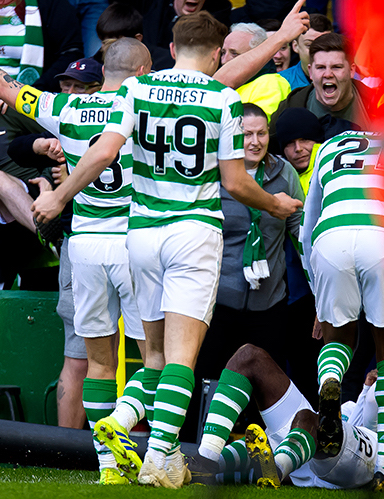 HAIL THE HERO…Odsonne Edouard sits it out as his team-mates celebrate his goal against the Ibrox men in the 2-1 win.

“But, while he isn’t as strong as Dembele, I think he is a fair bit quicker and he has a real nose for goal now. That’s not to say he should be underestimated physically, either. He’s a big laddie and he’s a handful for defenders.

“He’s great at holding the ball up and bringing his team-mates into the game, too, and if he gets a sniff of a chance it will be in the back of the net in a flash, so he has all the makings of becoming a real top-class striker.

“I know that a lot of focus has been on the attacking arsenal at the disposal of Rangers for tomorrow’s game, but Edouard could well make all the difference with the quality he has.

“There is no doubt that Alfredo Morelos and Jermain Defoe are capable of finding the net, but Edouard’s quality marks him out as a potential matchwinner for Celtic.”