Celtic Quick News on News Now
You are at:Home»Latest News»LEGEND TIPS NEW CELTIC BOSS: ‘I HAVE NO DOUBT HE HAS WHAT IT TAKES’
By CQN Magazine on 26th November 2019 Latest News

The Hoops gaffer insisted his highly-rated assistant has all the qualities to step up the managerial ladder, as CQN reported yesterday.

Former team boss and player Hay, speaking to the Evening Times, said: “Some years ago, I had the privilege of seeing John Kennedy at work at Barrowfield with a group of kids and I could tell right there and then he would go on to be a great asset to Celtic as a coach.

“Even so, he has surpassed probably even my high expectations of him with the impact he has had at the club in the years since, so much so that he is now Neil Lennon’s right-hand man.

“It was, therefore, no surprise to me whatsoever that other people would have taken notice of what he was doing at Celtic and, as is always the case in football, there will be other clubs hoping to lure your best talent away.

“This time, despite concrete interest from Hibernian in taking John as their manager, he will stay at Celtic following the appointment of Jack Ross as the man in charge at Easter Road.

“For me, though, it is only a matter of time before John Kennedy is a manager in his own right, whether that be at Celtic or elsewhere.

“I have no doubt he has what it takes to be the Celtic manager one day and Neil Lennon, as well as one or two players recently, have been singing his praises. The trouble for John is that Neil Lennon doesn’t look like he will be going anywhere for a good long while yet. 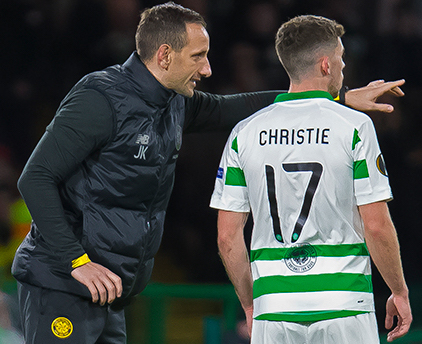 TOUCHLINE TALK…John Kennedy makes a point to Ryan Christie during the 2-1 win over Lazio at Parkhead.

“Luckily, he is a young man at just 36, so time is very much on his side. If he stays where he is, then there is every chance that when the time eventually comes for Neil Lennon to move on for whatever reason, he will be the man who assumes the mantle.

“Given how close the Celtic coaching team seem to be, as well as the success they are currently having as a unit, that would certainly seem like the natural move to allow the continuation of that winning formula.

“You can’t underestimate the roles that Damien Duff and Stevie Woods play in that, too, because they are clearly playing an integral part in the development of this Celtic squad. You only have to listen to Fraser Forster waxing lyrical about Woods, for example, to know that the blend Celtic have behind the scenes at the moment is one that the players are thriving under.

“It will be a shame for the club when that eventually breaks up, but the only question is whether or not John sees himself as a number one before Neil is ready to hand over the reins.

“Some people may say he is very young to be taking on a role of such magnitude at present, or any managerial role for that matter, but I was 33 when I took over as manager of Motherwell and then I was Celtic manager less than two years later.

“When you look at it like that, he may see fit to soon continue his journey elsewhere, cutting his teeth at another club as his own man, while having an eye on returning to assume the Celtic hot-seat one day in the future.”

Kennedy has made rapid progress through the ranks at Parkhead since his playing days were tragically cut short at the age of 21 when he sustained an injury playing for Scotland in a friendly against Romania at Hampden.

He looked after the youths at the club before he took his initial step towards the dug-out when he was promoted onto the coaching staff by Ronny Deila in 2014.

Kennedy was also moved up the pecking order when Brendan Rodgers replaced the Norwegian two years later and he was handed the No.2 post in February when the Irishman quit for Leicester City.

Lennon arrived and the double-act helped to steer the club to the unprecedented treble treble.

It looks as though the only way is up for the former centre-half.