JOHN HARTSON admits Odsonne Edouard possesses the ‘wow factor’, but the Celtic legend insists the Frenchman still has work to do on his game.

The former Welsh international striker has spotted a flaw in the Hoops’ £10million record signing that can lead to frustration.

Edouard, 21, who scored 11 goals during his initial loan season from Paris Saint-Germain, did enough to persuade ex-boss Brendan Rogers to break the bank to make the deal permanent.

He has already contributed two extremely important strikes since Neil Lennon returned three weeks ago in a dramatic change of events in the history of the Parkhead club following Rodgers’ sudden exit to mid-table Leicester City.

It was Edouard who led the charge towards three points in the crucial encounter against Hearts at Tynecastle only 24 hours after the managerial switch.

The French Under-21 star knocked in the points-clincher against the Edinburgh outfit in the second minute of stoppage time. 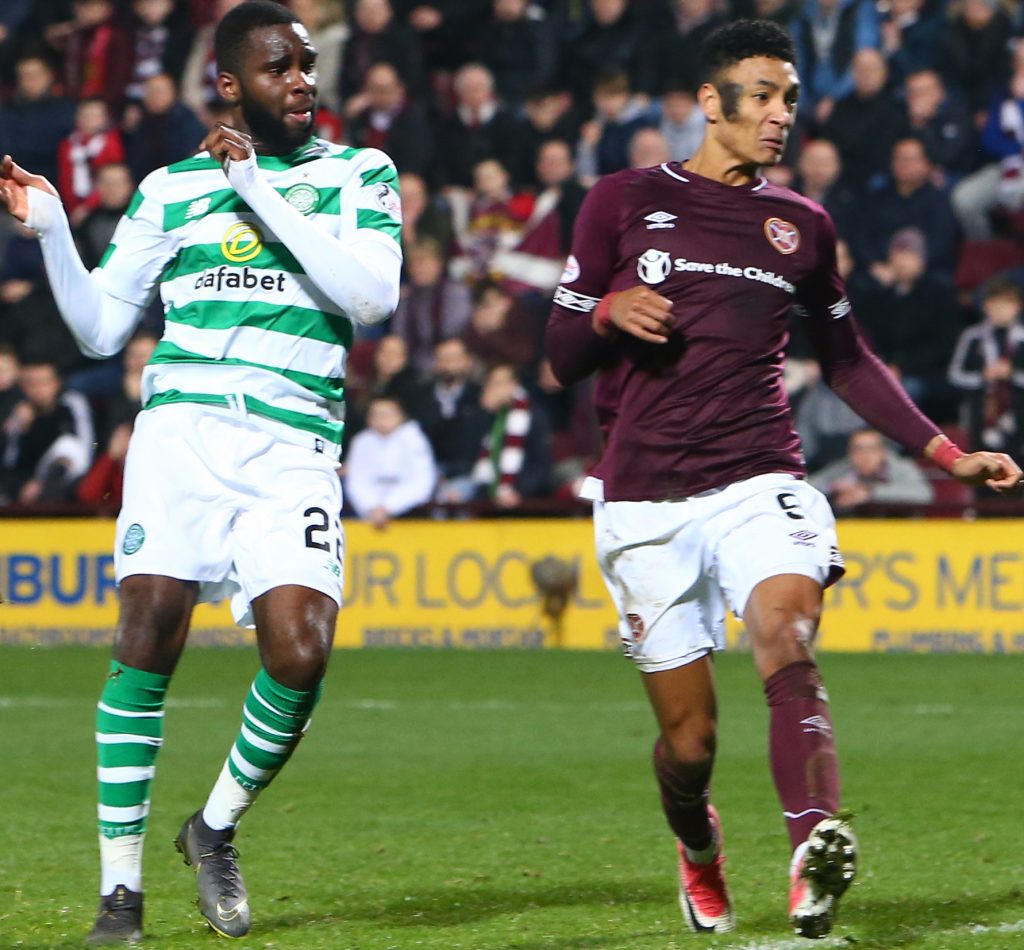 BETTER LATE THAN NEVER…Odsonne Edouard nets the winner against Hearts.

And he left it even later against Dundee at Dens Park on Sunday when he rattled in the winner with the game going into the sixth minute of stoppage time.

But former Celtic goal hero Hartson is still not completely convinced – although he admitted he was loathe to be over-critical of the powerfully-built youngster.

Hartson, speaking in the Evening Times, said: “Odsonne Edouard is a funny player.

“I don’t think you can criticise a guy who has netted 18 goals this season and have got you out of jail twice with last-minute goals in recent weeks, but I do think there is an element of frustration about him at times, too.

“The first time I really took note of Edouard, like most people I would imagine, was that 3-2 win over Rangers at Ibrox last March. He comes on and wins the game and I remember thinking: ‘Wow, this kid is something’.

“He has pace, he has strength, he can score, he does have all the tools to really be a first-class striker. But I just keep thinking that there is so much still to come from him.

“There is an element of frustration to watching him sometimes because you just feel that if he tidied up one or two aspects of his game then he would be a really serious player for Celtic.

BETTER LATE THAN NEVER…Odsonne Edouard grabs the points-clincher against Dundee.

“But he is still very young, so I am not pointing the finger. He has scored big goals and he has responded to the big occasion and that is what separates the top players.

“So, he has that. But there are definitely things that he has to work on.

“In too many of the European games the ball seemed to come off of him and at that level you just can’t afford to do that. I always remember from my own time at Celtic that if I gave the ball away Neil Lennon would always be the one who would have a go the minute we stepped foot in the dressing room at half-time.

“On nights like that you are the focal point and you have to rise to the occasion. But right now I don’t think that he will get too much stick so long as he is digging everyone out of a hole in the last minute of games.

“We had Henrik Larsson to do that for us – and he done it on too many occasions to mention – so he is going in the right direction.”