NEIL LENNON admitted to being nervous before Celtic’s 2-0 triumph over his old club Hibs at Easter Road, as CQN reported last night.

The returning Hoops boss, who accepted the role on an interim basis on Tuesday after Brendan Rodgers’ shock defection to Leicester City, was forced to take the champions to two dangerous trips to Edinburgh in the space of four days.

Lennon overcame the first hurdle against Hearts at Tynecastle on Wednesday when Odsonne Edouard claimed a stoppage-time points-clincher in a 2-1 victory to keep the title kings eight clear in their pursuit of their eighth successive crown.

Next up was a surreal visit to Easter Road in the Scottish Cup quarter-final to take on the team he left in acrimonious circumstances in January.

The Irishman admitted to feeling anxious, but two old favourites in the shape of James Forrest and skipper Scott Brown took centre stage after the turnaround and netted the goals that put Celtic into tomorrow night’s semi-final draw as the Parkhead men look for a hat-trick in the national competition for the first time in their history. 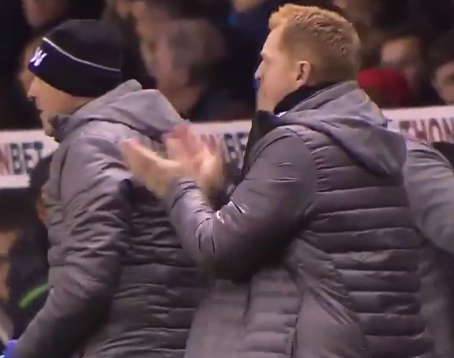 Lennon, speaking to the Daily Mail, said: “It was a long day. My stomach was churning when I woke up. I had to go for a walk, I had to come back and get some fresh air.

“It is a quick turnaround. It was difficult leaving Hibs, but it has worked out okay, I think. Now my whole focus is on Celtic.

“We are not getting carried away. It is only two games, but you have to remember what an influence Brendan Rodgers was, not just on the players, but on the club with the philosophy he brought here.

“So, it’s relief. Because I didn’t want to come in after 24 Cup games and be the one who spoils that run. Or have people pointing the finger at you.

“I’m really, really pleased we accomplished that here and I have to pitch it to John Kennedy, Damien Duff, Stevie Woods and the staff for helping me out the last few days.

“I do need a couple of days of myself. I don’t know where I am. Glasgow or Edinburgh!

“I’ll have a chat with Peter Lawwell about things, give the staff a rest, as well, because it’s been very tumultuous for everyone.”

Reflecting on the battling performance from his players against opponents who were well up for the challenge against their former gaffer, Lennon added: “I got everything I wanted.

“That was an outstanding performance by the team. We had total control. 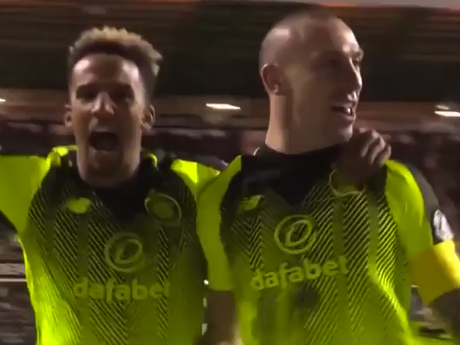 CHEERS…Scott Sinclair and Scott Brown after the skipper’s goal.

“The second-half was as good as I have seen them play for a while. And then, brilliant mentality.

“It has been a very, very difficult week for them all – physically and emotionally.

“So, for them to go out and play the way they did speaks volumes for this group of players.

“I haven’t seen them play against Hibs like that for a while, especially here.

“It’s been very hurly burly, very difficult, a lot of reaction here and there, but they’ve kept their focus really well in two really difficult games – Hearts and Hibs away.

“We’ve got another one on Saturday, but I think the rest will do them good. We can nurse a few back and go against Aberdeen on Saturday.”