The Celtic boss also described the SFA charge facing his captain Scott Brown as “trumped up”.

Lennon, preparing is players for tomorrow’s game against Livingston at Parkhead where the champions can move SIXTEEN points clear the top of the Premiership, was responding to some of the fall-out following the fracas at the end of the 2-1 victory at the weekend.

Rookie Govan gaffer Gerrard had claimed Ryan Kent’s punch in the face of the Hoops captain was NOT violent while footage and photographs clearly highlighted the unprovoked assault. 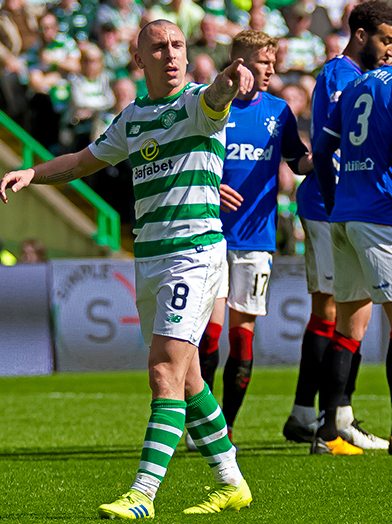 There were silly comments about the on-loan Liverpool winger merely shoving Brown when it was obvious he hit him with a clenched fist that felled the 33-year-old midfielder.

Lennon, speaking to STV, said: “The only rational thing Steven Gerrard has said this week is that they played the best team in the country on Sunday.”

Brown has been accused of breaching a rule which states players must act in the “best interests of Association Football”.

The Irishman insisted the club would “vigorously” defend the notice of complaint against their player.

He said: “I just think it is a trumped-up charge. It is something that has been made up.

“There is a law out there, from what I can gather, that you can’t retrospectively be punished for gestures, but it is not even an obscene gesture raising his hands aloft, it has just been concocted.

“Scott Brown doesn’t have to reproach himself for anything.

“Obviously, the club and myself will defend Scott vigorously on any charges because he has done very little, or nothing wrong.” THE WINNER…James Forrest runs away in delight after scoring the second goal.

A stormy encounter saw Brown elbowed in the jaw by controversial Colombian Alfredo Morelos that brought the striker his fifth red card of the campaign.

Apart from Kent, who has now been banned for two games for throwing a punch at the Hoops onfield leader, defender Andy Halliday was also shown a second yellow after the final whistle for confronting the former Scotland international stalwart.

Following aftrematch comments to referee Bobby Madden, Gerrard has also been suspended for one outing and will be in the Fir Park stand when his team travel to Motherwell on Sunday.

A win for Lennon’s men against Livi tomorrow in the east end of Glasgow and a defeat for the Ibrox side 24 hours later will see Celtic crowned champions for the EIGHTH successive season.