NEIL LENNON was the target for some fierce crticism from West Brom over his so-called treatment of £15million man Oliver Burke.

The Scotland international forward was brought to Celtic on loan from the Midlands outfit by ex-boss Brendan Rodgers in January.

Burke appeared keen to make the switch permanent, but Lennon wasn’t overly-impressed by his efforts when he arrived in February and the 22-year-old returned to the Championship side last month.

The erratic attacker split opinion among the Hoops support while club legend John ‘Yogi’ Hughes, in an interview with CQN, urged the champions to buy him.

However, a lacklustre display in the 2-0 loss at Ibrox on May 12 – coupled with a glaring miss near the end that would have thrown the Hoops a lifeline – went a long way to sealing his fate.

He started against Hearts on Flag Day the following week, but once again looked out of sorts and was replaced by 16-year-old sensation Karamoko Dembele at the interval.

There was no place for Burke in Lennon’s Scottish Cup Final squad against the the Tynecastle outfit when the phenomenal treble treble was achieved on May 25.

West Brom technical director Luke Dowling revealed the club were incensed at the Irishman’s handling of their player. 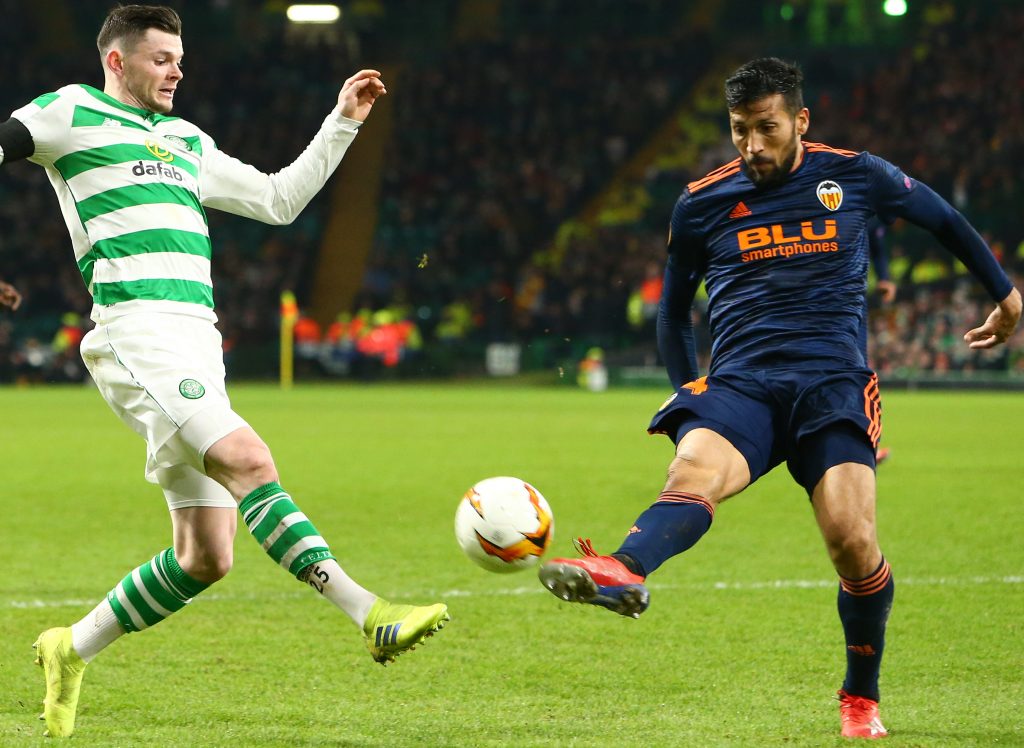 SPANISH SIGHS..Oliver Burke in action against Valencia in February.

Speaking in the Daily Record, he said: “He won’t be going anywhere near Celtic with the current manager.

“We sent Olly to Celtic in good faith with Brendan Rodgers and Lee Congerton, there were

“Once Brendan left to go to Leicester the treatment he got from the manager that’s in place now is something we don’t expect for one of our players.

“He won’t be going anywhere near Celtic FC. We currently have a new manager (Slaven Bilic) who is excited to start working and looking at Olly.

”We believe he’s got an opportunity back here with a new manager. Through no fault of his own he’s been bought twice for £15million.

“When West Brom bought him, look at the games he’d started, I think there was only 19 in his career. Nineteen games and you’ve been sold twice for £15million.

“There was big expectation when Olly came here. Naturally, you’re going to get that when people pay that amount of money for you, but I don’t believe he really got the best chance to perform here.

“He’s had mixed messages and that’s why we thought going up to work with Brendan would be a good period for him to come back a better player and to improve on his game. But, unfortuantely, that wasn’t to be. He needs stability.”

Asked if he could be more specific about the player’s time in Glasgow, Dowling added: “They know what’s gone on and Olly certainly knows what’s gone on. It’s just something we’re not happy with at all.”

It is, of course, possible Dowling is upset at the prospect of losing highly-rated midfielder Rekeem Harper to Lennon and Celtic in a cross-border transfer this summer.