NEIL LENNON reckons Ewan Henderson’s loan move to Ross County will boost his chances of becoming a success at Celtic.

Callum McGregor quit the Hoops for a temporary stint with Notts County in season 2013/14 and scored 13 goals in 37 appearances.

The English side wanted to make his stay permanent, but he was recalled by incoming Parkhead boss Ronny Deila who gave him his debut against KR Rejkyavik in July 2014.

McGregor scored the only goal of the Champions League qualifier in Iceland. And the rest, as they say, is history.

Henderson, who made his first top side appearances against Kilmarnock in May last year, could use the Scotland international as inspiration as he heads for the Highlands for the rest of the campaign. 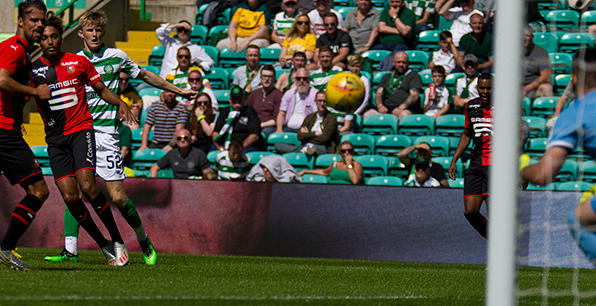 NEAR MISS…Ewan Henderson has a shot at goal in the 0-0 draw with Rennes in the July friendly.

And the Dingwall side’s co-boss Stuart Kettlewell, who shares the managerial duties with Steven Ferguson, believes the 19-year-old midfielder will flourish at County.

The Staggies gaffer, speaking to the Press and Journal, said: “Ewan comes with a good education and schooling in football, and he’s had a taste of first-team action at Celtic.

“We were looking to bring in that type of player to give us another option in the middle of the pitch.

“Having had a chat with Neil Lennon and Chris McCart at Celtic, it became very apparent what they think of Ewan.

“They believe this will be the next step in his development, as it’s extremely difficult to break into that first 11 at Celtic.

“We feel he gives us a different dimension in terms of what he brings to the table.

“He’s one that Steven Ferguson and myself are excited to get into the building and get working with, as he’s quite clearly a talented kid.

“It looks like he has a bright future and we’re confident he can start to maximise his potential at Ross County.”