CALLUM McGREGOR will lead Celtic against Hibs in the Betfred League Cup semi-final at Hampden tonight – if Scott Brown fails to overcome an injury.

Neil Lennon reckons the Scotland international is captain material and believes he could be a long-term successor to the his 34-year-old midfield team-mate.

The Hoops boss has been impressed by McGregor and backs him to handle the responsibility.

Lennon, speaking to the Scottish Sun, said: “I would have no qualms handing Callum the armband against Hibs.

“I see him as a natural successor to Broony in that regard, when the time comes. We have two or three captains in that dressing room.

“Christopher Jullien could do it, Kris Ajer takes responsibility, James Forrest is a bit quieter and I don’t think he’d fancy it!

“But there’s a few who wouldn’t shy away from taking the armband — and Callum is one. His performance levels over the years have been so consistent and he’s playing as well as ever at the minute.

“Callum’s consistency is not something I take for granted. People just expect him to be a seven or eight out of 10 every week. That’s not an easy thing to do and I admire him for it.

“I admire his professionalism because he’s playing at a really high level while there has been interest in him. 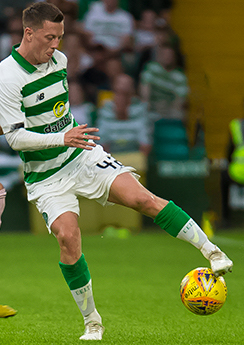 “When you are playing well you want to keep the momentum going, but I spoke to him before the St Mirren game, asking him if he wanted a break.

“But he said: ‘No, I want to keep going’. That was the answer I expected because when you are playing well you want to stay in the groove.”

Lennon also wants McGregor to pledge his future to the champions after interest from ex-boss Brendan Rodgers at Leicester City in the summer transfer window.

The Irishman added: “We’re talking to one or two players, so, hopefully, we can get those contracts over the line soon.

“Callum is one of them. He’s an important player and it would be good to get him tied down, too.

“It’s important to have your core and the core players here have been outstanding for the last three seasons.

“Jamesy has been a fundamental part of that, as has Scott Bain and it gives you a feelgood factor when you have boys committing themselves to the club on long-term contracts.

“Ajer is also one we might look at. He’s played nearly all the games since I’ve been in and I’m very happy with him, as well.

“These players are obviously assets, too, and there will be admirers out there, no question, with the way they are playing. So, it’s a bit of protection for us as well as settling down the players if they are getting agitated by a little bit of speculation.”