NEIL LENNON has revealed he warned his Celtic players what to expect against “dangerous” Livingston yesterday.

New Bhoys such as Christopher Jullien, Boli Bolingoli, Moritz Bauer, Mohamed Elyounoussi and Vakoun Issouf Bayo all played on the artificial surface for the first time in their Hoops careers.

The champions toiled to spark against Hamilton Accies earlier in the campaign on their plastic pitch and had to rely on an early goal from James Forrest for the points.

However, they had no such luxury against Gary Holt’s fired-up battlers who threw themselves into challenges right from the kick-off and got their reward with second-half goals from Scott Robinson and Lyndon Dykes.

A disappointed Lennon, speaking to the Evening Times, said: “You can’t panic, but I am expecting better.

“I did tell them before the game that the fixture was a concern. It’s a dangerous opponent in a dangerous environment. I knew Livi would up for it and they were. We needed to match that.

“It’s a poor result. We started the game okay, we were quite bright and there was a good tempo and intensity. Then we lose Ryan very early and we have to readjust.

“We were okay going in at half-time and I felt we could go on and win it. But it was really passive from us for the first goal and then we have tried to force the issue with 10 men.

“We put a certain amount of pressure on the goal without working the keeper enough. 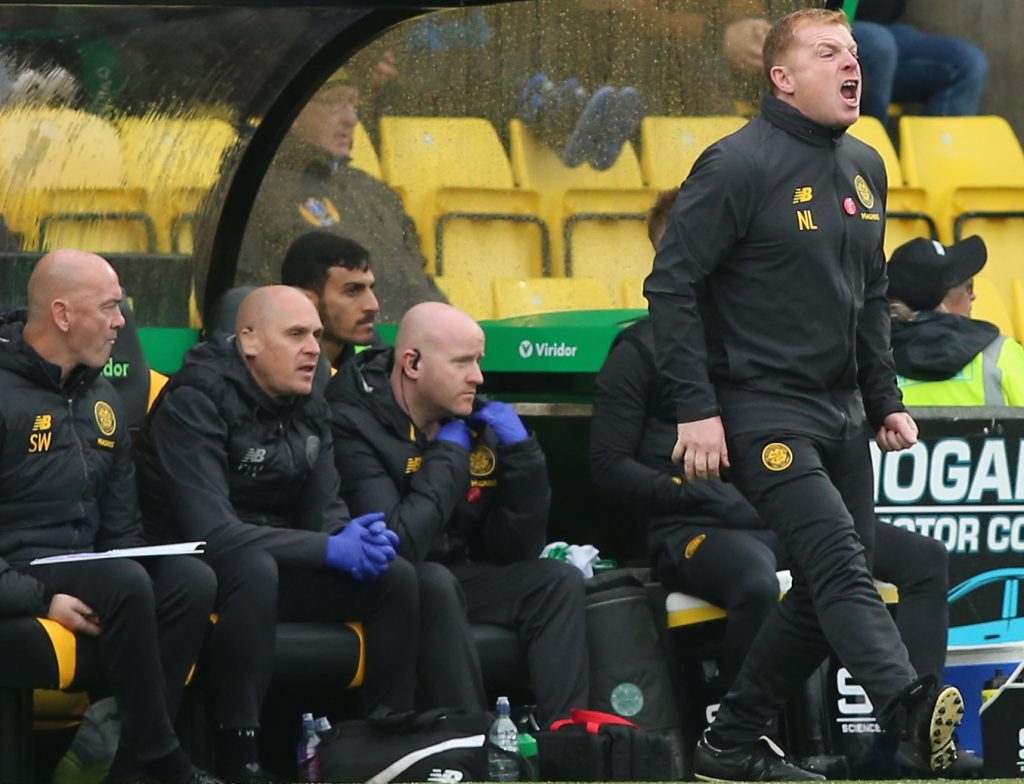 FOR CRYING OUT LOUD…Neil Lennon shouts out orders to his under-performing players.

“Our decision-making wasn’t great at times and then we should be doing better at the second goal. We should be dealing with that.

“It’s possibly down to fatigue. They are human beings and they put a lot into the game on Thursday. Then you need to play a long time with 10 men, so that could have been a factor.

“I hoped the subs would help us, but they didn’t really impact the game as we would have liked.

“I didn’t really think about making more changes. We put a strong team out. We were comfortable early on in a difficult environment without really testing their goal.

“I felt we were in control until the red card.”

Lennon was also left fuming at the lack of intensity from his players when they allowed Robbie Crawford time and space on the edge of the area to pick out Robinson for the first goal.

He added: “We let Crawford get turned far too easily and he was able to play the pass.

“We should be up on him, making him go the other way. We work on that and we are normally aggressive around our own defensive box.

“That was disappointing, but you still think: ‘Eventually we will get one’. But the second goal put a huge dent in that and it’s a poor goal. It’s a straight ball over the top and Dykes got in behind the two centre-halves.

“It’s a great finish, but he should never get to that position.”

The killer goal highlighted all that was out of sorts with Celtic in a below-par performance. Keeper Fraser Forster was slow to react to the ball arriving in his penalty area and could have expected more cover from Kristoffer Ajer and Christopher Jullien.

On another day, it’s mopped up without any hesitation. Yesterday it produced yet another catastrophe against a workmanlike side who simply gave their all for the entire game and knocked the champions out of their stride.